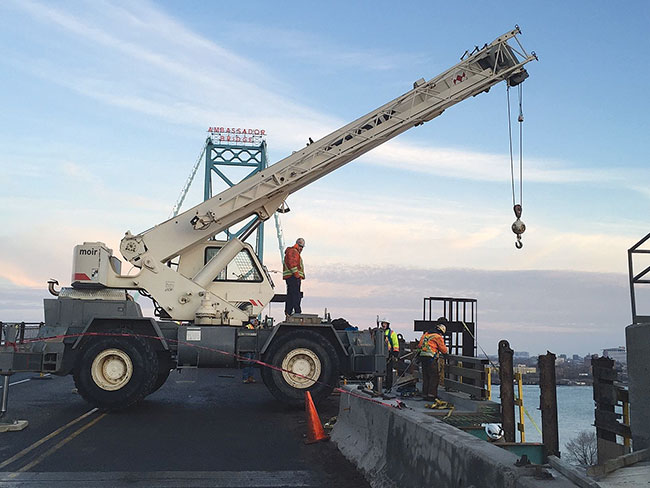 Moir Crane Services works on the Ambassador Bridge, which connects Windsor and Detroit.

Over 120 years ago, Alexander Moir arrived in Windsor, Ont., having taken a job as manager for the Shedden Forwarding Company. Seeing a growing market for cartage services, Alexander and his children formed their own company, Moir Cartage. In the early 1960’s, James Moir Sr. led the company to purchase its first crane.

His son, Moir Crane Service president Randy Moir, says that there had long been a lifting element to the company all the way back to when telephone poles were mounted on the backs of trucks to help maneuver loads off trains in the early 1900’s.

“It was generally recognized to be a cartage company,” Randy says. “My father felt that there was a need for cranes, no longer needing these poles on the back of a truck. From there, it grew and became a crane rental company, a machinery moving company and a trucking company.”

Promoted to a leadership role in 1980, Randy oversaw a significant expansion of the business which included employing over 100 people at its peak.

Open to all sectors 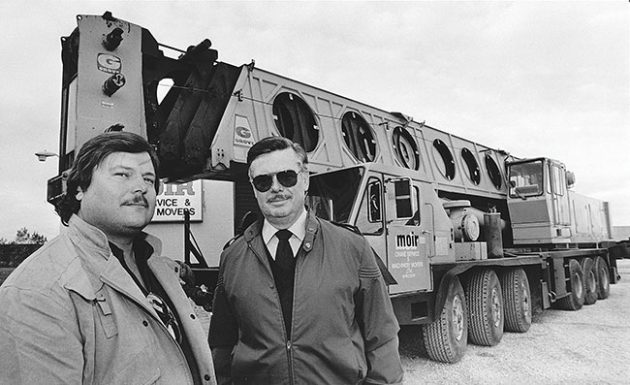 Randy Moir (left) and his father James Moir Sr. pose with one of the company’s cranes.

Today, Moir Crane Service provides taxi-style crane rentals throughout Windsor-Essex County and southwest Ontario. Randy notes that they will take on any customer, with no preference to any specific industry or sector.

“There’s really no limitation on who we rent to,” Randy says. “You might be a homeowner that wants to put a hot tub in your backyard, or it could be building a new bridge for the federal government. It’s pretty much wide open. It’s construction, it’s homes, it’s buildings, it’s precast concrete, it’s HVAC units. It’s everything.”

The company’s fleet of 10 cranes range from a 17-ton boom truck up to a 300-ton all-terrain crane. Randy says that, as a relatively small family-owned business, they must pick and choose which cranes best service their needs and those of their customers. While most of their cranes were manufactured by Grove (Manitowoc), the company also utilizes a variety of Liebherr, Link-Belt, National Crane (Manitowoc) and Terex cranes.

“The first crane that we had was a conventional lattice boom crane,” Randy says. “We evolved from conventional cranes to hydraulic cranes because we are doing taxi work running all over doing a variety of jobs. Hydraulics are the most efficient for the people that we serve.”

Moir Crane Service continues to grow and expand their operations over time. Randy says five years ago he would never have expected that the company would own a 300-ton crane, but the 300-ton Grove they purchased last year as been incredibly busy ever since.

“Our biggest crane up to that point was a 200-ton crane – it was getting older, and it was time to look at updating it,” says Randy. “And the market had changed over the last decade, whereby we knew that we were bringing in cranes from out of town to cover the 250- to 300-ton range. So, we felt if we were going to update that 200, we might as well take it up a notch and try and capture as much of the local market for bigger cranes as we could.” 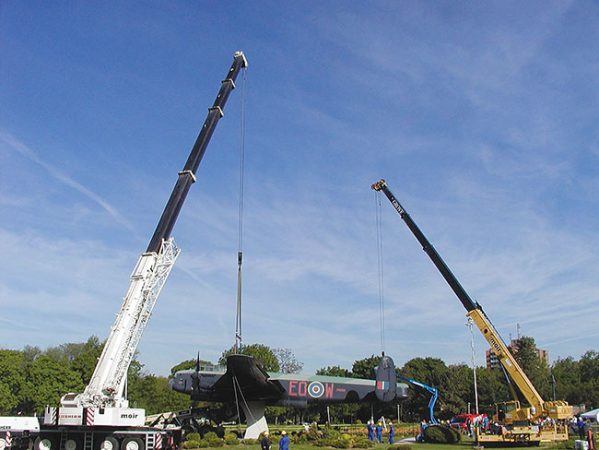 Moir Crane Service are in the midst of two significant crane projects currently – the construction of the new Gordie Howe International Bridge and work on the existing Ambassador Bridge. The Ambassador Bridge work is a full-circle moment for the company. In November 1929, Moir Cartage hauled the first commercial load across the bridge. But the company has taken part in a variety of standout projects in its long history.

“The Canadian Historical Aircraft Association brought in a Lancaster bomber and renovated it – we’ve moved it a few times, we’re helping them renovate it again,” Randy says. “We were a big part of work for Casino Windsor. Every major project in this area in the last 100 years, we’ve likely had a piece of that pie. We just happen to be at the right time in the right place. We’ve had great customers. It keeps us going.”

The company has also provided cranes for projects such as the Herb Gray Parkway, the University of Windsor’s engineering facility building, an expansion at St. Clair College and Windsor’s City Hall.

Living up to a legacy

While having a company that has been something of a fixture in an area carries benefits, taking part in the long heritage of the Moir family in the business can be daunting. Randy says he struggled initially working under his father.

“He was a pretty strong-willed gentleman,” Randy says. “He and I butted heads for a few years, but ultimately, I guess I showed him that I was able to take this on and I expanded the business tenfold and at that point, I took over.”

Randy acknowledges that his daughter, Shannon Moir-Riendeau, probably struggled similarly while working under him initially.

“I can be a little headstrong,” Randy admits. “But now I’ve basically started to back off and she’s pretty much handling ninety-five per cent of what goes on here. And we do quite well working together. I don’t think too many companies can say, ‘my daughter, Shannon, is a fifth generation of the family involved in the business.’ And she has two children who, you never know, maybe they’re coming up.”

In addition to her current role as vice-president of operations, Shannon has also integrated herself into the wider crane industry. She currently serves as secretary-treasurer for the Crane Rental Association of Canada (CRAC) and in 2023 will follow in her father’s footsteps and become a chairperson. She also serves as the president of the Windsor Executives Association.

“I’m learning a lot,” Shannon says. “This has been new to me in the last three years. I’m learning more about the industry itself being involved with CRAC now. And then being involved in the city and the associations, I’m meeting a lot of good people and that eventually turns into business relationships and recommendations and referrals.”

From her viewpoint, helping to steer a well-established business with a long history and good relationships in the community, the biggest challenge the company faces today is finding enough qualified workers amid a labour shortage.

“We’re having a hard time with that,” Shannon says. “We do have a couple of apprentices working their way up, but there’s a shortage of workers at this point.”