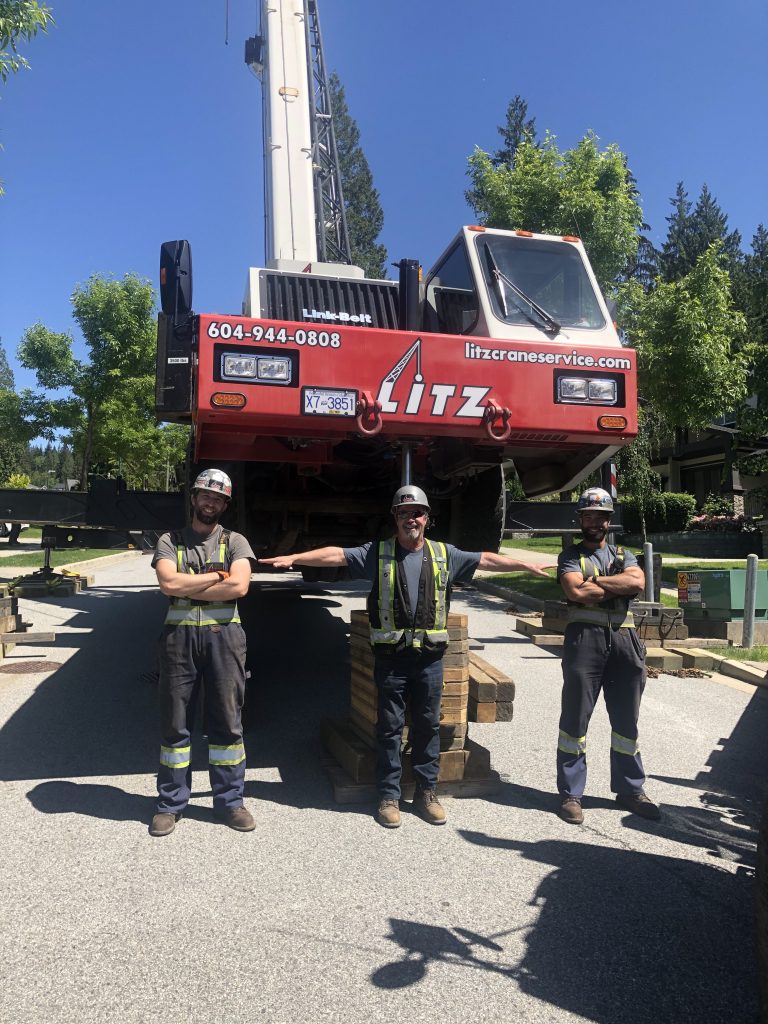 The third and fourth generations of Litz family crane operators – (from left) Jared, Gord and Michael.

After almost 25 years of running British Columbia’s Litz Crane Service Ltd., Gord Litz is eyeing a retirement within the next year. However, he expects to still be involved in some capacity with the business when his sons Jared and Michael take over for him.

“I’ll still be hanging around and bugging these guys,” says Gord with a laugh. “Once I started the company, I always said it would be nice if I got the boys involved. Both of them are doing a bang-up job and I couldn’t be prouder.”

Gord, a third-generation crane operator, started with his father’s business, Litz and Sons Company Ltd. in Winnipeg – now closed, the company was recently in the news after their former CFO was sentenced to prison for defrauding the company of more than $4.2 million. After leaving the family business, Gord was working for a large crane rental company in Vancouver when he decided to make a go of running his own crane business. In 1996, he remortgaged his home and bought his first crane.

“I just figured, I’m doing it for this guy or that guy, so why not do it for myself?” says Gord. “Nothing ventured, nothing gained. I was turning 35, I figured if I wait till 40 I’ll never have the balls to do it. So I figured I’ll give it a shot and see how it pans out. But it was a nerve-wracking summer of ’96, because I didn’t know if it was going to work out or not.”

A varied customer base

Litz Crane Service does ‘taxi work’ where the crane and operator are hired as a package deal. The company generally doesn’t undertake long term jobs that would keep them tied up for years at a time, but they work in all facets of the industry – industrial, civil, commercial and occasionally residential. 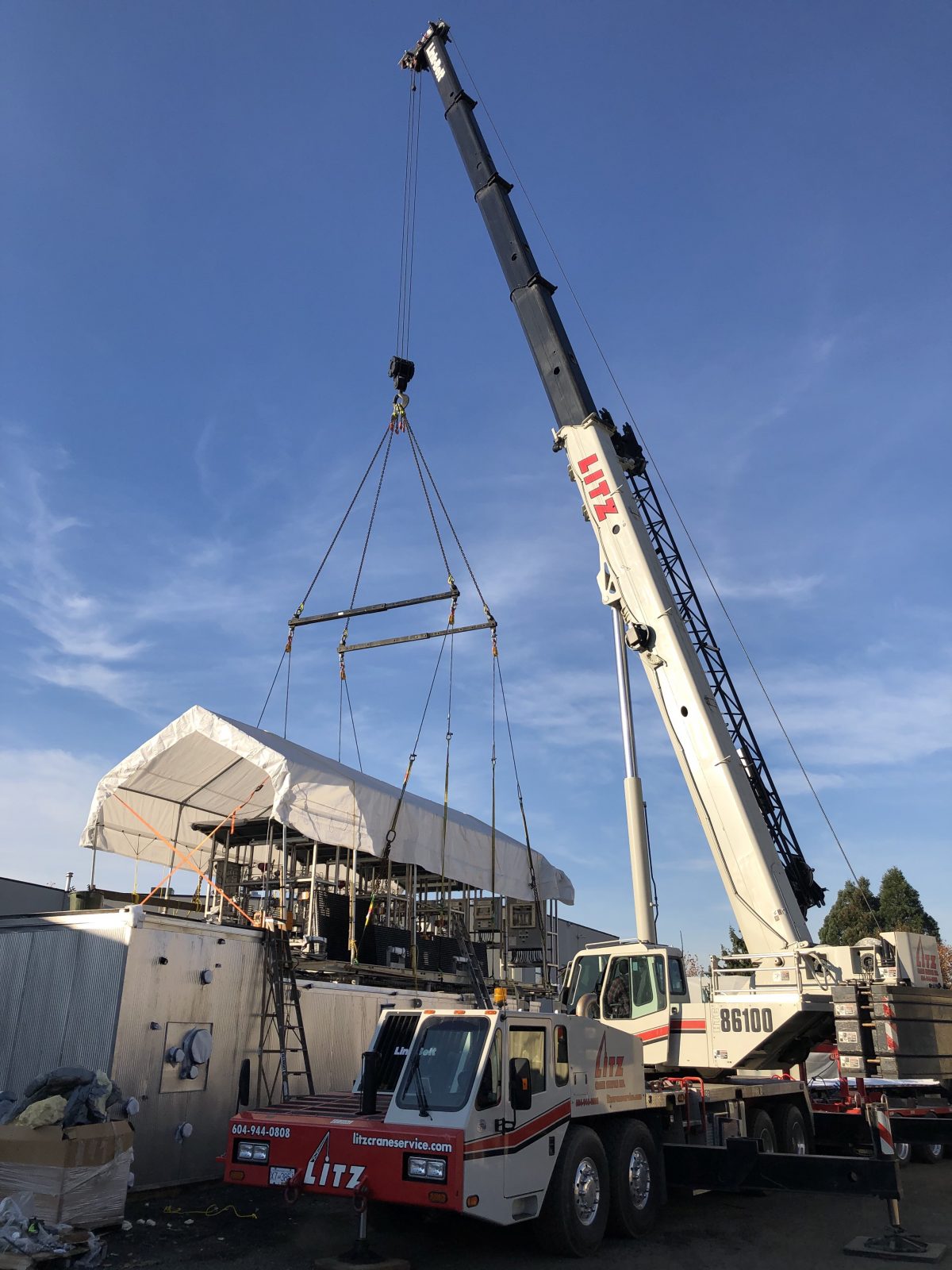 Litz Crane Service provides taxi-style crane work for a variety of customers in British Columbia in the industrial, civil, commercial and residential sectors.

“We do a lot of water work – new piping and this and that and we have a few different industrial plants that we work at,” says Gord. “But a lot of small stuff – small air conditioning companies, small steel outfits; that type of thing. We try to spread it around and do as much for as many different people as we can.”

To accommodate those varied customers, they own and operate 60, 70 and 100-ton mobile hydraulic cranes. For jobs requiring something further, Litz has some trusted partner companies who can provide cranes up to 270 tons.

“All our cranes are truck cranes,” says Gord. “We just bought a little 20-tonne knuckle boom – that’s something new for us. We bought that more to use as an in-house crane for hauling counterweights and stuff. But, lo and behold, we’re starting to pick up little jobs for that too.”

As he nears retirement, Gord notes that the company has evolved and grown over time – from just himself to a six-person team, and from just a single crane to now four mobile cranes and a boom truck. But his approach to the business has been consistent throughout.

“We just go out and try and do the best job we can and provide good service,” says Gord. “We’ll look at any job that anybody wants us to look at and make sure they get the right crane that’s going to handle the job. We want our customers to know they can rely on us.”

Both of Gord’s sons worked in other fields before joining the family business. Each kept crane work as a fall-back plan, but over time it became a more and more attractive option. 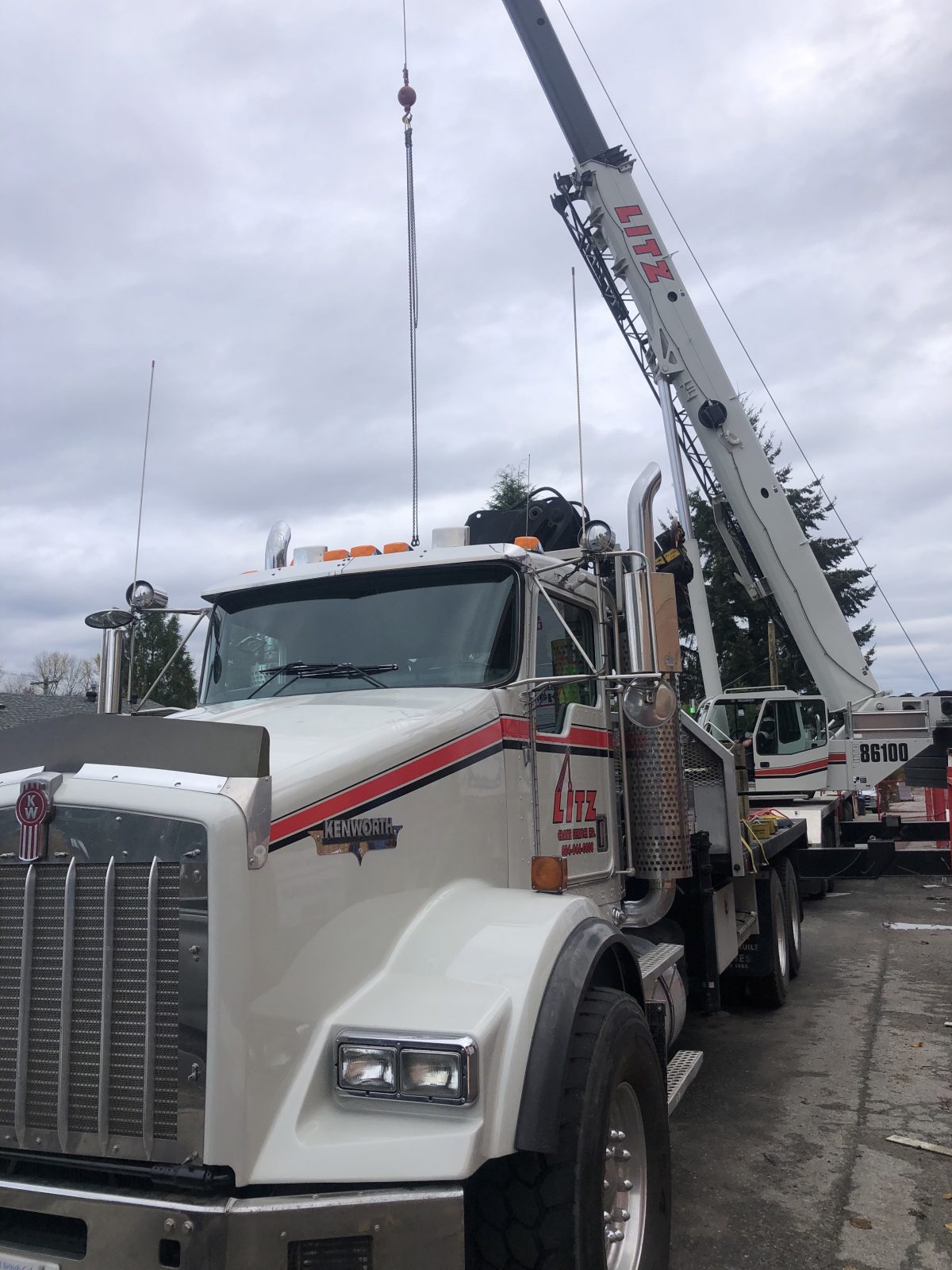 Over a quarter-century, Litz Crane Service has evolved from a single operator with a single crane to a six-person team with a variety of mobile hydraulic cranes.

“When I was young and growing up, my dad always said ‘you should join the family company,’” says Michael. “As a youth, you’re always like ‘No, I’m going to do something different,’ and you don’t really see sometimes the opportunity that’s been placed in front of you. I really love the job. It’s allowed me to have a pretty good life at age 29.”

Both brothers’ current job title is simply ‘Sales and Operations,’ though Jared says that he runs more of the day-to-day operations and Michael handles more of the behind-the-scenes work, such as taking care of billing and permits. The two have yet to determine what their titles will be after Gord’s retirement, but they have started assigning the duties that had been their father’s.

“He is still very much in the day to day operation,” says Michael. “We’re not cutting my dad out because he doesn’t want that quite yet. He wants to see that the company is going to do well without him.”

Neither brother is anticipating making drastic changes to the company when they take over – the business is successful and they aren’t going to mess with a winning formula. The brothers have discussed perhaps adding another crane in the 40 to 50-ton range, but are happy to remain a relatively small family company.

“I want to focus more on providing better service and having better equipment and more diverse rigging – focusing more on quality over quantity,” says Jared. “I’d like to see us break into the all-terrain category of cranes at some point. But the goal isn’t necessarily to get the company really big. I enjoy the job itself, so I don’t want to get too big so I get put in an office and don’t get to go to the job every day.”