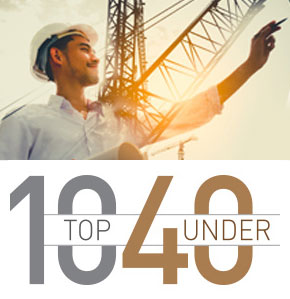 The Top 10 Under 40 recipients will be featured in the Crane and Hoist Canada Magazine.

Crane & Hoist Canada’s Top 10 Under 40 program recognizes 10 outstanding individuals who have made significant contributions to the industry before their 40th birthdays.

To nominate an individual, fill out this form.

Here are the guidelines:

Who can nominate someone? Nominators can include advisors, supervisors, coworkers or colleagues familiar with the nominee’s work and character.

What type of information should be included about the nominee? Potential information to submit about the nominee can include (but is not exclusive to): projects or initiatives the individual is or has been involved in; results from past projects; day-to-day job responsibilities; workplace initiatives outside of regular job duties; and community involvement. The profiles written on the winners will be based on this information, so please be specific!

What do winners get? All nominees that are selected for Crane & Hoist Canada‘s Top 10 Under 40 program will receive a framed certificate recognizing their achievement and will be featured in the November/December 2022 issue.

Photos. We also require at least two high resolution photos of the nominee. This can be as simple as snapping some interesting photos on your smartphone.

From crane operators and project managers to software developers and sales representatives, we’ve hit on almost every sector in the industry and ask you to join us as we celebrate this year’s winners.

Crane and Hoist Canada would like to thank everyone for their nominations and congratulates the 2019 winners. (Note: The competition was not held in 2020.)

Sheena came to the Crane Rental Association of Canada (CRAC) as the youngest director of the board in 2011. In early 2017, she became the youngest chair of the board and led the association through a variety of board administrative improvements. She implemented a series of accountability measures, processes and policies that continue to lead the association today. As chair, she took her role very seriously and saw the opportunity to take CRAC in a direction that would make every crane rental company in Canada proud to be a member and engage in the organization’s future direction.

Justin Andrews has demonstrated exceptional passion for improving safety and operating efficiency of mobile cranes operating in Canada. Since moving to Canada from Australia, and joining Tadano America Corporation in 2016, Justin has worked diligently to learn crane applications in the oil fields and constructions jobs throughout Canada. He has been instrumental in helping Tadano customize their rough-terrain and all-terrain cranes to perform both safely and efficiently. Specifically, Justin has been instrumental in helping Tadano develop cold weather packages to keep cranes running throughout the cold Canadian winters resulting in improved up-time on the job and lowered cost of ownership for Tadano customers.

Don’t let the short resume of Jose Perez fool you into thinking he doesn’t have much experience in the crane industry. His first full time job was at Broderson Manufacturing Corporation (BMC). As a parts runner, Jose would ride to work with his father who is also still working at BMC. Prior to his role as international regional manager, Jose worked both in the plant and then, in the office. This experience provides a complete understanding of the entire Broderson Manufacturing Corporation product line, and provides the foundation for his work.

Kris has an outstanding personality with the attitude to help everyone, no matter the task. He has been a part of the family business since 2010 while going to school, and started full time in May 2018 after university. Kris is a fundamental pillar of our company, he knows our business inside and out and he embraces every task which helps to expand his knowledge of the industry.

Kevin Hughes started with Falcon Equipment in July of 2014 as service manager at our Winnipeg branch. He brought a strong technical and customer focused background. During Kevin’s time as service manager his biggest accomplishment was creating a reputation for Falcon that was based around us being a one-stop-shop for all our customer’s needs. Once the Falcon name began to expand in the Winnipeg market, Kevin was promoted to branch manager. In that role, Kevin has built a strong team of mechanics and sales representatives. He has been responsible for bringing stability to the market and to his team of employees. Recently Kevin was promoted to prairie regional manager. In this role he continues to manage the Winnipeg branch, but now he is also responsible for the Regina branch in Sask.

Joel Gibson started with Falcon Equipment more than 4.5 years ago as a sales representative. In this position one of Joel’s biggest achievements was receiving the largest bucket truck order in Falcon history. It was clear that Joel was committed to not only the customer but also to the overall growth of the industry and company. This is when he transitioned into the role of sales manager — overseeing the Surrey Sales division. During his time as sales manager Joel had several achievements. Joel took the initiative to have market research done and to find out what product range we were missing. Based on Joel’s findings, in 2018 we introduced a line of service mechanic trucks to Falcon. Since 2018, this line has brought in close to $2 million in sales.

Wightman has been an integral part of WrightPlan’s success for the past seven years. As lead developer of the company’s web-based, business management application, he is dedicated to making the day-to-day lives of those working in the industrial market that much easier. With a keen understanding of customer pain-points and fierce attention to detail, Wightman is relentless in his pursuit of improving customer workflow. While he takes immense pride in his work, Wightman admits that his greatest accomplishments have taken place outside the job: he is an environmentally conscious individual (rain and snow won’t stop him from riding his bike to work), a proud father of three, and an accomplished Kung Fu Blue Belt (with hopes of one day being as good as his kids).

Cory was hired as an apprentice with Canadian Crane Rentals in 2013. He attended Durham college for his 339C ticket in 2015, earning top marks in his class. Cory went on to operate Canadian Crane Rentals boom trucks while earning his hours for his 339A apprenticeship. Cory attended Durham College in 2018 and graduated top of his class and earned the Deans award for top overall GPA in the college. Cory quickly transitioned from a boom truck operator to a 90 to 140-ton crane operator with ease. Cory is one of Canadian Crane Rentals’ most requested operators. He’s creative, ambitious, a team player and an extremely skillful operator. Over the last couple years, Cory has shown strength in mentorship with new apprentices along with precision with complex jobs and tandem lifts. Along with being an excellent operator, Cory is mechanically inclined and never hesitates to assist with any task required around our shop.

Dany has been with Grues MSG Canada Cranes since it began eight years ago and he is a sales representative for the company. Dany takes great care in helping a customer from the beginning of the sales pitch to the end of the deal and takes it beyond that in terms of customer service and care. He loves to see a happy client and will do whatever he can to see that customers at MSG Cranes are taken care of. He works in sales and rentals and spends a lot of his day finding new clients and customers. Dany loves the diversity in terms of his company’s customers and gets excited about all the different types of jobs and projects he sees his company’s products play a role in. He said no job is the same and he really enjoys how unique each job can be.

Kelsey first started as a crane operator instructor teaching several courses. Then shortly after that he started doing sales alongside the training. He visits customers, pitches projects, closes deals, finds new clients, and more. In the three years of being on sales the company’s overall sales volume has gone up 150 per cent. As general manager Kelsey oversees day-to-day running of the All-Canadian Training Institute (ACTI) and also sits on the American Society of Mechanical Engineers board. Kelsey enjoys getting to know his clients and the courses he teaches because he knows it’s important for workers to know how to protect themselves and follow the rules. Kelsey likes to show operators how to make better rigging and safety decisions.