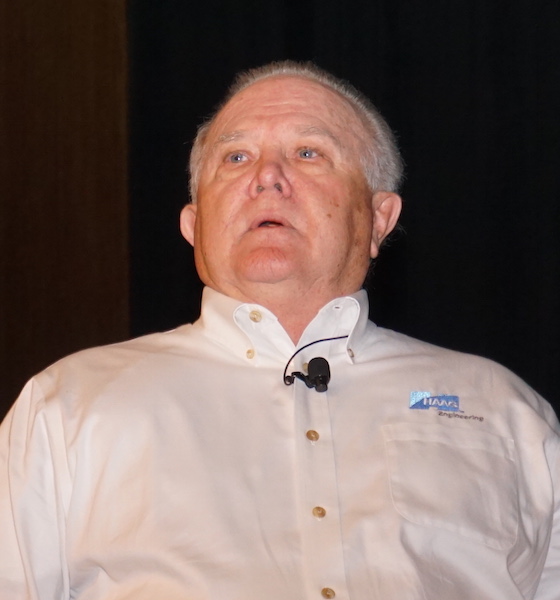 To no one’s surprise, given the slumping Alberta economy, attendance was down at this year’s annual conference of the Crane Rental Association of Canada.

Nevertheless, those interviewed at the annual conference, held June 1-4 at the Hyatt Regency Calgary, had nothing but praise for the event and its organizers.

“It’s a well-run conference,” said Milt Lindsay of Terrace, B.C., in a remark that summed up the sentiments of many conference attendees. “It’s a beautiful facility and extremely well organized.”

About 190 people, including spouses of CRAC members, attended the conference, said Claire Bélanger-Parker, CRAC’s executive administrator. That was down from the 235 attendees at the Montreal conference in 2015 and the 308 at the 2014 conference in Whistler, B.C.

“We expected it to be lower,” Bélanger-Parker said. “I mean the economy is what it is and it’s going to take us a few years before we bounce back. But at the end of the day, the content is certainly not neglected because we have lower attendance. We are giving the same 150 per cent.”

The highlight of this year’s conference was a tribute to Fort McMurray, Alta., whose 90,000 residents were just beginning to return home after evacuating the city after a massive wild fire in early May.

“We were in the middle of an executive meeting when it dawned on us that there was so many lessons to be learned from this experience that we wanted to make it a priority at the conference,” Belanger-Parker said.

“It really impacted everybody,” Brennan said. “I mean obviously all of us in Canada and the States and everywhere in the world is nightly talking about it. But when you see an actual video like that — they did a fabulous presentation — it really hit home. And I saw some tears.”

The keynote speeches were originally going to be delivered by Calgary Mayor Naheed Nenshi and Edmonton Mayor Don Iveson. However, they each cancelled their appearances several weeks before the conference.

“You know, things always happen for a reason as far as I’m concerned,” Bélanger-Parker said, adding, “When you look at what is happening around you and in our industry, Fort Mac was the priority number one that needed to be talked about.”

• Jeff Gaulin, vice-president of communications with the Canadian Association of Petroleum Producers, spoke about the need for new pipelines to move Alberta oil to international markets.

• Lindsay Amundsen, workforce development coordinator for Build Together, talked about efforts to encourage more women in the trades.

provided an update on his more than 30 years of research into nearly 1,000 crane accidents in North America.

• Tim Sittler, a senior consultant with Mammoet, gave an update on a boom dolly safety committee CRAC put together after the 2015 Montreal conference. The Calgary conference also heard from Tony Niese of Ohio-based Nelson Manufacturing, a manufacturer of boom dollies and other equipment, who devoted much of his presentation to boom dolly safety.

• Jeff Curran of Fleet Cost and Care Inc. discussed the use of mobile technology to improve productivity in construction businesses.

• And for the spouses, Mia Staysko of White Lotus Interiors discussed feng shui.

Like many conference attendees, Lindsay was most impressed by Wiethorn’s presentation.

“Having been in situations where there could have been a statistic it was quite informative to hear what he had to say and how he analyzed all of those situations and created a very clear picture of why things go wrong,” said Lindsay, who was president and owner of Raincoast Cranes & Equipment Ltd., which he sold to Alberta-based Entrec Corporation in 2012.

Fortunately, in the nearly 30 years he ran the company, he didn’t have any catastrophes. “I can remember early on in my career I didn’t use load softeners,” said Lindsay, who now owns a quick oil change outlet and commercial truck, car and dog wash — yes, a dog wash — in Terrace. “I should have, and learned very quickly after that. Fortunately I did not damage what I was lifting.”

Former CRAC chairman Pierre Desgagnés, who has missed only one CRAC conference since 2001, said that “the focus on the safety it’s a big issue in our industry.”

The general manager of Tessier Limitée of Baie-Comeau, Que., Desganés completed his final term on the CRAC board, although he remains president of Quebec Crane Owners Association. He also performed French translation duties at the Calgary conference.

And he captured the general spirit of the occasion when he said, “The weather is nice and the group is always so friendly and I’m very happy.”

It’s all about networking

Chris Power of Coast Crane Ltd. of Surrey, B.C., said the reduced attendance at the conference had a side benefit. “It gave you a better chance to network and talk with people longer,” Powers said.

He also liked the new CRAC app that available for the first time at the conference. It provided such features as maps, agendas, biographies, a delegates list, and alerts about departures for buses to various events.

The latter included the Jurassic Experience tour and the conference golf tournament both held in Drumheller about 135 kilometres northeast of Calgary. Other conference highlights were a 1980s-themed get-together at Calgary’s Heritage Park, and the closing banquet, which had a James Bond theme.

Bob Fairbank of TNT Crane & Rigging Canada Inc. of Abbotsford, B.C., said he enjoyed the “urban flair” of having the conference in downtown Calgary.

“I think for me for the conference is it’s all about meeting people,” said Fairbanks, who was attending his third CRAC conference. “So it’s the networking. You get to meet people you probably wouldn’t ever see for the next few years.”

“It’s always a first class deal with some first rate people,” said DeFosse, whose company is the Manitowoc, Grove and National Crane dealer for B.C. “I think the people here are really what makes this conference. It’s just a lot of good people.”

Jamie Harthoorn, associate marketing manager with Terex Cranes, said her networking at her fourth CRAC conference was a far cry from at her first where she hardly knew anyone.

“So it’s definitely different coming in and truly a networking opportunity now whereas before it was kind of getting my name out,” Harthoorn said. “But now I know some people and have developed some relationships.”

She was excited to learn that the conference would feature a presentation on Fort McMurray because it had been all over the news — around the world. Smoke from the fires had also reached Waverly, Iowa, where she based and which is about 2,500 kilometres southeast of Fort McMurray.

“The U.S. coverage has kind of stopped,” Harthoorn said. “So it was great to hear an update on it, how it truly affected the families of different crane companies here.”