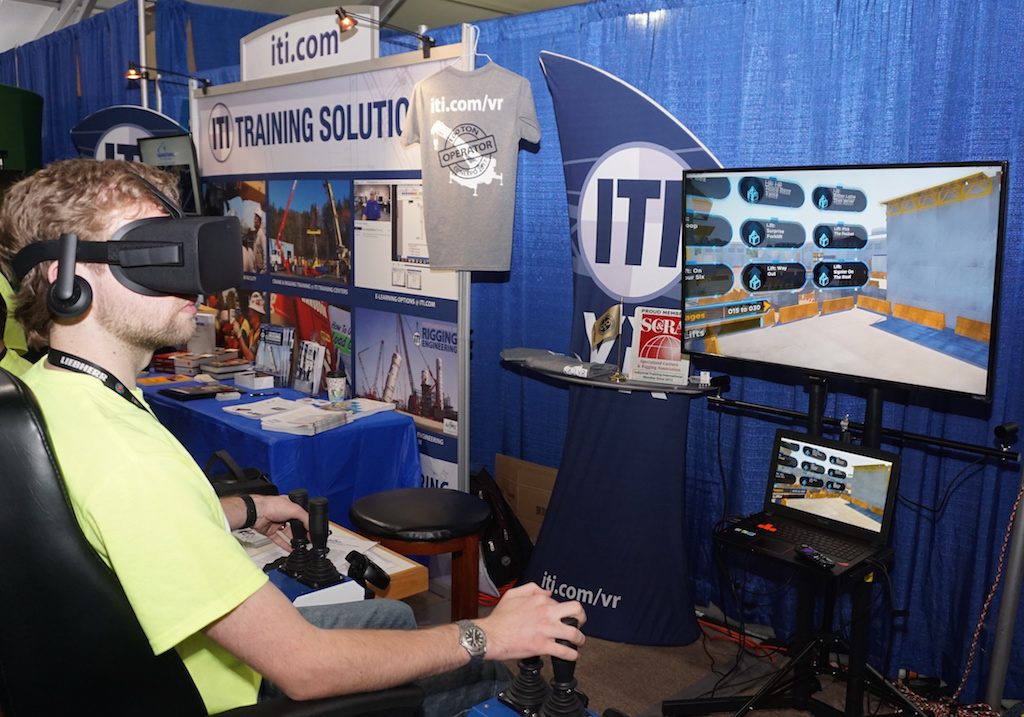 Attendees at the Crane Rental Association of Canada’s annual conference this June will be able to take a virtual busman’s holiday of sorts.

Montreal-based CM Labs Simulations will bring one of its Vortex simulators to the conference, which happens at the “luxurious and legendary” Algonquin Resort. Meanwhile, Industrial Training International, which has a training facility near Edmonton, will bring its virtual reality crane simulator to the conference.

Both systems were on display at the 2017 ConExpo-Con/Agg heavy equipment trade show in Las Vegas this March.

“I think with Algonquin being a small community we really wanted to have more interaction and more activities,” Bélanger-Parker said. “So the simulators are a great addition.”

The ITI system employs a sophisticated Oculus Rift headset and uses software from Edmonton-based Serious Labs Inc., explained Caleb Steinborn, product manager for ITI’s virtual reality crane simulator, during a demonstration of the equipment at ConExpo. The company officially released the system on March 6, the day before ConExpo opened.

Representatives from CM Labs and ITI will also be among the presenters at the conference. Drew Carruthers of CM Labs is scheduled speak at 10:15 a.m. on Saturday, June 10, while ITI’s Zack Parnell will make his presentation later that morning at 11:30.

A late addition to the program is a presentation by Patrick Lacroix, who is the New Brunswick manager of stakeholder relations for TransCanada Corp.’s proposed Energy East oil pipeline project. In that role, he is responsible for engaging and consulting with municipalities, non-government and environmental organizations, Indigenous communities, and landowners, says his TransCanada bio.

Lacroix’s 20 years of public affairs service also includes working in provincial and federal public service, with non-profits, and as a director of government relations for J.D. Irving Ltd.

Other speakers on the program include the following:

• Jim Quinn, president and CEO of the Saint John Port Authority, which welcomed two huge gantry cranes to the port last fall and recently announced a $205 upgrade to its western terminals;

• Jose Perez, export sales manager with Broderson Manufacturing Corp., which is headquartered in Lenexa, Kansas; and

With two months to go before the conference, 111 delegates had already registered for the event.

“We’re quite excited because at this time last year our numbers were not as high as they are this year,” Bélanger-Parker said. “So it gives us great hope to have a great turnout in St. Andrews.”

She attributes those high numbers in part to having opened registration earlier this year than in the past. Still, despite that, several current and former directors of the association still hadn’t signed up by the end of March.

The conference opens Wednesday, June 7, with a board of directors agenda that includes a directors’ breakfast and lunch, a board meeting, and a meeting of CRAC’s boom dolly committee. Pre-registration for the conference is also open that day from 9 a.m. to 9 p.m. And the Spreader Bar — in the resort’s Van Horne Ballroom, in a separate building of the main resort — convenes for the first of four evenings, starting at 8 p.m.

Thursday’s program includes the annual golf event, a guided Marine Experience tour of the Bay of Fundy, a visit to Kingsbrae Gardens, and a “Kitchen Party” get-together that evening in the Van Horne Ballroom.

The ballroom is also where attendees will be able to pick up a copy of this issue of Crane & Hoist Canada for some late-evening reading.

The conference’s charity of choice this year is the Dragonfly Centre for Autism in St. Andrews. Among the centre’s initiatives are “highly specialized music and art therapy summer camp programs, delivered by trained autism specialists, have enriched the lives of many students and families since their incorporation in 2005,” notes a posting on the conference website.