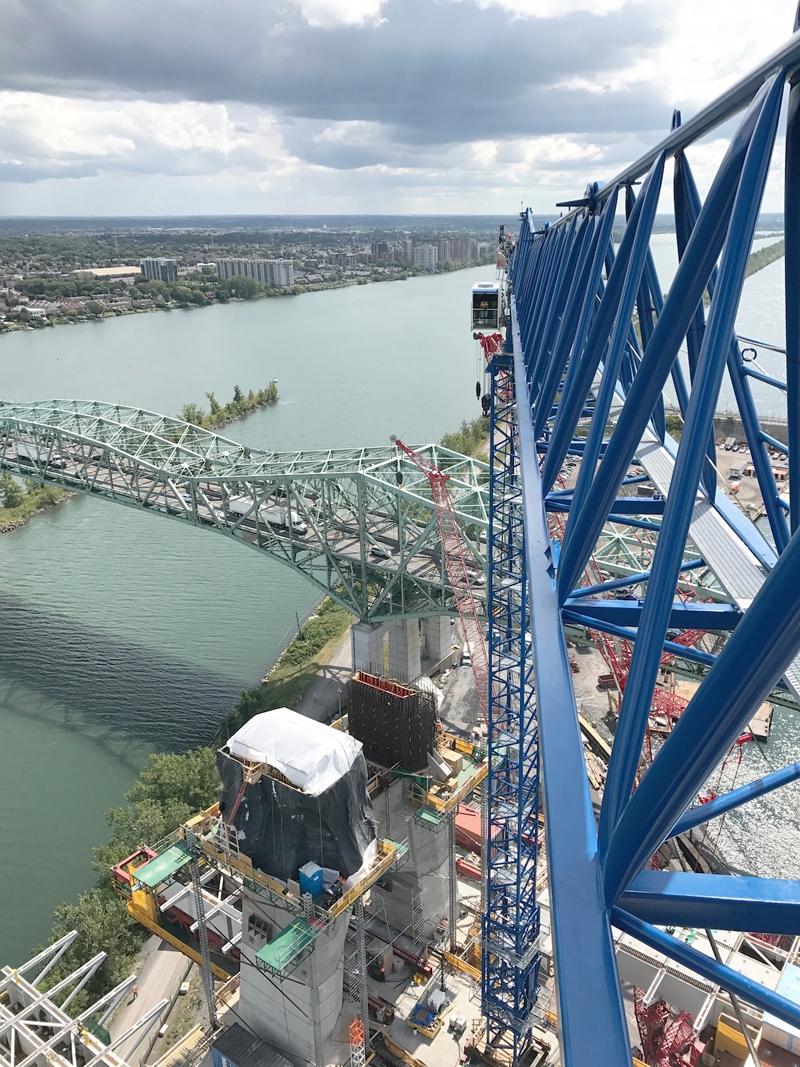 Cranes continue to flock to one of Canada’s biggest infrastructure projects. With a projected $4.239-billion cost, the 3.3-kilometre Champlain Bridge crosses the St. Lawrence Seaway has been attracting a steady who’s who of cranes.

The latest member of the team, a Linden Comansa 21LC550  tower crane, was acquired in September to help erect the main pylon. Working from the bridge’s new deck, the 21LC550 has a maximum load capacity of 25 tonnes.

Signature Sur Le Saint-Laurent Construction, the consortium holding the private-public partnership contract the federal government awarded for designing and building the bridge, has put it to work hoisting the main span pylon, which supports the stay cables, and servicing additional areas within its 50-metre reach.

Mariano Echávarri, a spokesperson with Linden Comansa, described the 21LC550 as a flat-top tower crane designed for heavy loads.

“We supply this model all over the world and it is quite popular in North America,” Echávarri said. “The 21LC550 has been used to build bridges, tall buildings, dams, large malls, industrial premises and more.”

Linden Comansa supplied the same crane for other Canadian projects, including the CHUM hospital in Montreal and the Keeyask dam in Manitoba.

The 21LC550 also comes with a lighter-weight 20 metric tonne load capacity but bridge proponents settled on 25 tonnes. They also opted for a 50 metre-long jib, rather than 80 metres, for reach, Echávarri said.

At the end of that 50-metre jib, the 21LC550 can load up to 10,600 kilos in standard mode and 11,600 kilos when using a system known as PowerLift. “This control system, which comes standard, is designed to be activated occasionally by the crane operator from the cab,” Echávarri said, explaining that load increases are achieved by reducing hoist and trolley speeds.

Echávarri said the 21LC550 is well suited for erecting the 170-metre-tall pylon and setting forms and precast components because it fits well in concentrated areas of construction. He added that the tower crane will be raised with a hydraulic jacking cage to reach a final height of 123 metres from the bridge deck.

“At such height it is much more efficient to use a tower crane since the operator has a bird’s eye view and excellent control of all lifts,” Echávarri said. “Using other types of cranes like really large mobile or crawler cranes doesn’t make sense in this project because all the manoeuvres would have more risks as they would be controlled from the ground.”

The standard hoist mechanism that comes with the 21LC550 allows speeds up to 166 metres per minute.

“Such high speeds are a key factor to ensure a great performance of the crane, especially when it reaches the final height of 123 metres from the deck of the bridge (180 metres from the base of the pylon),” Echávarri said.

Echávarri pointed out that other potential alternatives such as large mobile or crawler cranes would need to be controlled from the ground and require considerable time to set up. Their working speed is relatively slow and their cost for purchase or rent tends to be high, he added.

Echávarri declined to reveal a price tag for the 21LC550 but confirmed the crane was sold to the bridge’s builders through Linden Comansa’s North American office.

Véronique Richard-Charrier, a spokesperson for Signature Sur Le Saint-Laurent Construction, said the 21LC550 was chosen specifically for erecting the pylon. The pylon, which will serve as the main support for the cable-stay bridge, is itself a key feature of the bridge. The pylon’s cables extend harp-like, parallel to each other, so the bridge can span over-top the shipping lanes.

“The pylon is being constructed using a jump form or self climbing formwork system and in-situ concrete,” Richard-Charrier said. “Tower cranes are ideal for this type of vertical construction, providing a very efficient lifting capacity to logistically support the advancing work face.”

The 21LC550 will work from the bridge deck and has the capacity to be extended vertically as the pylon progresses. “The increased height will require that the crane mast is connected to the pylon at intervals to give it additional stability,” Richard-Charrier said.

As usually is the case with tower cranes, weather is a consideration. It can’t be operated when winds exceed 50 kilometres per hour. The tower crane’s 123-metre height atop the deck also required cooperation with St. Hubert Airport Authority to ensure aircraft landing there remain unobstructed.

“The height of the pylon itself is also constrained by aircraft,” Richard-Charrier said.

The new cable-stayed bridge replaces an existing one bearing the same name that opened in 1962 and has aged considerably in recent years. The older bridge has remained open in order to reduce traffic headaches.

The Champlain Bridge is one of Canada’s busiest bridges, with an average of 136,000 crossings daily, but road salt and other factors degraded it over time. Construction of the new cable-stayed span began in 2015.

Plans call for the bridge to be opened to traffic in late 2018 and all ancillary work to be completed by October 2019. As for the 21LC550, Richard-Charrier said it will be sold when its work is completed.