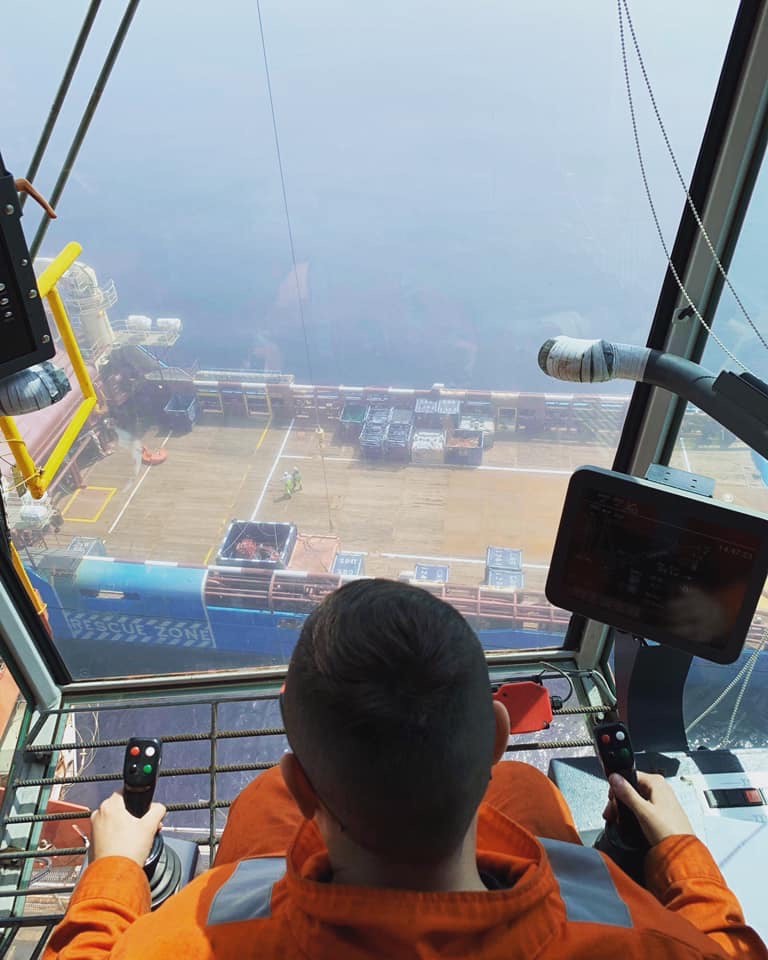 A view over Denika’s shoulder as she performs lifts at the West Aquarius oil rig.

This article was first printed in 2020 and featured on www.women-in-construction.ca. Join the conversation, access news, features, and more content focused on celebrating women in construction.

Denika Mitchelmore says she was always a private person, who suffered from social anxiety and struggled in school. But a love and fascination with cranes gave her life focus and now the native of Green Island Cove, N.L., is the first female level 3 offshore crane operator in Atlantic Canada. But that accomplishment, earned while working at the West Aquarius oil rig, doesn’t compare to the simple joy of working with the machines that she’s become so obsessed with.

“I’m from a very judgmental place,” says Mitchelmore. “If you don’t have book smarts and you aren’t a certain way, you aren’t fitting in. So obviously, I didn’t fit in. I felt so sad my whole life. Skill trades were never really talked about in school, it was always university, university, university. So I thought my life was going nowhere–that I would be in a grocery store for the rest of my life. There was no mention of skill trades, just courses that I couldn’t understand and being told that I won’t have a future, that I’ll never be anything. The amount of times I heard that in my life, I can’t count on my hands.”

A surprise encounter; however, changed the course of Mitchelmore’s life. At 17 years old, she came across a mobile crane off the side of the road. She watched the operator perform lifts and adjustments for quite a while before, to her surprise, he waved her over. 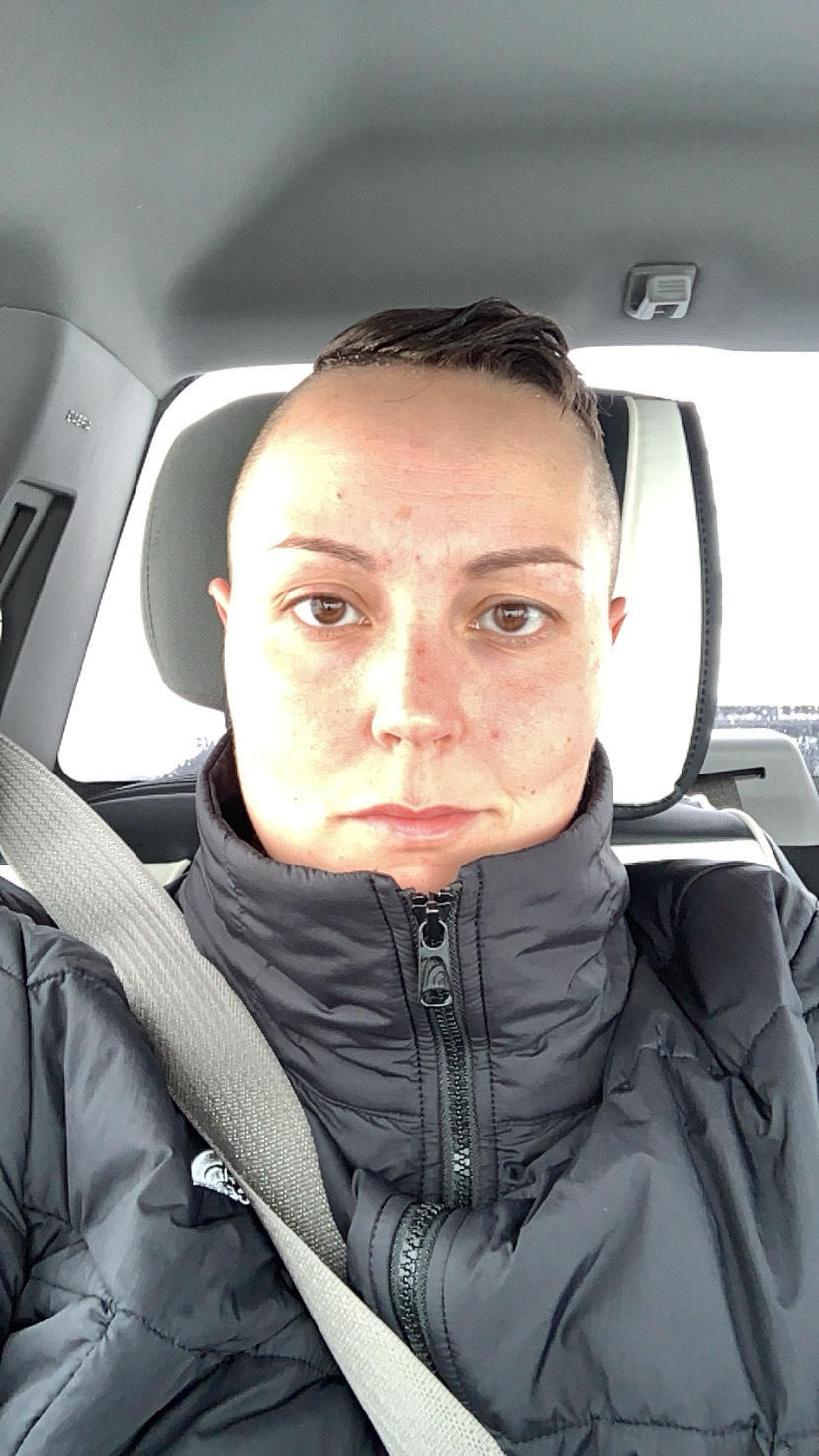 At age 17, Denika Mitchelmore became obsessed with cranes. She has turned that obsession into a career.

“He was an older gentleman, and he was so encouraging and supportive,” says Mitchelmore. “He told me that he never went to school for the crane job, he just got grandfathered in. It gave me a lot of encouragement. I wasn’t good at learning, I wasn’t book smart at all. But if you gave me something to do with my hands, I could do it no problem.”

While Mitchelmore remembers the details of the crane she saw that day–a 62-inch truck-mounted Terex–one of her great regrets is not making a note of the gentleman’s name.

“I’ve always been trying to find him, but I can’t remember his name for the life of me. I don’t know where he was from. And he never asked my name or anything, he didn’t care that I was a girl, he just told me his story and we went from there.”

From that point on, Mitchelmore became obsessed with cranes. She began to subscribe to crane and construction magazines. “I thought my mother was going to lose her mind, she didn’t know what to do with them all.”

Challenges along the way

Mitchelmore spent several years working her way up through the ranks on projects both on the island and out west. Moving up a ticket level; however, requires hundreds of hours with a mentor, which could be very hard to come by. In her experience, Mitchelmore says that many people would see someone who was young and eager to learn and immediately assume ‘this person is coming for my job’ and would be reluctant to train what could be their own replacement. As such those who did support her, such as Francis Tobin, who she met at the Muskrat Falls Hydroelectric project, made a significant impact.

“He was the first journeyman who said, ‘let’s go over stuff, I’ll help you.’ I learned a lot from him. He took me under his wing and he didn’t care that I was so eager–it made him excited. And along the process, he learned stuff just from me asking questions. It was fun.”

After spending the better part of eight years out west, Mitchelmore landed a job with the West Aquarius oil rig, where she received more support from important mentors, such as Luke Jarvis, the offshore installation manager and Steve D’Entremont, the operator who mentored her through her stage 3 training. In November of 2019, she became the first female operator in Atlantic Canada to earn stage 3 offshore qualification which allows her to perform all inboard and outboard lifts, including personnel transfers.

“It’s almost like it’s not even real,” says Mitchelmore. “I try to be as humble as possible. If I’m bragging about something, you don’t know if someone else is struggling, you know? I might be talking about I did this and I did that, and then there’s some poor soul alongside me that’s not been given the same opportunities and maybe they can’t afford to pay for their training.”

While she is humbled by earning that ticket, she downplays being the first female operator in the Atlantic Provinces to do so.

A love for cranes

While many would be content to rest on that laurel and stay in the seat of the Liebherr BOS 4200-80 at the oil rig as long as they could, Mitchelmore’s love of the cranes themselves drives her to seek her next opportunity and her next challenge.

“I would love to opportunity to get back on land cranes because there’s still a lot of different cranes that I want to try. When you’re offshore, you’re limited to just the pedestal cranes. There’s no different cranes coming in. So it doesn’t feel like a challenge, it’s the same thing every day. It’s great, and I’ve had a lot of great opportunities, but it’s not the same as being on land and having the opportunity to learn different types of cranes. I want to feel like I’m actually doing something with the trade. It’s about more than the money for me, I enjoy the machines. I enjoy the equipment.”

In addition to the support of mentors such as Tobin, Jarvis and D’Entremont, Mitchelmore is quick to credit the rest of the support system that helped her as she worked her way up–her parents and her partner, Stephanie. She also wanted to give special credit to her role model, her cousin Tina. 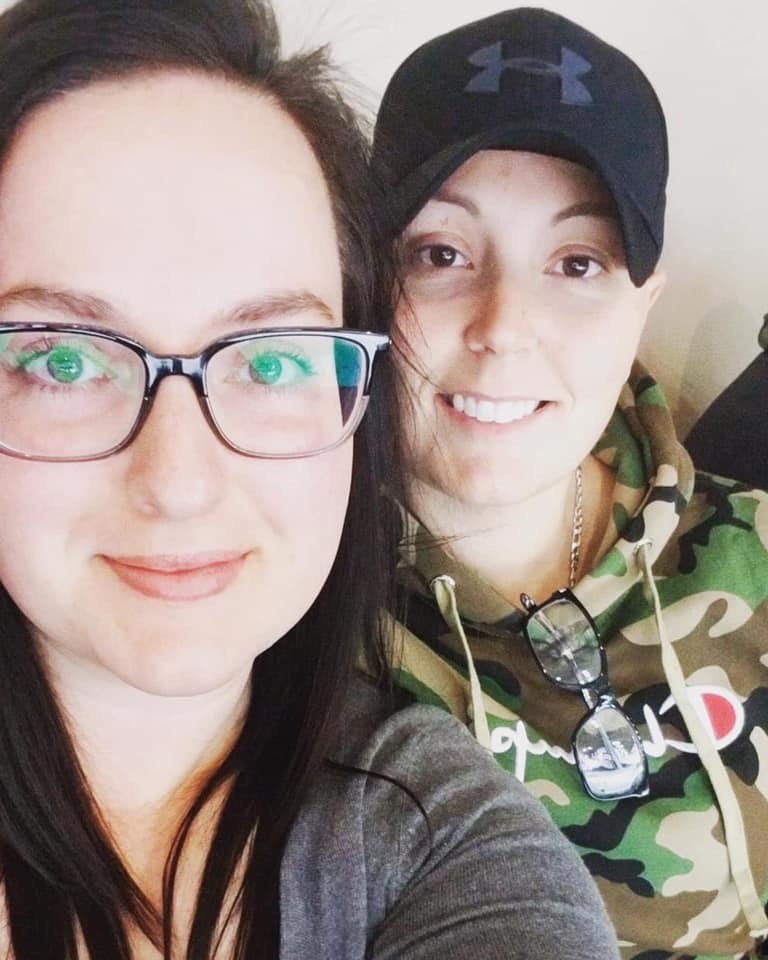 Mitchelmore is quick to credit her partner, Stephanie, for being supportive as she worked her way up through the ranks.

“She’s the strongest woman I know. She’s been there for me every step of the way. She was hard on me, but it was tough love. She knew I needed that and that I needed that push to go for cranes. If it wasn’t for her, I probably wouldn’t have taken the chance because I was so timid. She made sure that I was going to be okay. What if I fail? It’s okay to fail, just try and try again. I owe her a lot.”

Did you miss or forget to register for our Women In Construction Virtual Event? All of the sessions and keynote presentation are available On Demand here: rocktoroad.com/virtual-events/women-in-construction