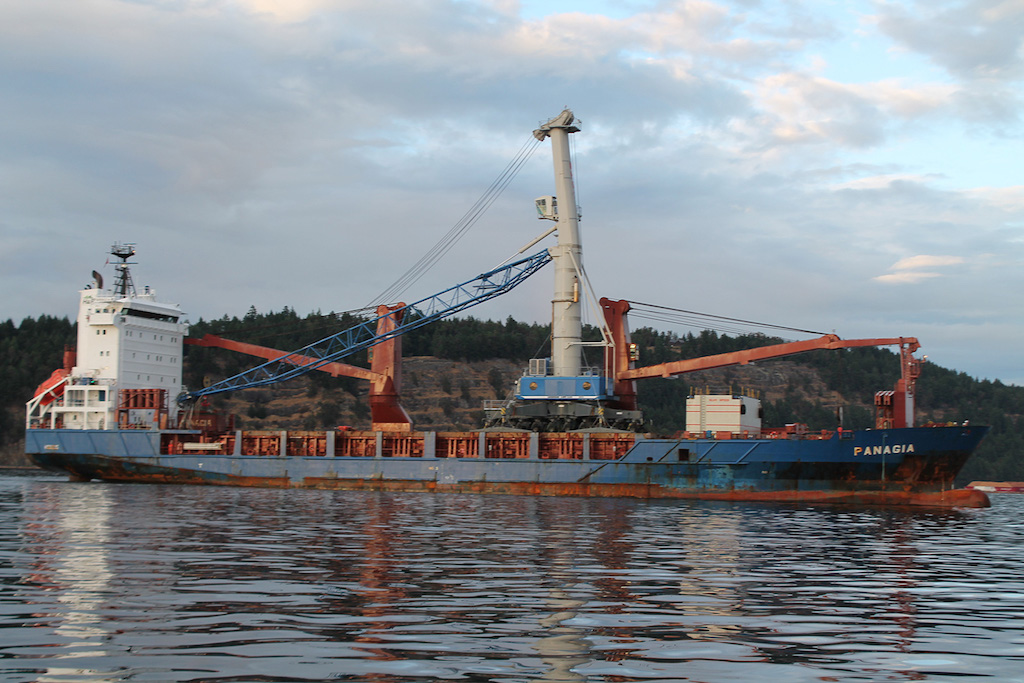 A 104-tonne capacity container crane is expected to go into service at the Port of Nanaimo’s deep-sea terminal at Duke Point by early March.

The used 2008 Liebherr LHM 500S 104-tonne capacity shore crane — which arrived at the B.C. terminal last summer from Brazil — is expected will be able to service post-Panamax ships of any cargo type, and reduce congestion and delays, said Bernie Dumas, the CEO of the Nanaimo Port Authority.

“And this is perfect timing given the significant growth in our cargo volumes for 2015,” he added.

The crane will replace an aging 40-tonne Canadian-made Canron container crane, which the port had acquired for $1 in the 1980s. The Canron will be retired eventually. It remain in service for about six months until the dock’s workers become comfortable with the new machine “because we want to make the transition smooth,” Dumas said.

International Longshore Workers Union crane operators are receiving training at the B.C. Maritime Association’s new training facility on Mitchell Island in the Fraser River near the heart of Greater Vancouver. The technologies on the Liebherr, such as joysticks, are similar to the controls on the gantry cranes at Port Metro Vancouver, Dumas said.

“So the learning curve is more just the reach and being comfortable in it. We’re just doing retraining,” he said.

The cost of the crane was around $4 million. However, it was only part of a larger $9.3 million project that included a new berth at the terminal, a new security gate, fencing, and lighting. Part of the money was also earmarked for upgrades to the port authority’s Assembly Wharf in downtown Nanaimo.

Rob Ashton, Canadian vice-president of the ILWU, said the union’s Vancouver Island local 508 as well as local 514, which represents foremen across B.C., will be doing the work.

“This crane brings local 508 and local 514 as well as (terminal operator) DP World a whole brand new world of cargo to move,” Ashton said. “It’s really exciting and we’re proud to be a part of it.”

Aside from handling containers, the new crane will load and unload breakbulk cargo at the dock. That includes pipes and modules for liquified natural gas projects proposed for the Island — should those projects go ahead.

“It’s newer, it’s mobile and has lots of flexibility to it and it’s multipurpose,” Dumas said. “So it’s going to be a good asset for the port and for many years into the future and it gives us opportunities we didn’t have before.”

Dumas also expects the mere presence of the crane to attract more project cargo to the port.

Container volumes at the port were up 39 per cent in 2015 compared to the previous year, the port said in a Jan. 28 news release.

Cargo handled at the port totalled 4.85 million tonnes in 2014 with exports increasing 23 per cent over 2014 and imports rising 12 per cent.