Features
Ready to take on the biggest 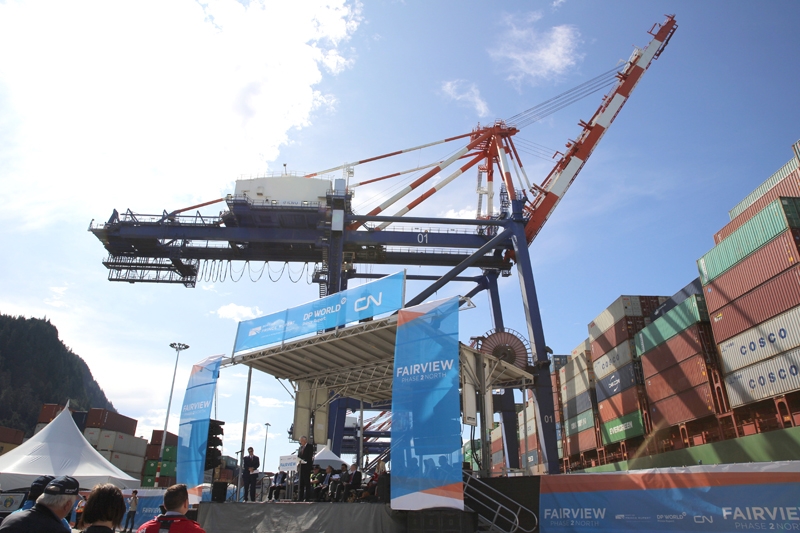 The Port of Prince Rupert is ready to service the largest vessels in the ocean.

The port’s ability to now service 20,000-plus TEU vessels is thanks to DP World’s completion of its Phase 2 North expansion project that allowed for a significant increase in container throughput at Prince Rupert’s Fairview Container terminal.

The project started shortly after DP World purchased the Fairview Container Terminal in August 2015 and was completed a little over two years later this past August.

At the time the expansion began, the terminal had a capacity of 850,000 TEUs, one vessel berth of 360 metres, and its cranes had a reach of 22 containers wide to service 13,000 TEU vessles. Now, the terminal features a second vessel berth for a total length of 800 metres and has increased its capacity to 1.35 million TEU annually.

“The new Malaccamax cranes dock gantry cranes are about 40 feet taller and have a reach of 25 containers wide,” explains Brian Friesen, director of trade development for the Port of Prince Rupert. “They have the ability to work a 20,000 TEU vessel, the widest reaching vessels worldwide… we needed to add the second berth to increase traffic, and we needed the big cranes to accommodate larger vessels.”

“The expanded container terminal is an economic engine for the city of Prince Rupert and is directly responsible for hundreds of jobs with many others in the local community and beyond benefitting from its operations,” stated DP World Group Chairman and CEO, Sultan Ahmed Bin Sulayem. “We are delighted to mark this occasion today which signals our commitment to Canada and the local community. This is all part of our plans to provide capacity to meet Canada’s Pacific container terminal capacity requirements for decades to come in a cost-effective and environmentally responsible manner.”

“Prince Rupert’s success has been driven by its unparalleled geographical position on the Trans-Pacific trade route, high terminal productivity and consistent low dwell times that have been sustained alongside our significant growth in throughput over the past two years,” added DP World Canada Inc. general manager Maksim Mihic. “Strong relationships with our partners ILWU, the Prince Rupert Port Authority and CN Rail have resulted in a reliable and competitive service for our customers.”

Breaking bulk
The Fairview Terminal has been operating as a container terminal for 10 years (it celebrated its anniversary milestone on October 31). The facility used to be a break bulk terminal, but management noticed an upward trend in containerization in North America and converted the facility in 2007.

“It’s unique since there’s no local market,” Friesen explains, adding that the majority of the imported cargo is moved via CN Railway to major trading hubs such as Toronto, Montreal, Chicago, Ill. and Memphis, Tenn. “CN Railway is a major partner in all of this. It’s really an opportunity to diversify the cargoes moving in and out of Prince Rupert. There’s a lot of growth in containerized trade in North America and we saw we would have some advantages – closest port to Asia, lots of deep water, protected natural harbour, link with CN across Canada and into the U.S.”

The port imports a wide variety of products from overseas from auto parts to retail goods, consumer goods, electronics and more.

“We do the whole gambit,” Friesen says.

The Port of Prince Rupert also has a healthy export market although it is nowhere near as diversified. The export side of the port’s business is mainly comprised of forest products and agricultural products.

With the added shipping and storage capacities, the investment by DP World is expected to generate upwards of another 200 jobs, which will add to the 800 direct jobs Prince Rupert’s largest employer already supports.

“It has been a very successful endeavour,” Friesen says. “We’re looking forward to another 10 years of continued success.”