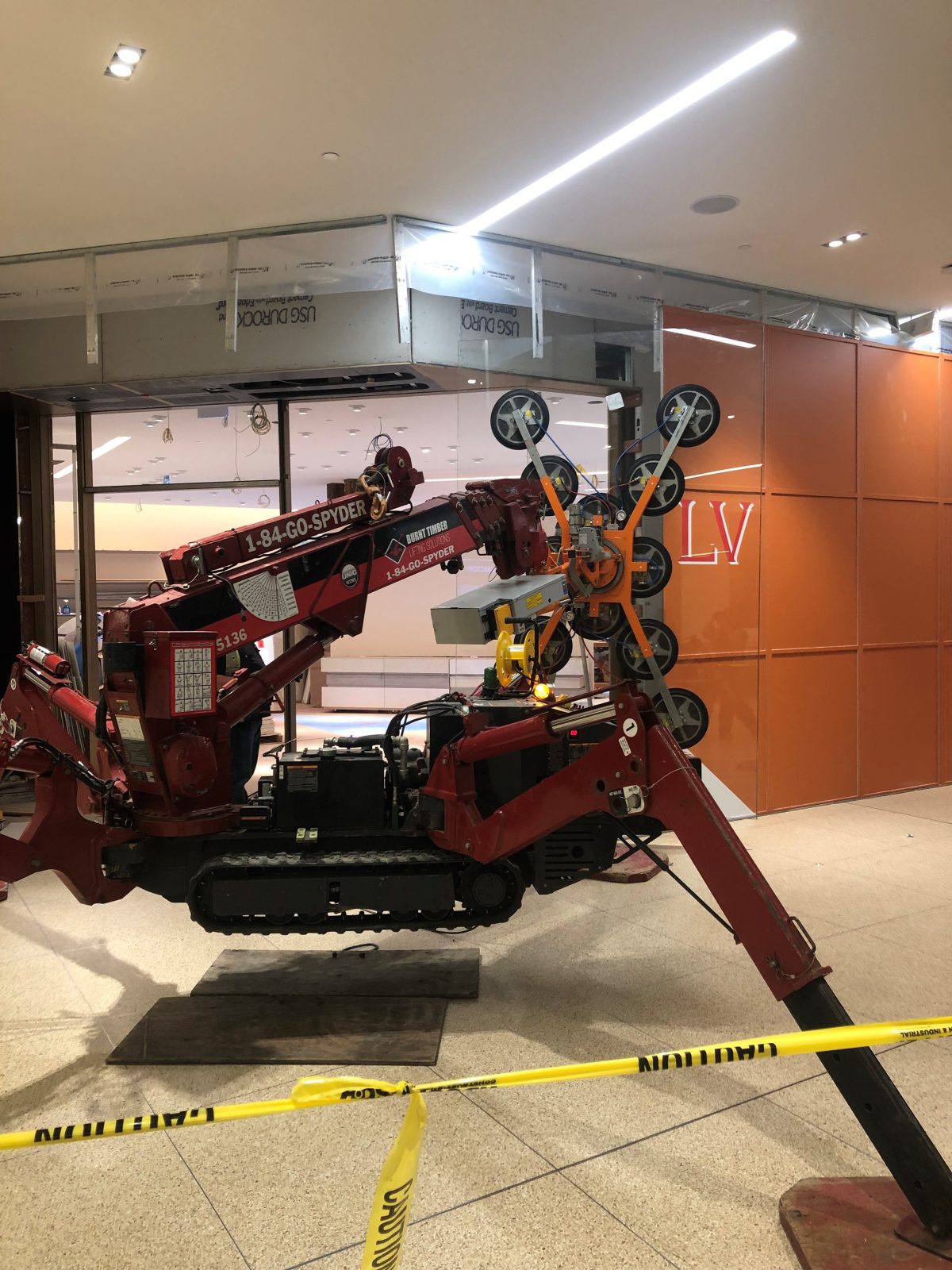 When a new store moves inside a shopping mall, or an existing one gets renovated, those projects sometimes come with unique challenges. In the cases of the CF Chinook Mall in Calgary and the West Edmonton Mall in Edmonton, those challenges came in the form of massive pieces of glass that needed to be installed for new Louis Vuitton and Canada Goose locations.

There are not a lot of companies that specialize in these sorts of installations in Alberta, but fortunately for the storeowners, Calgary-based Griffin Glass is one of them.

“We have a young office at Griffin. We’re highly motivated and nothing really scares us, we’ll try anything,” says Trevor Whyte, vice-president of Griffin Glass. “If it has to do with glass, we’ll make it work.”

Griffin Glass has been serving the Calgary area since 1960, providing a full range of glass and architectural metals for industrial, institutional and commercial construction projects. Like many companies in Alberta that are battling the province’s struggling economy, Griffin Glass started looking around a few years ago for new avenues for bringing in revenue. And a few years ago, they found one in sourcing massive pieces of glass and installing them for shopping mall storefronts.

“We’ve always been a curtain wall type of company, but with the way the economy is, you’ve got to look at these little niches that you can get a part of, and supplement your income when the times are down. It’s kind of a new thing for us,” Whyte says, adding that his company’s first installation was for the Louis Vuitton location in the CF Chinook Mall. “One of our previous estimators knew the company that had this job, and he was a really outspoken go-getter. He researched all this, got pricing… he got us the Chinook Louis Vuitton. And then after the way that went, we just kept it going.”

After performing the successful installation at the Chinook location, Griffin Glass was asked to source the glass for a Canada Goose that uses special freezer frames for their furs. The first two installations that Griffin Glass took didn’t present major challenges during the installations, but the next Louis Vuitton location was another story.

The second Louis Vuitton was located on the second floor of the West Edmonton Mall with minimal access points into that section of the mall. For this installation, the use of a Spydercrane was vital for the success of the project.

“They just have monster pieces of glass and it’s up on the second floor so we have to wheel these pieces into one of those mall openings. Then we have to set up our crane on the second floor, and kind of hoist it through the opening up onto a different platform – a different rolling A frame – and then, through the opening, we crane it in with these monster suckers (suction cups). I think these things were about 1,500 pounds apiece. These things are huge.”

The reason the CF Chinook Mall installation wasn’t as big of a challenge was because the store is located on the first floor. The Spydercrane’s lifting capacity and small footprint made it a perfect choice for the West Edmonton Mall project.

“These cranes are really cool,” Whyte says. “They’re on a track system and they can go through a standard three-foot by seven-foot door. I’ve never seen anything like this, and now just because we can do this kind of stuff, it’s opening us up to a ton more business with these guys. We’re almost exclusive to these guys now. Most glazing companies won’t even touch this – it is scary. It’s pretty lucrative if you can do it correctly, but if you have anything go wrong, you’re going to be in trouble. Knock on wood, we haven’t had any problems yet. We’ve been asked to quote jobs in Vancouver now and Saskatchewan, just because we’re so efficient at how we do things now.”

For the Spydercrane, Griffin Glass turned to Burnt Timber Lifting Solutions based in Athabasca, Alta.

“They’re pretty awesome. They provide us with an operator for the machinery so we basically just have to manhandle the stuff. They’re amazing at what they do,” Whyte says.

To err on the side of caution, Whyte sent up a crew of five people for the installation of the glass in the West Edmonton Mall.

“For this one storefront there were 10 pieces of glass and I think just my cost on the glass was about $40,000,” Whyte says. “I’d rather send one extra guy in case something goes wrong than pay for a broken piece.”

The glass is so large that Griffin Glass can’t create it itself, they need to source it out of another shop in Ontario.

He says the planning and logistics for projects like this tends to pose the greatest challenges. Whyte drove up to Edmonton with his foreman to plan out the staging area and the protection for the glass, and how they would get the massive pieces into the mall.

“The West Edmonton Mall was built in the ‘80s, so they have one place we could bring it in on the main floor,” he explains, adding that he had meetings with the manager and engineer of the mall to plan out the best course of action. “We had to walk this thing halfway across the mall… it took us a good day just to figure out how it was going to work. Once you get those logistical things figured out, before you go down there [for the installation], it goes off without a hitch.”

These types of installations typically take four nights to complete.

“We have to do it afterhours,” Whyte says. “We usually start work at 10 p.m. and work until eight or nine in the morning when the mall re-opens.”

Thanks to Griffin Glass’ new niche, the company has been able to expand its customer base.

“Before we were just locally based, we would venture an hour out of Calgary at the most, but this has opened us to the Edmonton area,” Whyte says.

Another added bonus is that Whyte can now see some of his company’s latest projects whenever he decides to go shopping.

“It’s really cool to walk around the mall, once the store is opened, to walk around and take pictures,” he says. “You’re really proud of the project. You wish you could explain to them how it was done and how it came to fruition.”