A giant in the world of cranes is helping construct the base of a fixed drilling platform that will be used for oil extraction 350 kilometres off the Newfoundland coastline.

The team working on Husky Energy’s West White Rose Project in Argentia has landed an SK350 super heavy-lift crane. Designed, manufactured and supplied by UK-based ALE Heavy Lift, the SK350 is one of the largest capacity land-based cranes in the world. With a 125-metre boom and 95-metre jib, it can hoist up to 5,000 tonnes and, as configured for this particular job, has a 220-metre picking radius.

Working from a level gravel bed at the project site on an old U.S. military base, the SK350 will place components, including structural steel, platform sections, stairways, rebar and concrete lids, into the centre of the concrete gravity structure, which will be the base of the fixed West White Rose Platform.

While the SK350 is rated up to 5,000 tonnes depending on its configuration on any particular project, the crane was retained for West White Rose not for sheer muscle power but for reach.

“The concrete gravity structure is 144 metres high, so they wouldn’t have been able to get access with any other crane,” said ALE project manager Frank Konig. “Our crane is located farther away [from the structure], but with a long reach and the additional jib on the crane we can pick up a [heavy] load and then slew it around and place it.” 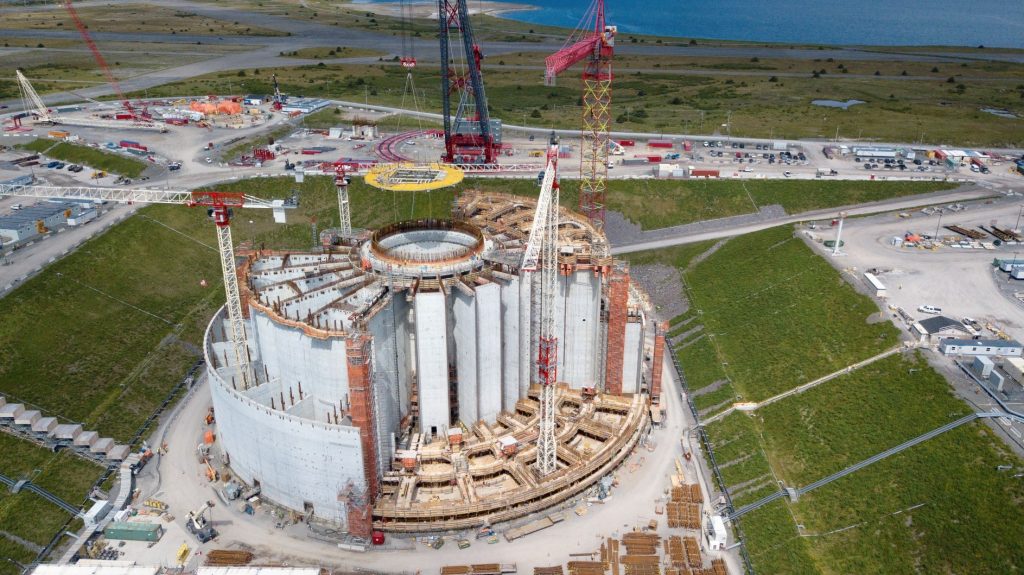 UK-based ALE Heavy Lift, the SK350, is helping construct the base of a fixed drilling platform that will be used for oil extraction 350 kilometres off the Newfoundland coastline. Photo by Husky Energy 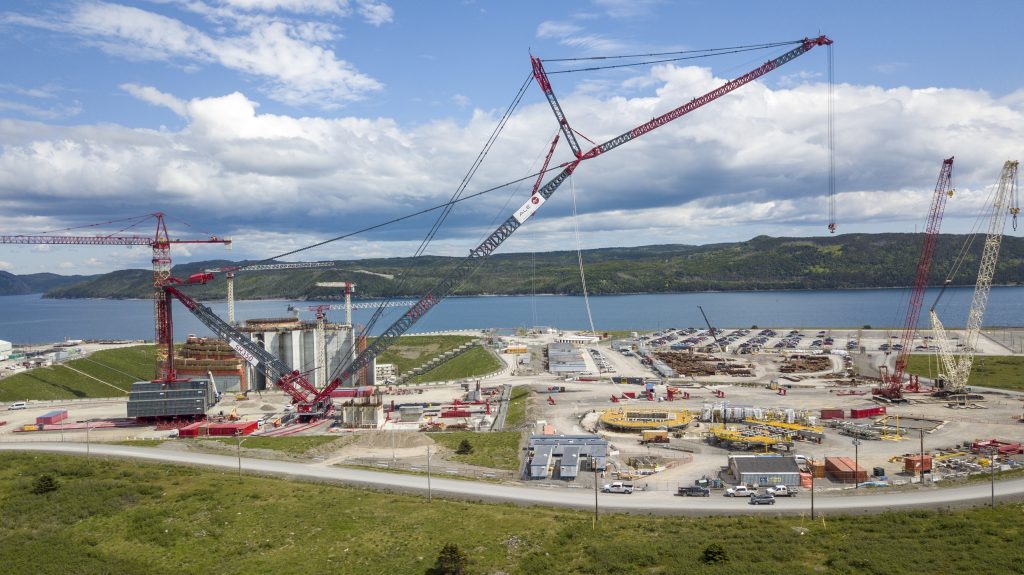 Designed, manufactured and supplied by UK-based ALE Heavy Lift, the SK350 is one of the largest capacity land-based cranes in the world. Photo by Husky Energy

The heaviest loads for the project include a 219-tonne interior deck and 250-tonne pre-cast lid sections, and the crane’s reach enables components to be placed inside the structure fully constructed.

“Without the crane’s dexterity, crews would have had to install components such as stairways and platforms in small modules, building them up piece by piece instead of installing them as one fully assembled structure, from ground level,” Konig said. “With the SK350 they can do all the fabrication and pre-commissioning of the equipment and don’t need to take anything apart.”

One deck piece measuring 23 metres in diameter and weighing 174 tonnes was placed using a straight forward four-point lift. “From hook-on to hook-off it took ten hours,” Konig said, describing a push-pull jacking system on skid tracks where the main challenge was ensuring the slewing radius was clear to keep crew members safe.

One major consideration is extreme weather. “The crane can actually take very high wind forces, so that’s really not an issue for this crane,” Konig said, describing its A-frame design and structural steel make-up as resilient.

Transport and assembly also proved challenging. Shipped from the Netherlands, the SK350 arrived in 200 40-foot containers and needed four cranes to piece it together. A 90-tonne mobile crane helped assemble three larger crawlers – 300, 440 and 600 tonnes – and those cranes worked on the SK350 in stages with help from telehandlers, reach stackers and boom lifts.

When the job concludes, the process will be reversed for disassembly and the SK350 will be shipped to its next destination, currently unknown.

The concrete gravity-supported structure forms the base of the fixed drilling platform and will soon be towed offshore and settled onto the seafloor at the White Rose field. Topsides and living quarters manufactured elsewhere will be added, and the drilling platform will eventually go into operation, sending hydrocarbons to the SeaRose FPSO, a floating production, storage and offloading vessel, for production.

The projected cost of the West White Rose Project is approximately $3.2 billion. Husky spokesperson Colleen McConnell said the company expects the platform will provide roughly 250 full-time jobs, with first production slated for 2022 and a gross peak production of about 75,000 barrels daily by 2025.

The SK350, built in 2013, stands almost alone. There’s only one other like it in ALE’s fleet – and the world, according to Konig. That second SK350 has recently been in Ingleside, Texas lifting offshore platform modules, including one weighing 2,884 tonnes. ALE has billed this as among North America’s heaviest lifts using a land-based crane.

Despite two SK350s in its fleet, ALE is launching an even bigger version. The SK10000 doubles the SK350 in sheer strength, with a 10,000-tonne hoisting capacity. However, reach is a key factor in many projects, and users will often sacrifice capacity to give this crane its valued ability to manoeuvre large loads in challenging circumstances.