Features
Cranes do heavy lifting at Crowchild Bridge in Calgary 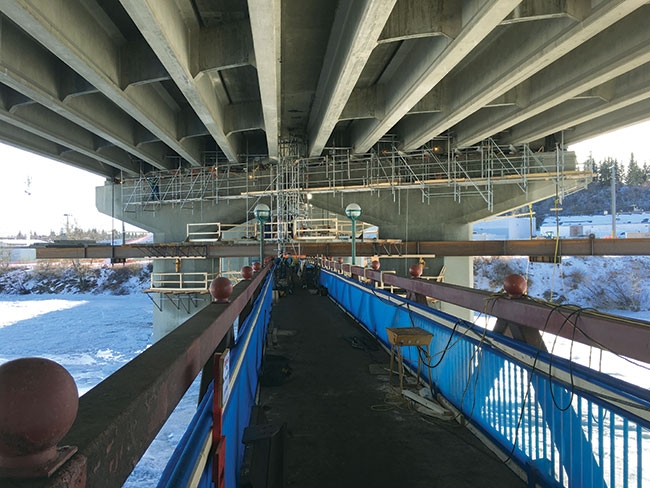 Cranes will be modest in size

Cranes will be modest in size, but hard working, when crews refurbish four bridges on Crowchild Trail, a major roadway in Calgary over the next two years.

The pier-and-girder bridges, all connected and flowing into one-another, cross the Bow River, two rail lines, smaller roadways and walking paths. But, built in the 1960s, they have weathered significantly.

“You can see the concrete starting to deteriorate and there’s some exposed rebar,” Jeff Baird, a senior City of Calgary transportation engineer who is managing the project, told Crane & Hoist Canada.

The bridges also needed expansion, given Calgary’s strong growth in recent decades. The project will see two lanes added, one in each direction, bringing the total to eight. “Calgary has outgrown not just the bridge but the whole stretch of road (Crowchild Trail) to which the bridge connects,” Baird said.

Most of the initial work will involve replacing damaged, worn-out concrete and other components. Crews will encase piers and foundations in concrete to extend their service life, expand hammerhead supports atop piers, replace weathered expansion joints as well as some bearing plates and systems used for girders supporting the deck, and rehabilitate bridge decks, with one deck getting a high-performance concrete running surface.

“We’re doing about 1,500 square metres of surface rehabilitation on the substructure alone,” Baird said, estimating this at roughly one-fifth of the overall bridge and pier surface area.

While there will be some overlap in activities, the widening component will follow, with steel dowels installed to provide reinforcement and help the new concrete bond to the old.

“That would be the unique part of the project,” Baird said. “Really, how the bridge is getting widened is putting in a lot of extra reinforcing steel. The dowels will be drilled in from work platforms underneath the bridge deck or from the ground supported by scissor-lifts or scaffolding.”

Crews will also relocate access ramps and install noise barriers along the roadway.

The considerable volume of work calls for a strong complement of heavy machines, including cranes. However, overall project demands add a layer of complexity that will directly impact cranes on the project.

To start with, crane sizes will be limited due to weight capacities imposed by existing bridge girders.

“All cranes used on the bridges during construction have had to be assessed for their impacts on the existing girder and deck systems,” Baird explained.

A variety of mobile cranes, supplied by Mammoet, will be on-hand. The largest-capacity include two 110-ton Liebherr LTM 1090 4.1 machines running in tandem on the bridge for demolishing the old girders and installing the new ones, and a 65-ton Liebherr LTM 1055 3.1 will assist with project falsework and help erect the temporary work platforms underneath the bridge.

As well, a 55-ton Liebherr LTM1055-3.2 will help with temporary formwork support, and an assortment of smaller cranes, from 30-ton machines down to picker trucks, will handle beams and other materials going underneath the bridge to support the temporary platforms.

Those temporary platforms are necessary from the get-go because working from berms directly in the Bow River is not permitted.

Graham, the project’s main contractor, was tasked with designing the platforms and their set-up underneath the bridge. The platforms need to be able to handle loads safely, and an existing pedestrian footbridge beneath the main bridge deck also needs protection even though it’s off-limits to the public for a portion of the project’s duration.

Working with consultants Allnorth, Graham verified the structural capacity of the existing girders and deck, and crews used the 65-ton Liebherr to position temporary steel girders, fabricated in pairs, to create working platforms for widening existing hammerheads that sit atop four piers in the river.

Martin Dobby, senior project manager with Graham, said the platforms were placed on hangers, suspended from the existing hammerhead, and then winched into position until the beams reached jacks, which were dowelled into the existing piers. Once the two sides were installed and spliced, the aluminum-beam platforms could then be installed.

Each lift for this project segment required careful engineering planning and approval.

“The outrigger positions are critical, and the path of the load has to be prescribed to ensure outrigger loads are not exceeded,” Dobby said. “The slinging arrangement and lifting-eye positions required specific attention, as the restriction of the existing edge beam meant the beams had to be eccentrically lifted.”

On the southernmost bridge, a box-girder construction, Graham is developing a rail and trolley system to improve production on the installation of the working platforms.

“This is necessary due to the number of road crossings and the LRT (one of two rail lines), where working windows are extremely limited,” Dobby said.

There are additional considerations. All lifts need to consider obstructions posed by bridge infrastructure and hydro wires as well as entities below the bridges such as the river, rail tracks, roadways and a pedestrian bridge that crosses the Bow directly underneath the traffic bridge.
Traffic will be a constant issue for crews. Because Crowchild Trail is a skeletal road carrying more than 100,000 vehicles daily, project planners opted to keep all lanes open from 5 a.m. to 9 p.m. Monday to Friday to avoid commuter chaos.

This is what ultimately necessitated the work platforms. While traffic is in full play during these peak hours, crews will work from underneath the structure. Then, at night and on weekends, when traffic volumes ease off, crews will put signs in place and close lanes as needed while construction continues.

The decision to allow traffic during critical hours will impact the use of cranes. Crews will need to position cranes carefully so as not to interfere with traffic, and most lifts performed from the bridge deck will be conducted during night shifts to minimize impacts to traffic.

“Each crane set-up on the bridge requires traffic management,” Dobby said. “The major lifts using the 110-tonne cranes can only take place once the traffic is shifted to [the other] side of the bridge, which can be achieved once the first side is widened.”

The $87 million projected price tag includes the various environmental and safety measures the project requires, in part due to the Bow River and other naturalized areas underneath.

The corridor study also proposed medium and long-term recommendations, so additional work could happen down the proverbial road. But the city’s Jeff Baird said the long-term plan to replace bridges and build new ones has yet to be funded and is still 30-plus years out.

Related
Upper Cambie Bridge replacement complete
It takes a Beast to build a bridge in Victoria
Hoisting in downtown Toronto? Advance planning is key
What is 3D lift planning?
Tags