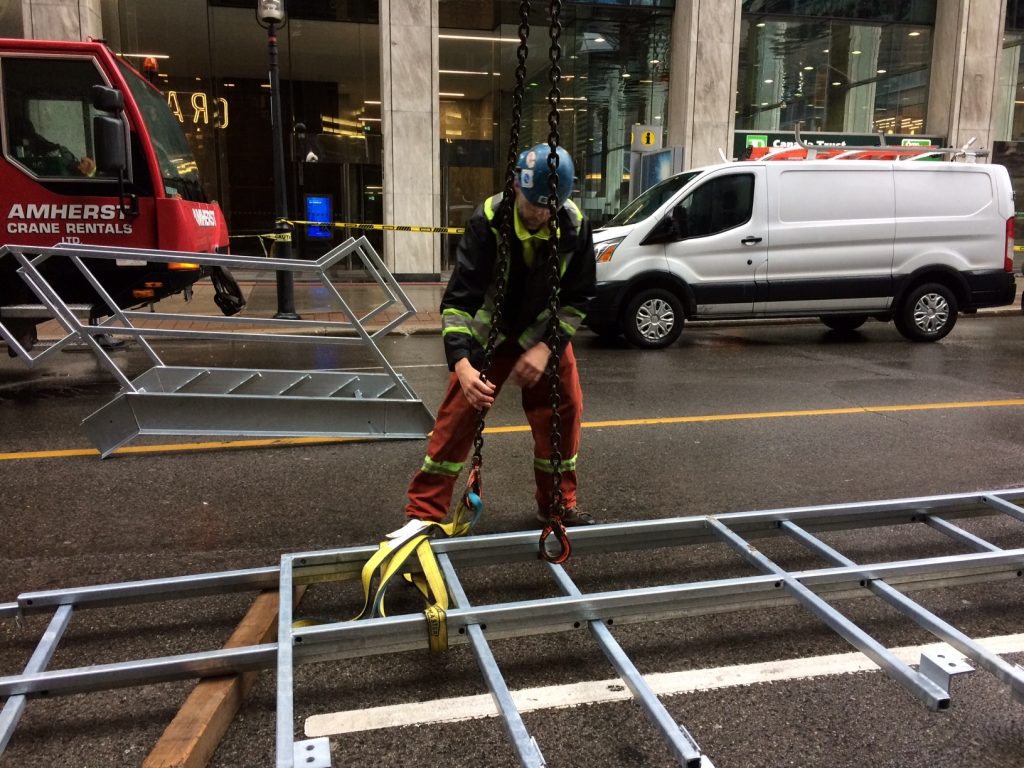 An Amherst Crane Rentals employee rigging a frame with a belt choker.

When it comes to hoisting HVAC and other heavy rooftop components onto downtown Toronto office towers, the lifts themselves take just a day or two. What makes it all work, however, is months of planning.

A case in point: In late May, Amherst Crane Rentals placed mechanical equipment atop a 22-storey building on Yonge Street, between Adelaide and Richmond streets, in the heart of downtown Toronto’s business core.

With a 15,000-lb. cooling tower the heaviest lift, and a relatively narrow area to work from, Amherst brought in one of its heavyweights — a 500-ton Liebherr LTM 1400 all-terrain crane.

“In this configuration we had 276 feet of luffer and around 220,000 pounds of counterweight with the [Liebherr TY guying] heavy-lift attachment,” Amherst Crane Rentals vice-president Mark Welstead explained.

Key to matching the LTM 1400 with this particular job was the fact the telescopic boom is attached and doesn’t need launching each time it’s needed.

“You have a great lifting capacity without having a major operation like launching a boom, so this speeds things up and makes the whole job more productive,” Welstead explained.

Because the LTM 1400 is versatile and can readily adapt to an eclectic mix of hoisting jobs, it isn’t sitting around if only smaller jobs come calling.

“Where it excels is in its capacities for all the work we do, whether it be for [erecting] tower cranes or for mechanical work like this,” Welstead said. “If we don’t have a 500-ton job for a few days we can rent it out as a 250, 300 or 400 with relatively ease. This gives us more productivity and use out of the crane. We can use it for smaller jobs very easily without a big cost.”

The truck-mounted crane’s compact nature makes it relatively easy to transport it from job to job. To travel to the Yonge Street site from its yard in the suburb of Brampton, Ont., the crane simply motored down major arterial routes, taking up a single lane, travelling at the city-approved 40 kilometre per hour speed limit and avoiding sensitive overpasses.

“The crane is permitted for the City of Toronto, but there’s lots of roads and bridges we’re not allowed to go over,” Welstead said, singling out the Gardiner Expressway, which for much of its length is an overpass that is aging and showing signs of deterioration.

To reach its downtown destination, the crane and its convoy of support trucks drove down Highway 427 and then took Lakeshore Blvd. eastwards. While the set-up and job itself were fairly straightforward, the project itself required months of logistical planning. As soon as its customer came calling, Amherst contacted City of Toronto work zone coordinators and affected parties such as the Toronto Transit Commission (TTC) to sort things out.

“It starts with the customer and what they require,” Welstead explained. “We figure out what kind of crane we need and how we’re going to do it, then we decide whether or not we need to shut a road down.”

Logistics are normally arranged months in advance. Transit routes can be affected, and while Toronto’s subway system is underground downtown, bus and streetcar routes are impacted by street closures. Just as motorists and pedestrians will be redirected for a job’s duration, the TTC also needs to plan alternate routes.

Because there are subway tunnels, hydro infrastructure and other amenities underneath Yonge Street, Amherst and city engineers needed to ensure the area where the crane was set up could tolerate the weight.

Crews set up on mats, with engineered heavy point loads calculated to accommodate the 190,000-lb. crane.

“We provided them with all the crane loadings and came to agreement as to where the crane could sit on the road,” Welstead said.

It also took time to arrange for permits, paid-duty police officers and other supports. With a significant amount of on-site staging work, and numerous components needing to be hoisted, Amherst avoided chaos by scheduling the project for the Victoria Day long weekend.

“We had to take some of the older equipment out and put up some steel and other components to accommodate the new equipment up there, so there were multiple smaller lifts as well as a heavy lift,” Welstead said. “We’d hoist stuff down, put new stuff up. Then they would be fabricating and we’d start working on other stuff — taking down older frames and things like that.”

On more modest jobs, crews might normally arrive on a Friday evening to assemble the crane so it’s ready to hoist Saturday morning, and then wrap up and leave midday on the Sunday. The extra day afforded by the long weekend offered wiggle room, though crews were gone by mid morning on the holiday Monday.

“If we’d had to interrupt traffic for a whole other weekend to finish, it wouldn’t be in the city’s best interests,” Welstead said.

While the customer brought in two other contractors to handle other components of the job, Amherst relied as much as possible on its own equipment and services, opting not to sub out anything it was responsible for.

“That way we can ensure being on time and everything’s working properly and we don’t get a let-down,” Welstead said.

This included trailers, secondary equipment and services, and a second crane — a Liebherr, LTM 1055 all-terrain machine — to set up and dismantle the main crane.

While severe weather can put best-planned timing in jeopardy, crews endured nothing more than light showers on the Saturday.

“High wind and lightning can be a challenge if we have all of this set up ahead of time,” Welstead said.

Graham Morrison, the crane operator Amherst assigned to the job who also served as site supervisor, said the lift had its challenges but was mostly straightforward.

“We had five different trades working all at the same time in the same confined space,” said Morrison, a member of the International Union of Operating Engineers (IUOE) Local 793. “There were only three companies, but we were dealing with pipefitters, electricians, millwrights, welders and crane operators.”

Morrison described the rigging, which he oversaw, as standard, with nylon belts, steel chokers, steel beams and spreader bars used to help protect the load from potential damage. Morrison concurred with Welstead that the LTM 1400’s compact nature and its ability to avoid a boom-launching manoeuvre played a major role in getting the job done within a tight time frame.

“By 10 o’clock Monday morning we were gone and the street was reopened. We were right on schedule,” he said.

An Amherst Crane Rentals employee rigging a frame with a belt choker.