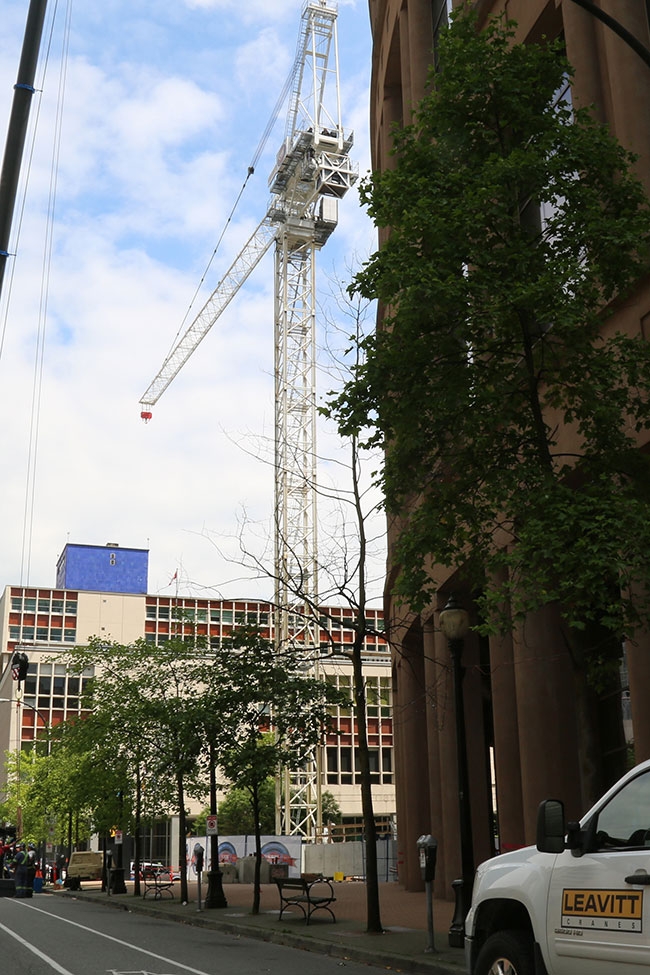 For more than a century, the Vancouver Public Library (VPL) has been dedicated to offering free access to reading materials to residents in the Vancouver area, while promoting the joy of reading and learning to all.

Although the mediums through which people learn and access information have changed somewhat over the years, the VPL has kept pace with the needs of both young and old. Last year alone, the VPL had more than 6.8 million visitors across its 21 locations, with close to 9.4 million physical and digital items borrowed by residents.

As part of continuing to keep pace with the needs and changing learning experiences of residents, the VPL decided to expand its Central Library, which included the renovation of the building’s top two floors to include a reading room, new community event and meeting space, exhibit spaces, a theatre and a ‘garden in the sky’ public garden, among other enhancements.

Construction on the two floors began in the spring of 2017 and was preformed by Vancouver-based contractors Smith Bros. & Wilson (BC) Ltd. (SBW) of Vancouver. The doors to the new facilities are expected to open to the public this spring. The expansion will add another 35,000 square feet to the library.

One of the biggest challenges facing SBW was planning out how to perform the necessary lifts in the congested area surrounding the Central Library, located on the busy West Georgia Street in the city’s downtown. The moving of demolition and construction materials onto the 8th and 9th floors required a well thought-out plan of attack.

“All the demo material had to be removed and the library only had service elevators to get material from the top floors to street level,” explains Tyler Brown, general superintendent for SBW. “During the tender phase, we saw the need to hoist many items, including large-span escalators to get people up to the green space. It was quite a challenging prospect.”

Adding to the project’s challenges was the building’s unique architecture, which required additional pre-planning during the bidding phase. To help find the right lifting solutions for the project, SBW sat down with Leavitt Machinery, based out of Surrey, B.C.

“The library is designed after the Roman Colosseum and surrounded by an elliptical wall on the east side,” says Dean Arsene, crane rental and sales representative for Leavitt Machinery. “We started discussing the project with SBW in late 2016, and all options were reviewed.”

SBW initially considered using mobile cranes to perform the heavy lifting from street level, but after identifying drawbacks to this plan of attack the company decided to pursue other options.

“The structure’s shape required a minimum of a 500-tonne (600-ton) capacity class mobile crane to hoist large materials to and from the upper floors because it would be boom bound,” explains Brown, adding that the possible set-up locations for a mobile crane at the site did not offer capacity to lift many of the objects at the required boom lengths and working radii. “This meant we would have had to shut down an entire street, and mobilization costs would have been high. By the time we counted everything that needed to be hoisted, it was cost-prohibitive to use a mobile crane.”

With mobile cranes out as an option, SBW decided it would look at using tower cranes for the project, reviewing flat top, hammerhead and luffing jib designs.

“The job required a 180.4-foot (55-metre) boom radius, and the flat top and hammerhead cranes didn’t offer the capacity we needed for the escalators without breaking them down,” Brown says, adding there was a more pressing issue, as the crane would be placed about 50 feet from an adjacent structure.

“Those booms were too long, and they didn’t have the freedom to slew without hitting a structure, so these designs were not an option,” explains Arsene.

In the end, SBW decided the right crane for the project was a luffing jib tower crane, and opted for the Terex CTL 430-24; which met the project’s reach and capacity requirements.

“Through our discussions with Leavitt, we calculated the luffing jib as the most economical hoisting logistics solution for us,” Brown says.

“Using the luffing jib allowed us to position the tower closer to the library structure, but, even still, most of our lifts were made close to tip radius of the 180.4-ft. (55-m) jib,” says Brown.

“When the crane was not in service, the jib was set to a 65-degree radius to allow it to slew without hitting any of the adjacent structures,” adds Arsene.

Thanks to careful planning, Leavitt and SBW were able to install the crane without any major issues over a weekend in June. The City of Vancouver permitted the closing of the adjacent Homer Street to allow for the installation.

“Using a 300-tonne (350-ton) capacity mobile crane, we installed the tower, counter jib and apex on day one,” recalls Arsene. “On day two, we installed the jib and counterweight. It was a very smooth set-up, and we were done in about 1.5 days.”

The crane was used daily during the demolition phase of the operation for the removal of large structural pieces and concrete from the rooftop. During the reconstruction phase of the project, the crane is being used to hoist building materials and full concrete buckets from street level to the 8th and 9th floors. The largest and heaviest planned lifts were for two 12,000-lb. (5.4-tonne) escalators that were hoisted into position without disassembly to save time and money.

The luffing jib tower crane hadn’t been taken down yet at the time of this issue’s publication, but Arsene says there are plans for it to be disassembled sometime in February, on a weekend when they are able to shut down the surrounding busy streets.

With everything moving according to schedule, the inhabitants of Vancouver’s downtown will be able to enjoy the new facilities at VBL’s Central Library in the very near future.

With files from Terex Cranes.