Features
It takes a Beast to build a bridge in Victoria 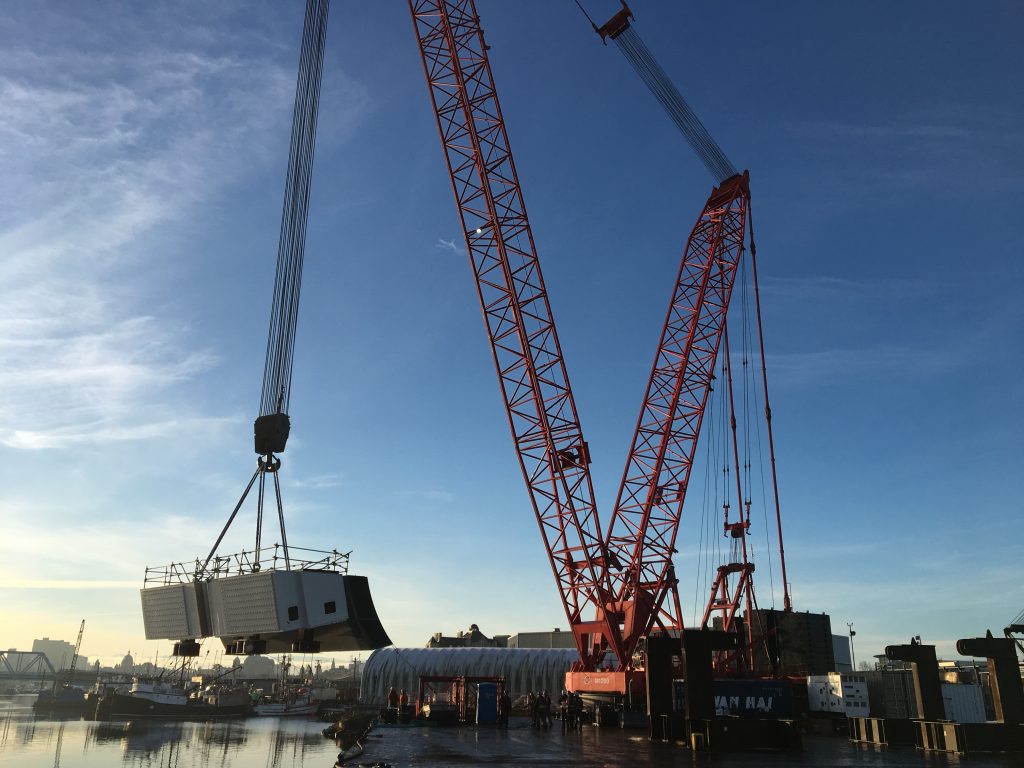 When the crane used to erect the new Johnson Street Bridge in Victoria crossed the Strait of Georgia from its home base in Vancouver, it didn’t take the ferry.

“It could lift the ferry,” Jonathan Huggett, project director with the City of Victoria, said with a laugh when Crane & Hoist Canada asked, tongue-in-cheek, if the Dynamic Beast, a leviathan in the world of barge-mounted cranes, hitched a ride.

All kidding aside, the $105-million project is serious business. The original bridge, which dates back to 1924, was rusting badly and didn’t meet modern earthquake standards spelled out in recent revisions to Canada’s National Building Code.

“Victoria is now seen as having a higher risk than Vancouver because the San Juan Fault is right off the coast,” Huggett explained. “A lot of people in the community said the existing bridge should have been rehabilitated, but it would not have been seismically stable.”

The project has been loaded with challenges, and Huggett said these have been met through advanced planning, careful engineering, and employing the heaviest-duty barge-mounted crane available in British Columbia.

Just four years ago, when Huggett joined the team, another barge-mounted crane, the Arctic Tuk, was the reigning heavyweight. Rented from Amix Group, it featured a rebuilt Manitowoc 4600 Series-3 crane with a Series-2 ringer attachment. It had a 600-ton lifting capacity and saw duty removing an old railway crossing and installing concrete beams on the approach span to the new bridge.

In early 2017, while preparing to erect the new single-leaf bascule bridge, billed as one of the largest of its kind in the world, the project team caught wind of the Dynamic Beast, a new, heavier-capacity barge-mounted crane available through Dynamic Heavy Lift.

The timing was prescient because the plan was to assemble the bridge off-site in order to reduce time spent hoisting on-site and ease the impact on commercial-industrial marine traffic underneath. By integrating a 900-ton-capacity Manitowoc M-1200 Ringer crane with a Manitowoc M-250 crawler, the Dynamic Beast exceeded the Arctic Tuk’s capacity by 50 per cent, essentially making it possible to lift the enormous prefabricated sections.

The Dynamic Beast is essentially the sum of its components. Clarke Longmuir, general manager with Dynamic Heavy Lift, said the M-1200 was built in 1997 and acquired from a construction firm in South Korea.

“It was 20 [years old] when we bought it, but it hadn’t had a lot of use,” Longmuir said. “It was well cared for and all the structural components were in very good condition. We replaced most of the hydraulic lines and connections, and replaced or reconditioned various parts on the crane.”

Dynamic Heavy Lift sourced the barge from a U.S. company using it in Mexico. Longmuir said its flat-bottom hull offers stability for crane operations and a raked bow and stern with large skegs makes it tow well for a barge of its size.

Longmuir said ringer crane configurations are designed to maximize lift capacity by increasing counterweight, lengthening the distance between the boom and counterweight, and using a larger, stronger boom — basically, making it a bigger crane.

While the Dynamic Beast’s rated lift capacity is 900 tons, improved reach also mattered. Crews use the service crane to help switch between different booms, which range from 150 to 400 feet and offer dexterity.

In all, the Dynamic Beast hoisted two 270-ton rings and a 470-ton span in three separate lifts, each taking a full day. The rings and span were lifted into place on supports, and crews used hydraulic jacks to fine-tune their placement to the nearest millimetre before bolting them together.

“When you lift the pieces you need to know with certainty you’re going to be able to place them down exactly where you want them,” Huggett explained.

Still, there were tense moments, particularly with the 470-ton span.

“We didn’t know exactly how much this thing weighed until we got it in the air,” Huggett said. “We calculated what we thought it weighed, but our calculations weren’t quite right. One end tipped up very slightly — not very much, but enough to stop the attachment. We knew this might happen, so we loaded some heavy concrete blocks on one end to bring it down so it was exactly horizontal. We would not have been able to place if it was tilted in one direction.”

In the end, Huggett said, the lifts proceeded seamlessly. “One challenge was that we were doing it in the middle of the downtown of a major city, in a very confined space, under the gaze of every member of the public.”

Huggett spent much of the time watching from different vantage points and speaking with TV journalists who had joined large crowds of onlookers.

“Watching the people actually do the work was a great sense of joy,” he said. “To the average untrained eye, you wouldn’t have realized what the operator was doing. But on a couple of occasions he did what’s called feathering, where you give the load a slight nudge so it swings where you want it to go. But you don’t nudge it too much because you lose control — just enough so it generally goes where you want it to go. The skill in doing that, the fine-tuning, was amazing.”

Huggett said he was impressed by up to 50 unionized ironworkers holding ropes and helping out, and supervisors giving direction. “PCL brought in at least two experienced superintendents from other projects around North America who had done this kind of heavy lift work before. We had an army of experts floating around, and Dynamic had its own crane operator who does nothing but operate this Dynamic Beast.”

The scheduled launch was March 31, and when the new bridge opens to traffic, crews plan to use the Dynamic Beast to help demolish the old structure, which has remained in place during construction in order to maintain traffic flow on Johnson Street. The barge will then haul the steel for recycling.

While the Dynamic Beast works hard, it’s towed like royalty on a sedan from job to job. A non-powered vessel, a single tugboat tows it at a speed of roughly 4.5 knots, with trips between Vancouver to Victoria taking about 20 hours.

As a rental unit, the Dynamic Beast’s work never ceases. Another ongoing project has been helping install a ship-loader system at Alliance Grain Terminals at the Port of Vancouver, and future travels could land the barge and crane anywhere along the B.C. coast or beyond.