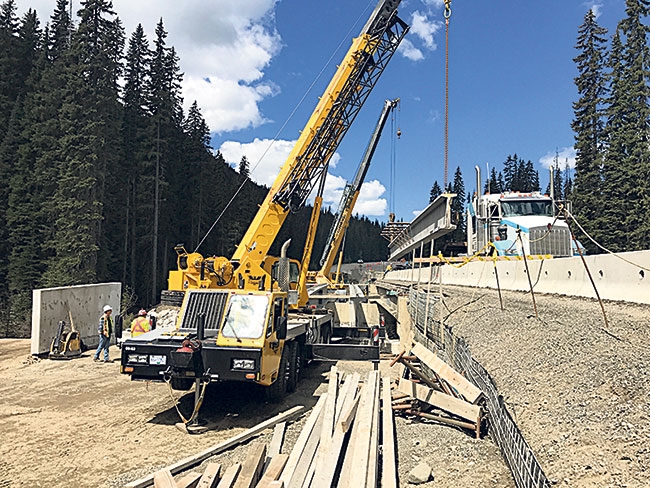 It took three construction seasons, but the Upper Cambie Bridge has been replaced. The $7.7-million project began in May 2015, involving the replacement of the aging bridge located on the summit of Highway 3 (Crowsnest), east of Allison Pass, and west of the Manning Park Resort, about 60 kilometres east of Hope, B.C.

“This bridge replacement was necessary because the previous bridge at this site had reached the end of its service life, and a stronger, more robust bridge was needed to cross the Similkameen River,” stated Minister of Transportation and Infrastructure Claire Trevena.

Emil Anderson Maintenance Co., which performs regular highway and maintenance work in the area, was awarded the contract for the four-lane, 95-foot single span BC MoTI Type IV Pressed I-Girder bridge, which included improvements to the bridge approach areas, a higher clearance above the water to better withstand flood events and ice flows, a wider bridge deck and wider shoulders to better accommodate traffic, cyclists and pedestrians, according to the B.C. Ministry of Transportation and Infrastructure.

Ten 85-ton girders, built by Armtec and transported to the site by Triton Transport, were lifted into place to build the new bridge. To complete the lifts, Emil Anderson Maintenance Co. relied on a combination of a Grove 50-ton rough terrain crane from its fleet, and a second crane they outsourced.

Although the replacement of the small bridge was not overly complex, the project still required three construction seasons to complete due to its remote location.

“It’s at the summit of a pass of one of the highways,” Atwell explains, adding that the harsh weather at the summit creates a shortened construction season. “You only have a six-month season out there… it’s at the summit and is the highest structure on that highway. The girders’ transportation, which were manufactured in Richmond, going through the mountain pass is always interesting when moving 100-foot loads.”

Apart from the bridge’s remote location, no big challenges popped up that needed to be overcome over the course of the project. The lifts, like the rest of the project went very smoothly, much to Atwell’s delight.

“It was very straightforward, that’s how we like them,” he says.

Related
Cranes do heavy lifting at Crowchild Bridge in Calgary
It takes a Beast to build a bridge in Victoria
Women in the crane industry
Hoisting in downtown Toronto? Advance planning is key
Tags