Cranes will do heavy lifting — and keep watch 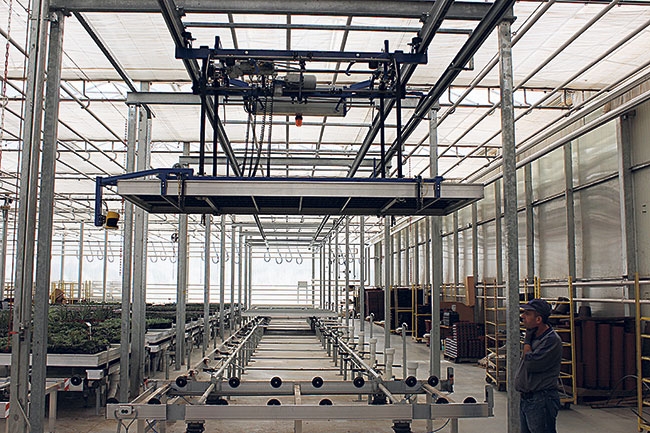 As Canada moves towards legalizing marijuana

As Canada moves towards legalizing marijuana for recreational use, cranes are poised to gain a foothold in a budding new industry.

In a statement announcing plans for a giant cannabis grow facility in Alberta, Aurora Cannabis said it would deploy cranes and conveyors specifically designed for indoor agricultural settings.

Health Canada issued its first medical marijuana permits in 2002, and Aurora burst on the scene in 2014 with a small grow facility in Cremona, Alta. Now, with recreational legality just around the corner, market opportunities stand to grow significantly and Aurora has mainstream production in mind.

“There isn’t enough supply even for all the medical patients out there,” says Joel Fuzat, senior project coordinator with Aurora. “Our Cremona facility is already maxed out at just over 19,000 patients, and with recreational coming on-market there’s going to be something to the effect of at least 7.5 million users in the first year of legalization.”

By any agricultural measure the Cremona operation is small potatoes, at 55,200 square feet. Aurora is also opening a 40,000-square-foot facility in the Montreal suburb of Pointe Claire, but that, too, is relatively modest.

It’s a new 800,000-square-foot greenhouse in Leduc, Alta. adjacent to Edmonton International Airport that will use cranes in everyday production. Fuzat says the facility, known as Sky, should be up and running later this year.

Because of its sheer size, Sky will be highly automated, partly to optimize greenhouse equipment and also to help avoid some of the more backbreaking work that comes with greenhouse growing.

Aurora plans to use two small overhead cranes manufactured by Netherlands-based Codema Systems Group to work with robots to handle up to 400,000 plants that will be growing at various stages at any given time.

As the plants grow, the tables holding the plants need to be moved from zone to zone, and that’s where the cranes fit in. “All that transportation takes place via the overhead crane system,” Fuzat explains.

The cranes will work from overhead tracking and rely on software to know what needs hoisting. Using tines and safety-like harnesses that reach downwards, the cranes will grasp and cradle the 6-by-15-foot tables, which can weigh roughly 1,000 pounds with product, and move them where they need to go next.

When a table-load of plants matures and is harvested, the cranes will carry the empty tables to an automated washing centre for their eventual clean reintroduction into the growing cycle.

“The whole idea of the cranes is to eliminate back-breaking labour and speed things up,” Fuzat says.

Automation is key to the whole process, and the crane systems will do more than lift. The cranes will carry sensors and operational software, with RFID tagging, to keep track of the plants so management and staff know which plants are where and in what number at any given time.

Fuzat says Aurora also wants to minimize the use of chemicals, so the company plans to attach small visioning, data-capturing and logging systems to spot diseases and poor plant health.

“Cannabis is a very sensitive plant,” Fuzat explains. “There are any number of pests and diseases that, once they get a hold of cannabis, can flourish very quickly. So those cranes are doing double duty in also being a guard, observing our crops and alerting us if there are insects or microbial damage.”

The system also consists of conveyor belts, which Aurora will use to move harvested plant material in one direction and residual waste in another.

While Aurora sourced the overhead cranes directly from Codema, Tava Systems, based in Beamsville, Ont. with its parent Zwart Systems, serves as Codema’s North American distribution partner. Isaac Van Geest, Tava’s sales and project manager, says the cranes can be attached to I-beams located on a ceiling, as in Aurora’s case. But the cranes can also work from a stand mounted at ground level, with I-beams still located overhead. It all depends on the facility they’re used in, Van Geest says.

Tava supplies an array of products, including conveyors and irrigation systems, to a broad greenhouse market, and cranes are nowhere near the distributor’s top seller at this time. Van Geest says Tava had just two other crane-deploying customers at press time, including a grower of succulent plants, also in Beamsville, and a potted mums supplier in Abbotsford, B.C.

Van Geest concedes Tava’s earliest cranes sales were partly driven by “a cool factor… where you bring buyers through your greenhouse and you have automation. There’s also a comfort feeling that you can produce — that’s really the reason why the first ones were sold.”

These days the driver is cost, following a trend that began a quarter century ago in the Netherlands.

“The Netherlands is the agricultural hub of the world,” Van Geest says, offering that the European country has a half-dozen agricultural crane manufacturers and 12,000 greenhouse operations — roughly the same number of greenhouses as in all of North America.

“The need there is higher mainly because of high labour and land costs,” Van Geest says. “In North America land and labour have been cheap, but that’s changing.”

While the price tag ultimately depends on features such as lifting capacity and accessories, the cranes and the hardware they’re attached to cost roughly $250,000, Van Geest says.

As with many investments, the potential savings are long term. Van Geest estimates a fully automated system could save close to 45 per cent on labour costs, alone.

“We’re just on the beginning of cranes in Canada,” Van Geest says. “I think we’re going to see a lot more of them due to labour rates — it’s really the only consideration at this moment.”

Joel Fuzat doesn’t see installing cranes at Aurora Cannabis’ two smaller facilities, but he does think the systems make sense for anything on the scale of Sky.

“As we continue building these larger types of greenhouses in the future we’ll continue using this automation, with solutions smarter and smarter as we learn from each project.”

Related
Cranes and cannabis: Truth vs myths
Preparing your pot playbook
Legally high
A trailblazer for standards in Alberta
Tags