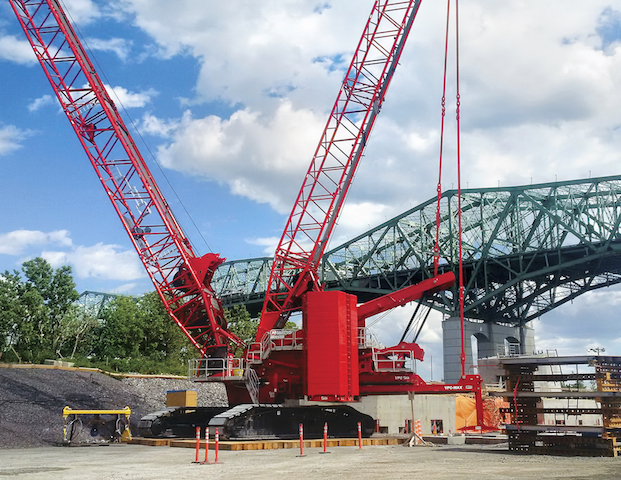 Cranes hard at work on replacement for historic Champlain Bridge

New, rare crane sightings have been reported on the St. Lawrence Seaway in Montreal.

However, you won’t need binoculars to spot the two Manitowoc MLC650 lattice-boom crawlers and other high-end cranes being used to build the new Champlain Bridge. The machines are massive.

The 3.3-kilometre Champlain Bridge, with a projected $4.239-billion cost, is one of the biggest infrastructure projects currently underway in Canada.

The new cable-stayed bridge replaces an existing one bearing the same name that has aged considerably in recent years. Construction started last year and, with 10,000 pre-cast concrete components, hundreds of steel tub-girder segments, and dozens of 1,000-ton footings and 450-ton steel pier caps, the job calls for some seriously heavy-duty lifting.

Specially designed and built for the project by Sarens in Belgium, the floating footing installer can withstand powerful river currents. The installer features a turntable within its lifting apparatus that allows for 360-degree rotation, and uses a large gantry and eight strand-jacks to transport more than three dozen footings for installation on the bedrock underneath the Saint Lawrence River.

The two MLC650 cranes are perhaps the most unique breed of crane on the job. Each includes a variable position counterweight feature known as VPC-Max.

“You don’t have any contact on the ground when you’re using the attachment,” says Alex Beaudreau, territory manager for Strongco. “It takes less time to be rigged up and ready to work, and you have a better capacity — a lot of assist, for the size of it.”

Some of the structural lifts were still in the planning and engineering stages at press time, with some lifts expected to exceed 400 tons.

There’s little room for access or maneuvering anywhere on site and the cranes will be attending to both the cable-stayed bridge and the East Approach, says André Mylocopos, Signature’s construction director for the bridge’s east and west approaches.

This is where the movable counterweight on the MLC650 VPC-MAX feature comes into play, offering a smaller footprint and increased maneuverability. “There’s not much room for access and the cranes are going to be working pretty hard,” Mylocopos explains.

After completing the lifts on the cable-stayed bridge, the two MLC650 machines will be dismantled and trucked to the East Approach to erect tub-girders weighing up to 350 tons and pier cap components weighing up to 230 tons.

For each MLC650, 46 transport trucks were needed to bring the components in from Manitowoc in Wisconsin, and the same number will be needed to haul them to the East Approach.

Even in the world of cranes, the MLC650 is a rare breed. Strongco’s Alex Beaudreau says this is the first time he’s seen them used in Canada, and Harley Smith, Manitowoc’s global product director for crawler cranes, confirms this.

“A little over 15 have been delivered worldwide,” Smith says, identifying Australia, South Korea, and the U.S. as among the destinations.

Describing the MLC650 as one of the newest platforms, Smith says the VPC-Max is an optional lifting accessory for users who want to maximize the overall capacity of the crane.

“It allows the counterweight to go to a further radius and increases the capacity of what we identify as the base rating for the machine,” Smith says, adding that MLC650 cranes have also been used for extremely heavy lifting at new stadiums, petrochemical operations and wind farms.

“Wind towers are getting taller and the wind turbines from these towers are getting heavier,” Smith explains. “In the past that work had been largely defined by the 16000. But now that those projects have grown up a little bit and become larger, they’ve moved into the class for the MLC650.”

Smith declined to reveal the price tag of an MLC650, other than to confirm it would be between $4-million and $8-million, depending on attachments and contract terms. “We’re pretty tight-lipped about the cost of the machine,” he said. “There’s a lot of options we can present from a base machine-up perspective.”

The MLC650 and 16000 behemoths aren’t the only ones working on the Champlain Bridge. Strongco also supplied multiple Grove rough-terrain cranes, including 135-tonne RT9150E and 120-tonne RT9130E-2 models, which offer significant boom length and will see duty moving things around.

Bringing in the ringers

The two Manitowoc M250 cranes, each with a M-1200 ringer attachment, will offer 900 and 1433 imperial ton hoisting capacity, respectively, and work from large composite barges measuring roughly 150 by 220 feet.

These M250 cranes, which will hoist large steel tub girders weighing up to 400 tons as well as other bridge components, offer 800 and 1,000 tons of counterweight and required 65 and 100 truckloads, respectively, to bring them to the project site. No surprise given that the rings measure 60 feet in diameter and the main booms are long enough to fit two tractor-trailers end to end.

“For a ringer configuration, you would typically put a larger capacity boom on a carrier that would be mounted to a ring structure that would be supported with screw jacks or something like that for the ground preparation,” Smith says.

Manitowoc may be one of the main crane suppliers, but work crews have also used an enormous transporter, manufactured by Dorman Long Technology, nicknamed “Thor the Ant.” The DL-MT1000 Mega Transporter and a 1,000-tonne-capacity 2.5-metre stroke jack-up system were used to deliver precast concrete footings and side-span piers to the catamaran this past February.

Standard self-propelled modular transporters were considered for the project but were deemed too long to turn within the narrow confines of the site. The DL-MT1000 uses aerospace tires to increase the load carrying capacity, per axle, thus shortening the vehicle length.

An operator walking alongside the DL-MT1000 controls it wirelessly, and a synchronized jacking system is used to position the load onto the catamaran.

Strongco’s Alex Beaudreau expresses awe for the project’s overall scope. “I’m really impressed by what they will do with our equipment, and what it will look like at the end.”

Bridge completion is anticipated by December 2018, with the old structure remaining in place until the new one is opened to traffic. Proponents say all work will be completed by October 2019.