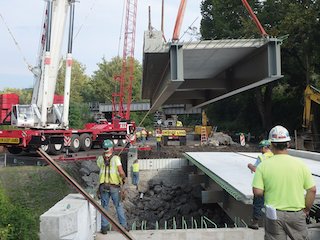 Rehabilitation plans for Toronto’s Gardiner Expressway is good news for the crane industry. If the city approves accelerated bridge construction, or ABC method, it could be better yet.

The director of design and construction for Toronto’s Engineering and Construction Services Division, said crane jobs will be recreated regardless of how the work is completed. However, ABC tends to be crane intensive, Frank Clarizo said.

“It will require large mobile cranes,” Clarizo said. “They need to be of a certain size and capacity to handle the pre-cast deck sections.”

Work on the Gardiner upgrade is expected to begin in late 2018 or early 2019, he said. Council is to choose among proposals by the middle of 2018.

“We need to evaluate what the private firms submit,” Clarizo said. “We’re going to leave it up to the bidders to see which strategy is the most economically feasible solution.”

It’s not simply a matter of adding up the dollars and cents of construction costs.

$3 billion in savings for drivers expected

In a 2014 report to council, the city’s engineers estimated that a proposal utilizing ABC would bump the total cost of the project to almost $1.9 billion over 25 years. That’s about $115 million more than if conventional bridge construction were to be used.

One thing that gives ABC the edge is the impact on drivers who use this key transportation corridor that connects Highway 427 to Toronto’s downtown core. It’s estimated that ABC will result in far fewer construction-related traffic impacts — a savings of $3 billion for the 200,000 drivers using the Gardiner each day.

With ABC, traffic impacts are minimized. The same cranes that remove old deck sections with girders attached are also used to place the new prefabricated girders and deck sections.

Clarizo said work can often be carried out overnight when there’s far less traffic. Overall, it’s estimated that this accelerated approach would reduce construction-related traffic impact time by 40 per cent.

In addition, ABC would reduce dust and noise, construction quality could be better controlled with off-site fabrication, weather-related construction delays are far less likely, and the service life of the bridges is expected to be at least 15 years longer with prefabricated components.

On the down side, the costs are initially higher and components will need to meet rigorous specifications to avoid installation delays.

Another concern is the possibility of unforeseen problems related to using a relatively new technology. However, the highway construction industry in North America is becoming more comfortable with the technique.

One notable success story was the replacement of 14 bridges over 10 weekends along Interstate 93 in Massachusetts. The U.S. Federal Highway Administration attaches greater safety, quality, durability and lower social and environmental costs to ABC.

Interest in the Gardiner rehabilitation project is considerable, given the dollars being spent by various levels of government.

Brian Hall, managing director of the Canadian Precast Prestressed Concrete Institute, said members of the industry group hope to be part of the project. There’s concern, however, the contractor involved may set up their own pre-cast plant rather than relying on existing plants.

“There are 16 precast plants in Ontario and probably six of them, all in the Toronto area, can do that job,” Hall said.

Hall said the demand for bridge replacement components could be met with “just-in-time” deliveries.

Dr. Doug Hooten, a consulting engineer and professor at the University of Toronto, agreed that existing precast suppliers could deliver components.

However, Hooten said that depending on the specific technology or technologies chosen for the multi-year project, an on-site precast facility or facilities may be needed.

He cited an example at Yorkdale and Highway 401 in the city where the deck and supporting girders were set in place together. That would not have been possible without on-site fabrication.

Both Hooten and Clarizo said the term “accelerated bridge construction” could encompass different technologies or a combination of technologies.

As another example, Hooten cited a Hamilton project in 2010 at the Aberdeen Bridge crossing of Highway 403. Giant lifting devices known as self-propelled modular transporters, or SPMTs, were used. They’re the same type of multi-axle machine used by NASA to move space shuttles.

According to a report in Heavy Equipment Guide, new bridge sections including deck, girders, barriers and waterproofing were first prefabricated in a staging area. Then one SPTM was used to remove the interior spans from the piers and another to put the new spans in place.

Highway 403 was closed overnight on a Friday for this part of the project.

On the Saturday, cranes were used to replace the bridge’s end sections. With all the sections replaced, concrete was poured to connect the components and by early Monday morning the bridge crossing the 403 was reopened to traffic.