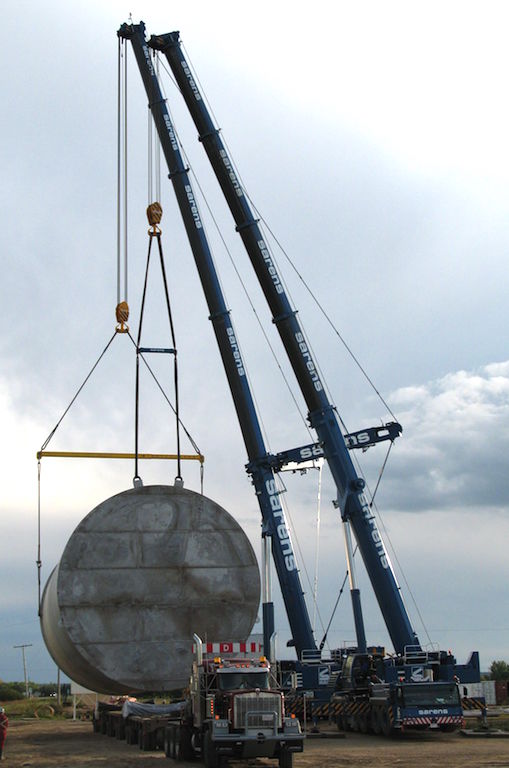 The load: a gargantuan steel tank which was installed at SaskPower’s Carbon Capture and Storage Project at the Boundary Dam Power Station in Estevan, Sask.

“It’s about 33 feet in diameter and 65 feet high,” said Jeff Burton, director of operations for AGI-Envirotank. “They wanted us to shop-build it. Saskpower didn’t have any land on site where we could field build it.”

Sarens’ first job in the project, which took place in September, was to lift the 99,780 kilogram tank at AGI-Envirotank’s site in Biggar, Sask., and maneuver it onto a Mammoet lifting trailer, which took it to the SaskPower facility in Estevan. Justin Kshyk, crane and rigging supervisor for Sarens Canada, said Liebherr cranes were employed for the lifts, starting with a 500 tonne LTM 1400 and a 300 tonne LTM 1250. The 1400 did the bulk of the lifting, with the 1250 helping to position the tank.

“The 1400 was optimal for the Biggar project because it’s mobile,” Kshyk said. “It’s a quicker rig up, so we were able to travel it down to Biggar and rig it up within one day, do the lift, bring it down and send the crane home. It was a pretty minimal rig up time for the weight capacity we were able to achieve with it.”

The drive from Biggar to Estevan was estimated for six days, but it took about a week and a half because poor weather caused delays and power lines had to be moved out of the way. The transport of the giant tank became something of a social media event, Burton said.

“SaskPower tweeted out that it was coming,” Burton said. “During that week and a half, we had like 50 or 60 tweets and pictures of people who spotted it on its way. It became like a moving attraction. I’ve never had that happen before.”

While the tank made its slow journey, Sarens’ LTM 1250 travelled to Estevan and was used to set up an LR 1600 crawler crane. Together, the 1250 and the 1600 were used for the most challenging part of the job – lifting the giant tank up and over the SaskPower facility, lowering it through a hole in the roof and positioning it within an existing concrete tank with only inches of clearance on either side. The 1600 did the main lifting while the 1250 again helped with positioning. Turnbuckles were used on the top of the tank to ensure it was hanging level for installation.

“When we did the lifts, with the configuration that we had, I think we had 72 meters of main boom,” says Kshyk. “We had two to three inches of boom clearance. We went very slow, used tape measures at the top to make sure our distance was the same all the way around. As we went down the old tank got narrower and we had to just maintain that as best we could.”

Because of the slim margin of error in the final lift, Sarens undertook a trial lift to ensure that the operation could be performed as expected. Rodney Hopp, field project manager for AGI-Envirotank, said another key safety precaution was evacuating the building where the tank was being installed.

“You can’t have anyone working underneath a load, with the boom swinging overhead with the potential of something going wrong like the crane collapsing,” Hopp said. “You’ve got to have that area safeguarded.”

Kshyk was quick to credit that sort of planning and precautions, from the engineers’ drafts to proper site preparation, for the relative ease of the lift in the end.

“It was a nice lift,” Kshyk said. “It was tight, but it couldn’t have gone any better.”