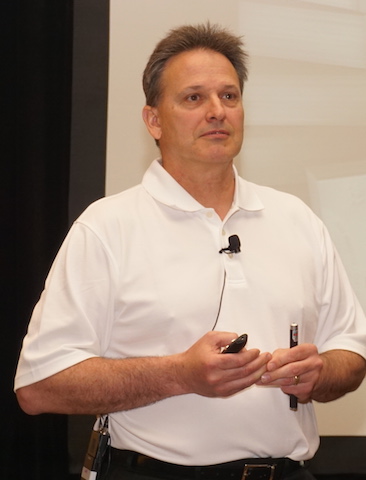 Larry Weyers Larry Weyers of Manitowoc Cranes Inc. offers his insights into how to make money from a crane. Initial cost

How does a customer make money with a crane?

It depends on the customer, a senior executive with Manitowoc Cranes Inc. told a recent crane industry conference in Montreal.

When Larry Weyers, executive vice-president of Manitowoc Cranes Inc., asked that question of

the manufacturer’s product development team, he received a predictable answer: “the customer buys a crane and he gets paid for lifting stuff.”

That, Weyers said, is “the bubble gum.” What he wanted to learn about is the flavour of the gum “because before you design a crane you want to make sure you understand how people make money through the product they buy from us.”

The engineers, purchasing agents and reliability professionals who make up Manitowoc’s  product development team don’t come in contact with crane customers every day, Weyers said. So the company reached out in recent years to rental and construction companies to find out about their business models. While each one differs in various respects, some commonalities became apparent.

What does it cost?

“The first piece obviously is what does it cost to buy an asset and measure the return on it?” said Weyers, who at the time of his presentation at the 2015 Crane Rental Association of Canada annual conference was vice-president of Manitowoc Cranes America and of global sales and marketing.

A rental company will need to know the estimated monthly rental rate on the asset over a period of time, he said. The company also needs to know the average utilization of the asset during that time.

Financing, depreciation, and maintenance costs also need to be factored in. Financing will involve a monthly interest expense. A company needs to decide how long it will depreciate an asset before selling it. Maintenance costs need to be accounted for. That can be by assigning a percentage of the monthly rental rate to maintenance or, as some companies do, by tracking the hours a crane is actually available for work.

A top consideration for any owner of a crane, though, is its resale value. For many cranes, that can be considerable.

For example, Weyers said Manitowoc looked at cranes that Dan McGlade auctioned off in March 2015, for US$35 million, as part of the deal to sell his Casper, Wy.-based Energy Transportation LLCC to NCSG Crane & Heavy Haul Corporation.

“So I think I’m in the wrong business,” Weyers said. “I should have been in the crane rental business.”

With those notions in mind, Weyers said, Manitowoc’s development team was told not to focus on developing cranes that are bigger and better than the competition’s machines but to work on designs that enable a customer to make more money with the crane.

Weyers’s presentation segued into a pitch about how Manitowoc’s variable position counterweight can save money on the operation of a crawler crane. The VPC, which the company introduced about five years ago, is a “revolutionary design” that eliminates the car body counterweight, Weyers said.

Consequently, a crane equipped with VPC has a smaller footprint and applies less ground-bearing pressure — which reduces the operating cost. For example, a VPC-equipped crane requires a work area nine times smaller than necessary for a similar crane with a hanging tray or wagon bearing the counterweight.

The VPC also uses about 30 per cent less counterweight to begin with. That translates into 19 fewer truckloads to move the counterweight on an MLC650.

According to a slide with Weyers’s presentation, that would mean a savings of $193,000 in a hypothetical move of that crane from Regina to Quebec City.

“These are all the things that the product development team worked on in looking at how do you improve the ROI for the customer and the contractor going forward,” Weyers said.

At least one person in the audience wasn’t impressed. Rüdiger Zollondz, senior manager of marketing at Terex Cranes, questioned the stability of the VPC system should the crane tilt backwards.

Weyers said the VPC system meets both the ANSI and EN 1300 standards and that it has a “kickstand” that will come in contact during a catastrophic failure “similar to a hanging tray or anything else and that has been approved by EN 1300 the standard.”

Weyers added that in most recent accidents involving big crawlers, they tipped forward. “And with the VPC having that counterweight keep the load moment centred, it’s going to be a much safer crane than a standard lift crane,” he said.

In recent years, Manitowoc has invested in product verification centres, what Weyers described as “equivalent to the underwriter’s laboratory of the crane business.” One of those centres, in Shady Grove, Pa., is for mobile and crawler cranes, while centres in France are for slewing tower cranes and self-erecting cranes. The company was building a fourth centre in Germany as Weyers spoke.

“I had one customer tell me, who’s in the room here, that an extended warranty does me no good when the crane is stopping the job,” Weyers said.

At these centres, crane components can be put in a climate chamber to expose them to temperature extremes of -40 F to 170 F. Cold-weather testing enabled Manitowoc to develop Arctic package kits for its rough-terrain cranes, for example.

Joysticks, for example, are run through three million cycles to test the durability of the boot.

“How many times do you have a operator that spills coffee or spills their Coca Cola? That boots get ripped and comes out and stuff gets down into your mechanisms,” Weyers said. “That’s how the majority of these things fail.”

Nine times out of 10, a crane’s problem is electrical. To make it easier to deal with those problems, Manitowoc introduced a crane control system that is identical for all its cranes, whether tower cranes, crawlers, or RTs.

What that means for a customer is having to stock fewer replacement parts. It also means less training for service technicians and crane operators, he noted.