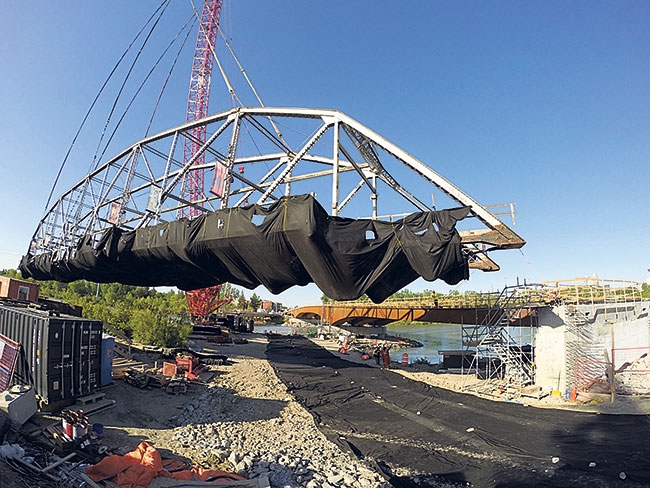 A Liebherr LR1350 lifts Calgary’s 12th Street S.E. Bridge. The bridge was originally constructed in 1908. This May

This past May, Calgary’s historic 12th Street S.E. Bridge was removed. The “Zoo Bridge”, which leads to an island in the middle of the Bow River, was constructed in 1908 as part of an agreement between the Federal Government and the City of Calgary. Since the age of the bridge began to become a significant logistic challenge, Mammoet were contracted, via Pomerleau/Westpro, to remove the bridge to make way for a replacement.

“Back in 1908, we weren’t really using cars here in Calgary, more horse and buggy,” says Katherine Hikita, project manager with the City of Calgary. “It was a fairly narrow carriage way, a 2.6-metre wide lane. We had a 4.5-tonne restriction on the bridge for a number of decades. Physical condition is really what was dictating it from an asset management point of view.”

In 2012, the 120-tonne bridge was identified in future planning reports for replacement, due to issues including a significant amount of rust, lost side view mirrors on cars due to the narrowness of the lane and flood concerns. Following a 2013 flood, there was an interest in replacing the bridge with one that would be better suited to help deal with flooding.

Hikita says that they knew during the design phase that the removal of the bridge would be complicated by its size, its lead paint coating and concerns about the condition of the foundation.

“The wind proved to be a challenge and delayed the lift until conditions improved,” says Mammoet crane supervisor Chad Hendry. “With the deteriorated condition of the bridge there was some uncertainty with its structural integrity.”

After the wind delay, Mammoet utilized a Liebherr LR1350 crawler crane to perform the lift, which was chosen primarily due to scheduling concerns. Hendry says they had access to a number of cranes that could have performed the work, but the LR1350 made the most sense for scheduling. The lift and setting of the bridge took approximately one hour.

“A small jetty was installed by Pomerleau in order to assist in the positioning of the crane for the placement of the new bridge and the removal of the old bridge,” adds Hendry.

“Westpro – a division of Pomerleau – is very proud to have carried out this project as the prime contractor,” says Bryan Buis, project director with Westpro. “Overall, we are excited to be working on more and more projects such as the 12th Street S.E. Bridge replacement project, all of which are contributing to our continued growth in civil works and infrastructure coast to coast.”

Hikita says that some elements from the old bridge were salvaged; including portals from either end of the bridge. Those elements have had their lead paint stripped and the intention is to install them into the landscape to help commemorate the old bridge.

“We had a lot of interest in the bridge,” says Hikita. “We actually held a farewell party for the bridge before we took it down and we had at least 200 spectators sitting on the banks to watch the bridge removal.”

Construction on the replacement bridge has nearly been completed – as of press time, workers were finishing off the deck and prepping it for waterproofing. It is expected to open this fall.