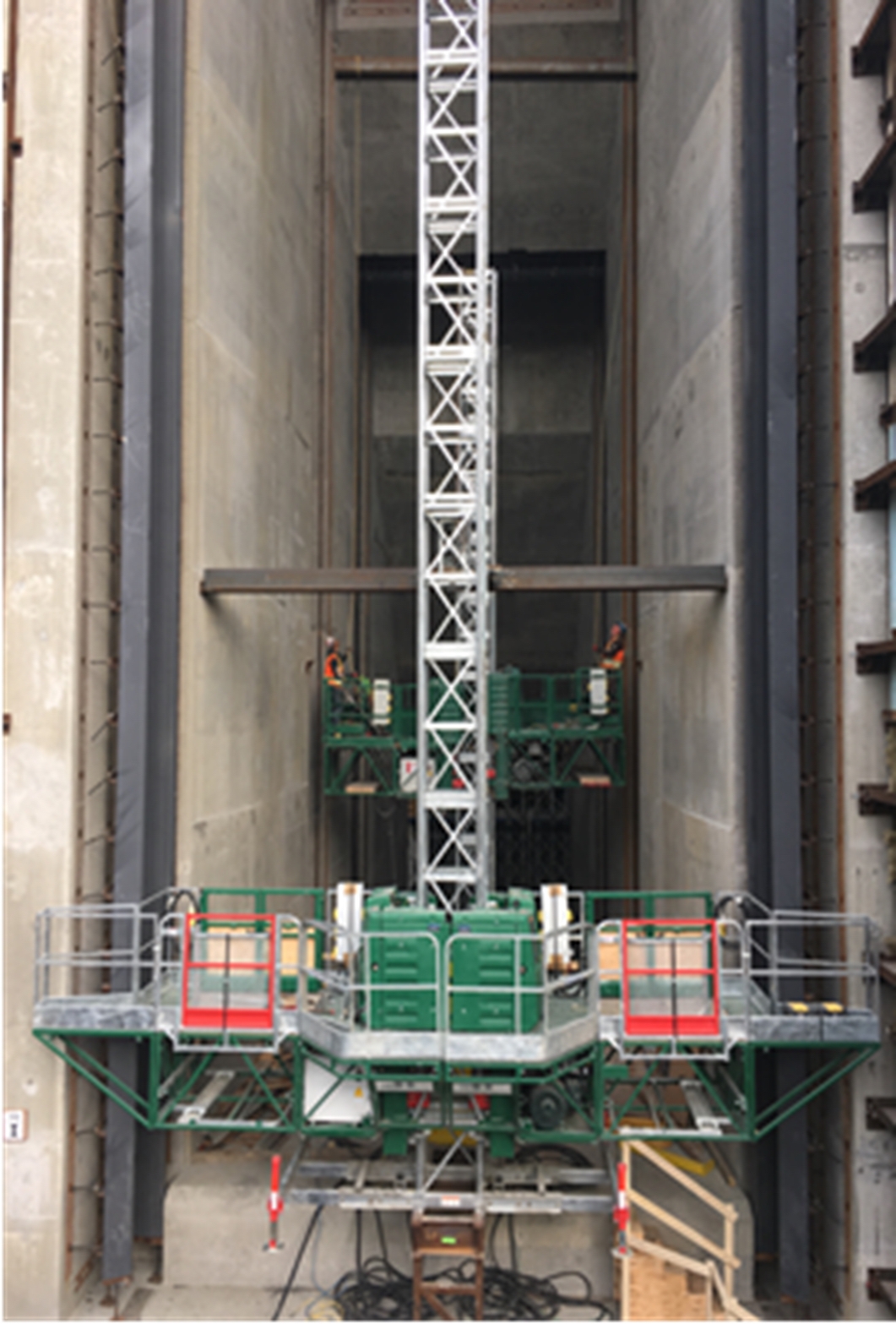 Like many megaprojects, construction of the Muskrat Falls Generation Facility on the Lower Churchill River in Labrador has faced its share of challenges.

When shovels hit the ground in 2013, completion was anticipated by 2017 at a cost of roughly $7.4 billion. The proponent, Nalcor Energy, now projects work to continue into 2019 with the price tag revised to $12.7 billion. A concrete formwork collapse and crane tip-over have also occurred, and concerns have been raised about flooding and methyl-mercury pollution in waterways. In September, Premier Dwight Ball ordered a public inquiry, calling Muskrat Falls “the greatest fiscal mistake in Newfoundland and Labrador’s history.”

While the various challenges get sorted out, construction continues apace, and a series of custom-designed electrically operated lifting platforms are helping workers reach the enormous exterior of the dam’s 47-metre-tall powerhouse, considered to be the literal heart of the project.

Canmec-CRT, a joint-venture between the Canmec Group and CRT Construction that was created to oversee construction of some of the dam’s major components, purchased a dozen of the platforms in 2014 to provide close-up access to sections of the concrete spillway structures. The contractor has now moved these platforms to the powerhouse gates and brought in nine additional ones.

Essentially, the platforms replace conventional scaffolding as well as the need to use cranes to get workers and materials where they need to go. The key, says Alex Di Domenico, AGF’s vice-president of major projects, is that the platforms each have two independent bridges that can move up and down, much like twin elevators.

“More and more nowadays you’ll see work platforms which have the ability to move up or down, to transport material and allow workers to access the facade,” Di Domenico says.

Di Domenico says the company has supplied platforms for a wide variety of construction jobs, from the Champlain Bridge in Montréal to the World Trade Center reconstruction in New York City following 9/11.

The technology is based on a drive system that can be either gas or electrically powered. In this case, electricity is supplied by generators.

The platforms, designed for projects generally exceeding 100 feet in height, essentially consist of bridge-like sections bolted together. The two independent sections can travel up or down on a single mast at speeds of up to 38 feet a minute. Combined, they can support up to 12,000 lb.

The mast itself can consist of either a gear rack system or a ratchet-and-rung-type system. For ratchet-and-rung, imagine climbing a ladder one foot and one hand at a time. “It’s kind of a similar technology,” Di Domenico says. “We’re using lifting hooks that climb the mast tower. In the case of Muskrat Falls we used a mast tower consisting of a rack-and-pinion drive system with electrical motors driving the entire platform up and down.”

“In the past, general and specialty contractors used standard scaffolding for dam construction,” Di Domenico says. “Depending on the environment and application, scaffolding can be a very inefficient option because it’s time consuming to erect and dismantle and needs to be built up in phases following each construction step.”

The up-and-down movement of the platforms simplifies the overall operation and increases efficiency, while their modular design enables them to be easily moved to different parts of the project — as when the dozen units were relocated from the spillway to the powerhouse — or even reassembled for other projects elsewhere.

“The mast tower consists of five-foot section pieces that are bolted together and can be erected in 20-foot segments,” Di Domenico says. “Once the base core unit is in place we can erect the work platform mast tower by its own system without relying on an independent mobile device.”

While scaffolding could be used at a site like Muskrat Falls, Di Domenico says choosing between the different options comes down to cost efficiency and site requirements.

“Each job site would be analyzed to determine which access solution is best suited,” he adds.

Louis-Phillipe Robillard, marketing manager with AGF, said the company signed a non-disclosure agreement that doesn’t allow it to disclose contractual details. But, depending on their configuration, standard platforms without customization can range between $20,000 and $150,000. Further customization is on a case-by-case basis.

“Service, installation and training are a big part of such projects,” Robillard said. “We have different types of units — we even have one you can carry on the back of a pickup truck. That, for sure, is a very more affordable unit. But a project of this scale is using the cream of the crop.”

The powerhouse is the last major component required for creating the final Muskrat Falls reservoir. Some of the project’s biggest cranes, including two 340-tonne overhead machines capable of making a tandem lift of 650 tonnes, have also seen duty at the powerhouse.

Once in operation, the 824-megawatt facility is expected to become the second largest hydro plant in Atlantic Canada.