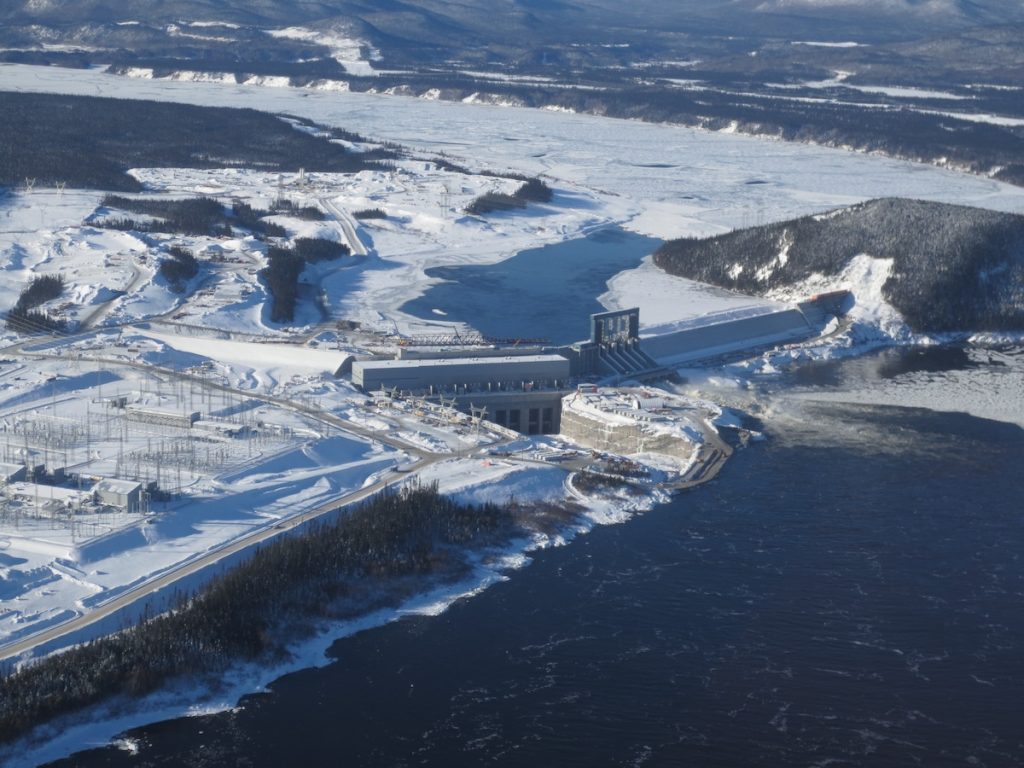 Two bridge cranes, working in tandem to hoist 800 metric tonnes during a load test at Nalcor Energy’s Muskrat Falls generation facility on the lower Churchill River in Labrador this past summer, showed that a little cooperation can go a long way.

The 84-metre-tall powerhouse includes four turbine/generator units and, together with the spillway and dams, will form the nucleus of the generating facility, spanning the lower Churchill River at Muskrat Falls to create the reservoir and power the plant.

The iCrane division custom-builds bridge and gantry cranes and other hoists for a range of hydroelectric infrastructure that also includes spillways and intake gates.

The two bridge cranes will have their work cut out for them at the project site. Working from rails attached to the columns inside the powerhouse structure, they will be used to help put the turbines and other powerhouse components into place. Then, in the years ahead, the cranes will assist with ongoing maintenance and periodic system overhauls.

Gauthier said the project required considerable planning and engineering, and placing the cranes underneath the ceiling proved particularly challenging.

A hole was left in the powerhouse roof so the larger mobile crane’s boom could extend beyond ceiling height. “That way we had enough lift-height capacity,” Gauthier explained.

The first crane was installed and commissioned in early 2017 and the second one followed this past summer. Commissioning consisted of basic tests and fine tuning done immediately following their reassembly on-site to ensure basic functionality of electrical and computerized components.

With these initial tests completed, the cranes were ready for their load test. The project team determined the bridge cranes need to be able to hoist up to 650 tonnes, in tandem, and Groupe LAR engineers produced the needed calculations and drawings.

While load tests are routine, specified under the Canadian Standards Association, they’re normally done one crane at a time. This time, the project team decided to also test the cranes in tandem. “For us, to test the lifting beam was a first. It’s not common to test with the lifting beam,” Gauthier said.

To provide the needed performance assurance and meet safety standards, the project team looked to hoist a mandated minimum 125 per cent of the targeted 650 tonnes and settled on 812.5 tonnes.

Work crews connected their custom-made lifting beam to the tandem lifting beam of the two cranes and performed an initial test, at 100 per cent, using 34 concrete blocks for a total 650 tonnes.

With the load tests completed, the bridge cranes are now in the hands of the project team and contractors. Each crane includes a main hoist and an auxiliary one, with each main hoist capable of lifting 340 tonnes and the smaller ones able to lift up to 25 tonnes. The smaller hoists are meant for smaller, more routine jobs, to boost efficiency. “It’s to handle lighter loads and to move them faster,” Gauthier explained.

Gauthier wasn’t at liberty to disclose the cost of the bridge crane used at Muskrat Falls but said tandem bridge crane packages tend to cost roughly $12 million, including engineering and load test services and customer training.

“The load testing of the two cranes in tandem was a significant achievement,” said Scott O’Brien, the project manager for Muskrat Falls generation. “A fully operational powerhouse overhead crane system is a critical asset in the delivery and maintenance of the Lower Churchill Project’s turbine and generator sets.”

With first power expected this year and full power scheduled for 2020, Nalcor’s Muskrat Falls generation facility stands to be the second largest hydro plant in Atlantic Canada. The current facilities capital cost estimate for the generation and transmission components of the project is $10.1 billion, with financing and other costs bringing it to $12.7 billion.

Groupe LAR has supplied iCrane systems to a range of customers. Hydro-Québec purchased 300 and 325-tonne systems for its Romaine I and II hydroelectric projects a half decade ago. Groupe LAR also supplied bridge cranes to an aluminum smelter in Qatar.