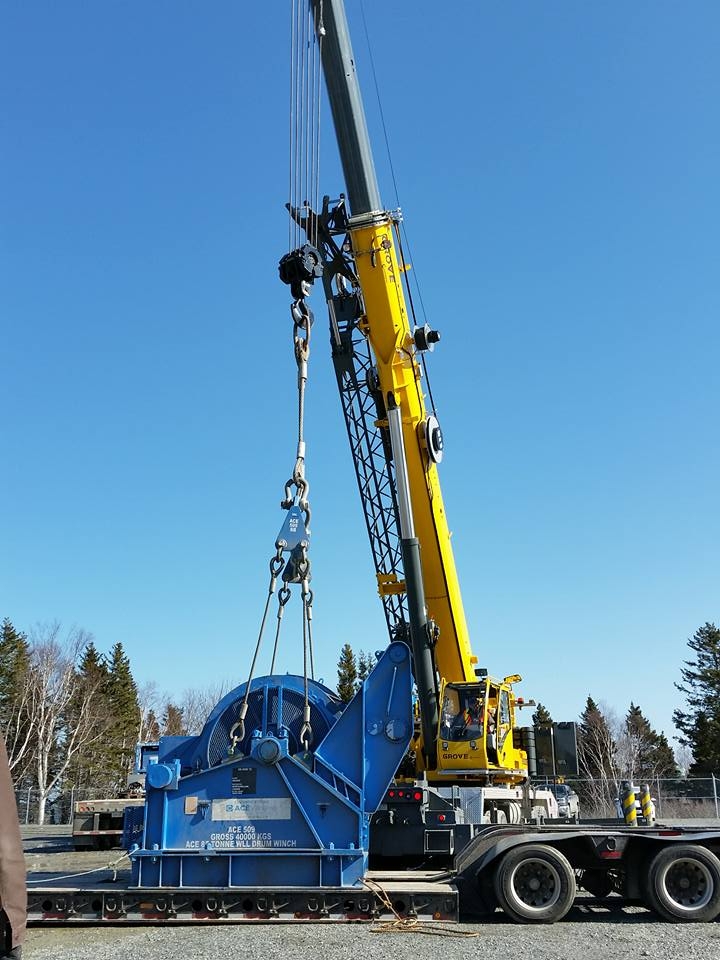 A Nova Scotia First Nation band and a metal fabrication company have collaborated on a new crane service; which has already begun performing lifts in the area. Mi’kmaq Crane Services Inc. is the result of collaboration between the Eskasoni First Nation Corporate division and East Coast Metal Fabrication (ECMF).

Steve Parsons, general manager for Eskasoni Corporate, says one of their mandates is to identify employable opportunities for band members.

“Three and a half years ago, we sent six guys from Eskasoni to do the formal training for cranes,” Parsons says. “Since then, we’ve had four of the individuals working for other companies and our thought was that if we could find a partner, that we would certainly look at creating a joint venture whereby we would not only be able to provide an opportunity for band members to work in that sector, but also to create a revenue stream.”

Eskasoni Corporate had an existing relationship with ECMF – several band members had trained with the company in metal fabrication and two were still working there. A formal partnership soon followed, with the First Nations community owning 51 per cent of the business.

“It brings a lot of benefits to us in so many ways, since we’re dealing with steel and steel erection on a day-to-day basis,” says Sam Hines, safety coordinator and administrative assistant for ECMF. “We do a lot of subcontracting of cranes. We don’t mind subcontracting the work, but to be able to do it ourselves with our own employees and our own cranes is quite a benefit to us.”

Parsons says the company aims to be versatile, and able to supply any need for cranes in the industry. The company has 110-ton cranes and a couple of boom trucks, and has already utilized them on a variety of projects. The company helped Marine Atlantic replace the bumpers on their wharves in North Sydney and erected the steel for an ice rink at the Membertou First Nation in Sydney, N.S. They have also performed work for Nova Scotia Power and the Donkin Mine.

“So we have some major corporate entities as customers,” Parsons says. “But we’re also prepared to serve anybody that requires a boom truck. We’re open for business and giving quotes every day for services. We’re picking away at it in the local area, and I think we’ll be successful moving forward.”

As they continue to operate, Mi’kmaq Crane Services are learning what balances they need to strike for maximum effectiveness. Crane work by its nature is not cheap; however a young company also needs to be competitively priced. And working around the scheduling demands of your customers can be challenging.

“Some companies that we deal with require crane turnaround in 24 or 48 hours, so we need to be able to meet the demands and supply the capacity for each and all jobs,” Parsons says. “Sometimes you need to provide it today. Service is key and our mandate is to provide good quality service at a reasonable price.”

This is Eskasoni Corporate’s second attempt at launching a crane company. In 2014, Memski Projects (a collaboration between the Eskasoni and Membertou bands) signed an agreement with Scotia Crane Rentals to form a new crane service. However, Scotia Crane Rentals went out of business in 2016. With Mi’kmaq Crane Services already moving forward with some significant clients, however, Parsons is hopeful for their future.

“We are a new company but we’ve got experienced operators on our cranes and our general manager is well-rounded with over 30 years of experience in the crane industry,” he says. “All we want is a fighting chance to quote jobs. And given the opportunity to quote the jobs, we feel that we can be very competitive in nature of pricing and provide above and beyond expectation when it comes to delivery of service.”