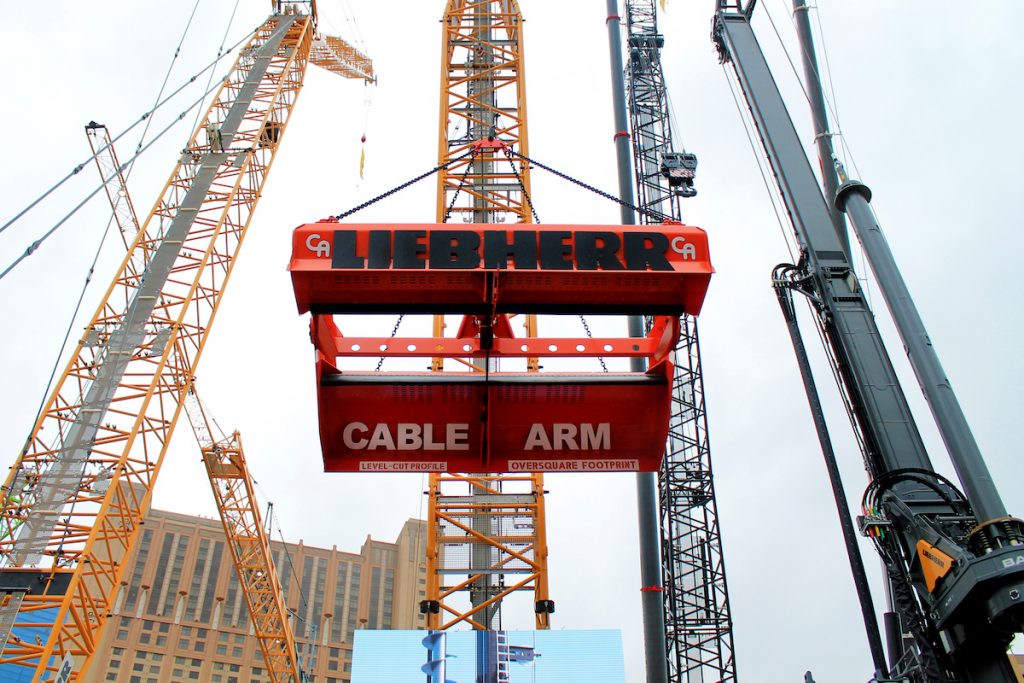 Andreas Böhm and Peter Mayr started CONEXPO/CON-AGG off with updates from the company and information on its latest cranes and tech innovations announced at the show.

“There are all kinds of wonderful things to see and do at CONEXPO, so we’re grateful you chose to stop by our stand,” said Böhm.

Böhm said 2019 was a successful year financially for the company.

“Overall turnover of over 11 billion Euro was a new record for the company, making it our third record year in a row,” he said. “Compared with the previous year, we enjoyed a double-digit increase in turnover. These figures are quite impressive as the International Monetary Fund’s research showed global economic growth slowed to 2.9 per cent in 2019.”

Another area of growth was Liebherr’s headcount. The company created 3,000 new jobs over the financial year, bringing the total number of Liebherr employees to 48,000 worldwide.

Böhm stated the company is looking forward to another positive year.

“We’re expecting stable to slightly positive sales development in 2020. The international Monetary Fund has forecasted economic growth to ride 3.3 per cent, with growth in emerging and developing countries expected to increase to 4.4 per cent. This bodes well for our continued focus on modernizing company locations and intensifying the Group’s global market presence,” he said.

“The earthmoving equipment and material handling product area is an important one for Liebherr USA,” said Mayr. “We have increased out footprint, just covering a few states on the east coast to almost one hundred per cent coverage today. We hope to continue to expand I 2020 with the equipment and innovations we are presenting today.”

Here are some of new cranes and tech announced at the show: 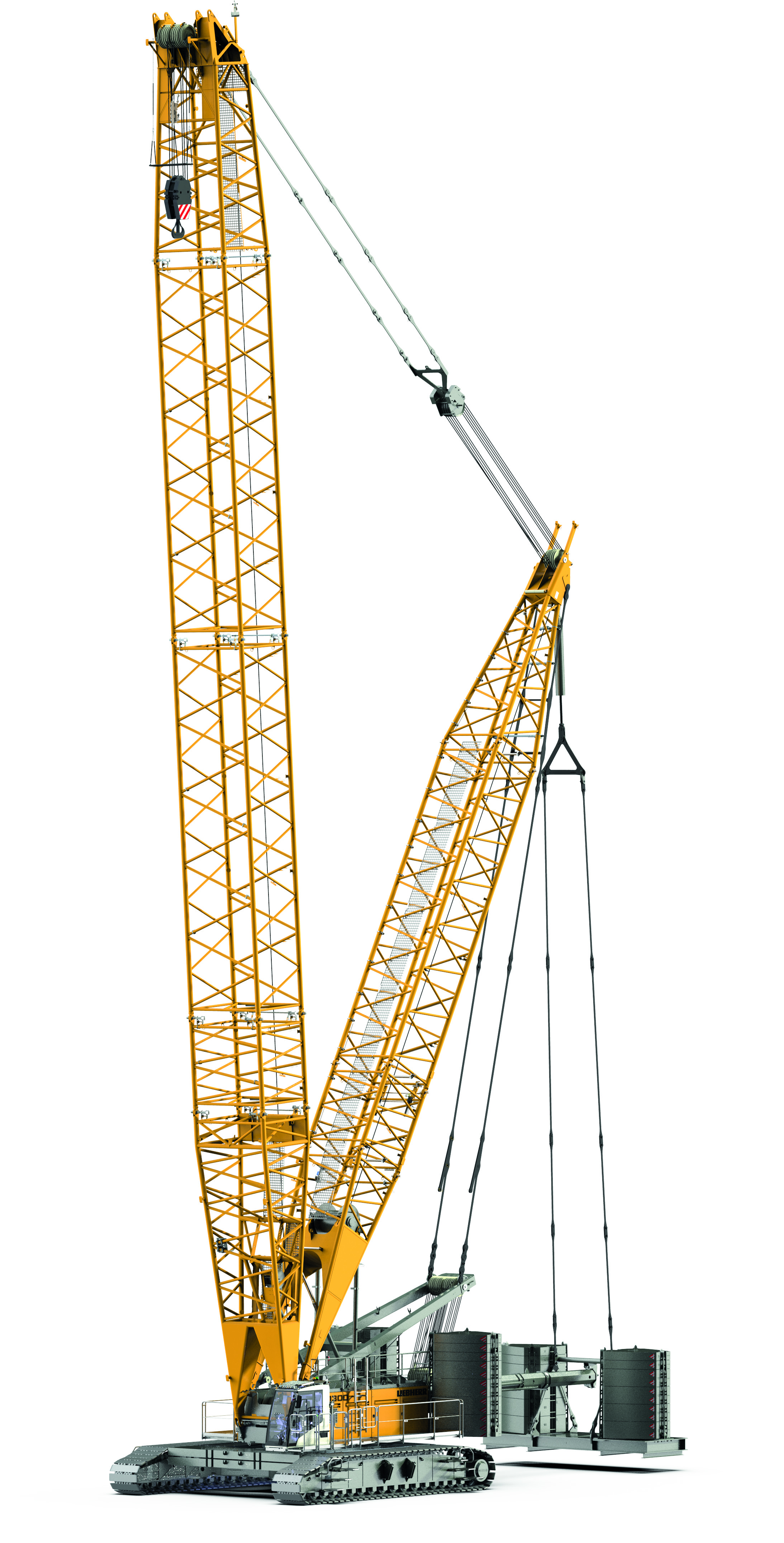 The LR 1300 SX, which belongs to the newest generation, has a lifting capacity of 661,387 lbs (300 t). For heavy loads, the crane can be fitted with a derrick boom in combination with an additional counterweight. The new suspended counterweight of the LR 1300 SX no longer has a fixed counterweight radius and instead can simply be hydraulically displaced.

Crane operation can be demanding during lifting jobs – even when the hook is empty! If the centre of gravity of the crane is too far forward, there is a risk that the crane can tip when lowering the boom and jib. The Liebherr assistance system “Boom Up-and-Down Aid” indicates the approach to the tipping border and automatically stops operation before the operator unintentionally enters an unsafe zone. It assists the operator in leaving the danger zone without having to activate the safety bypass switch. The new Liebherr LR 1300 SX is fitted with wind sensors on the main boom and jib. 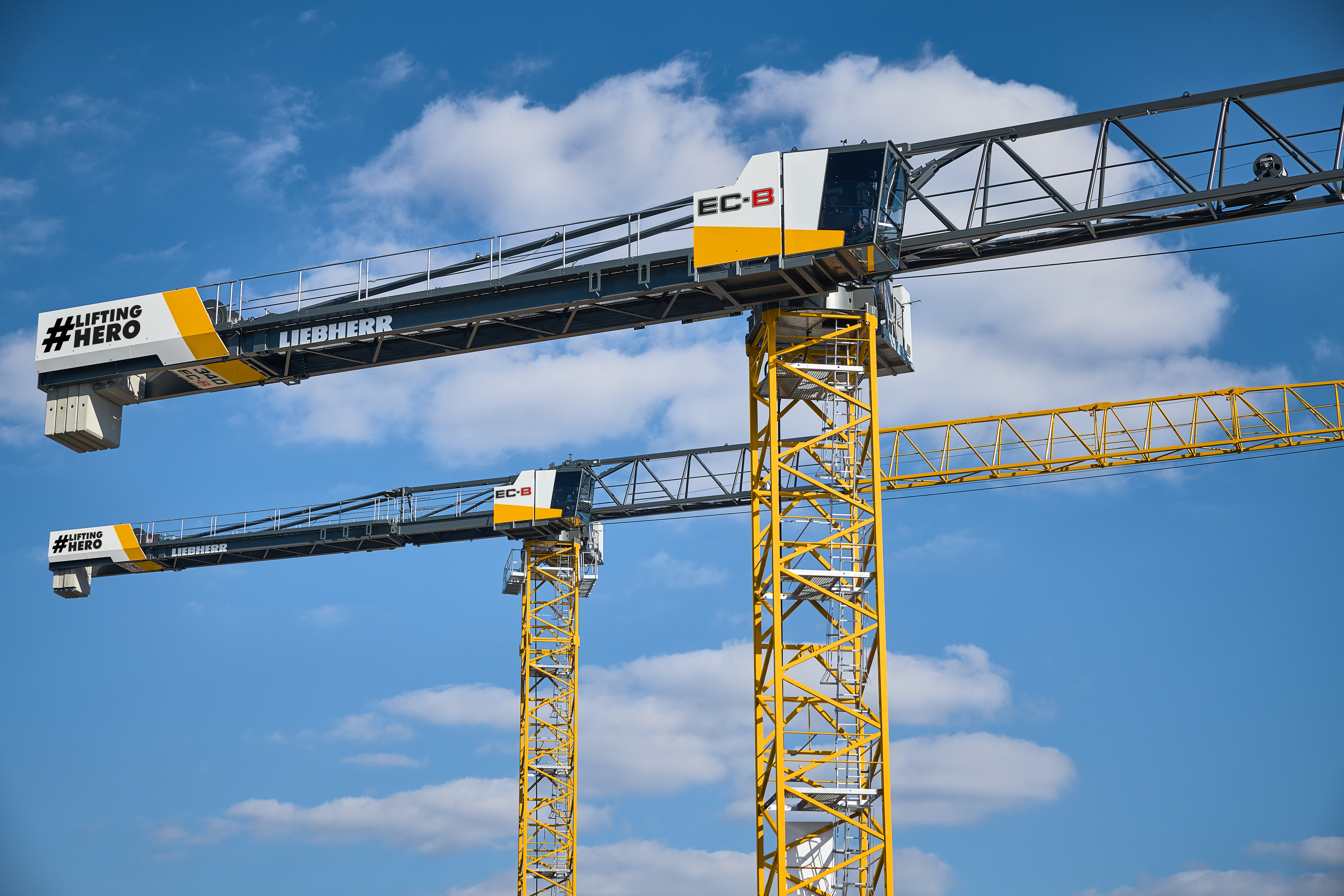 Liebherr presented the 340 EC-B of its newest Flat-Top series. Three of the eight units are equipped with fibre rope and therefore have ‘fibre’ added to their product title. Fibre rope’s service life is four times longer than steel rope and it enables fibre cranes to work with a significantly higher load capacity. In addition, handling is noticeably easier compared to steel rope.

When developing the new series, Liebherr also focused on the comfort of crane operators and safety on the construction site. The new LiCAB cabin is significantly larger and has a greater field of vision. In addition, the new top-slewing cranes have a new, central control element: a multi-touch display. Integrated advertising panels are part of the new design and offer improved promotional visibility.

125 K: the largest fast-erecting crane in its class 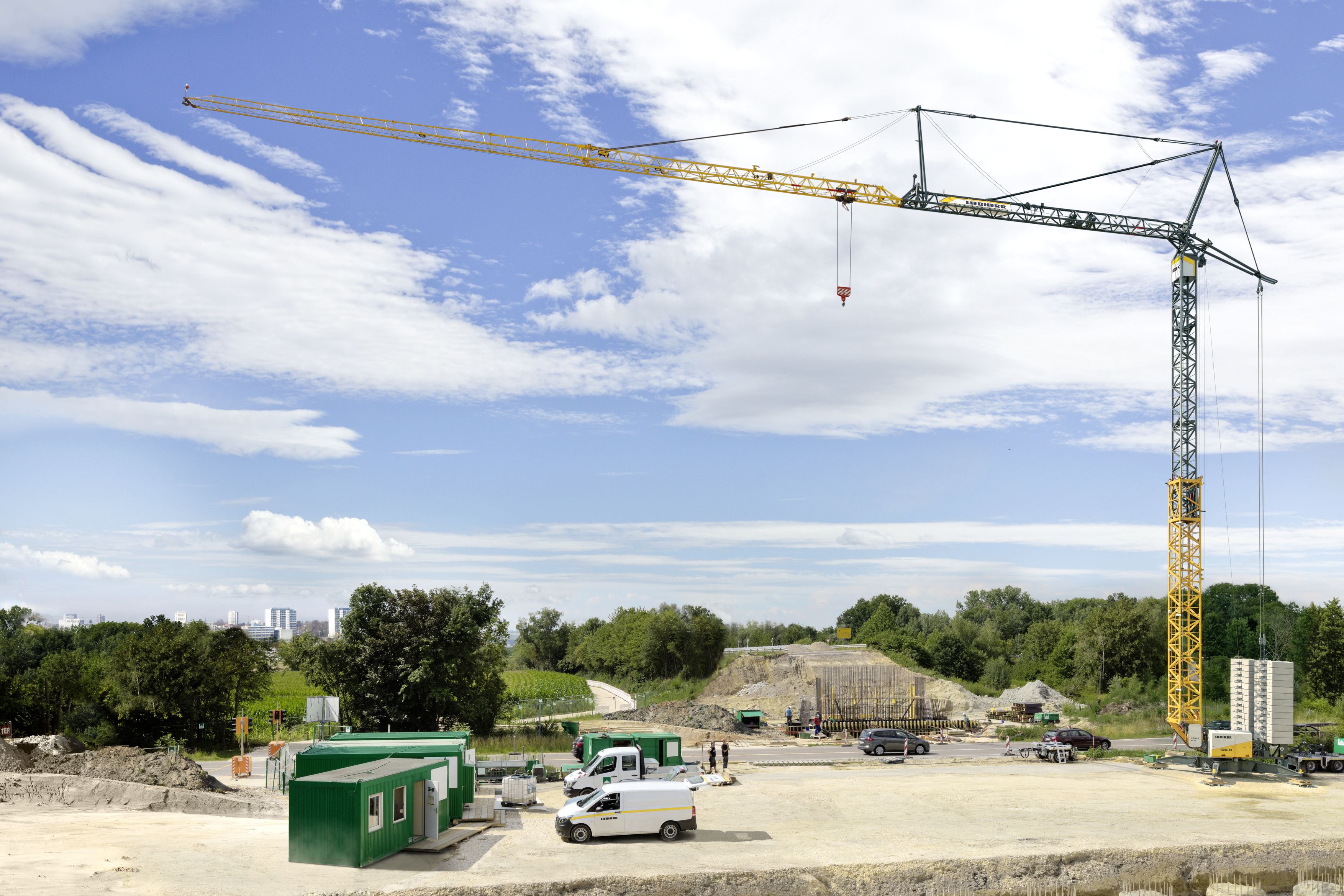 The new 125 K has been specially developed for civil engineering requirements such as road traffic bridges and commercial as well as industrial building construction. In this field, high load capacities and large radii are required for projects with limited lead times.

The 125 K has a considerable initial hook height of 29.5 metres as standard. Five tower sections can be additionally inserted to reach a total hook height of 41.5 metres. This means that even major construction projects can be mastered. If the hook height still isn’t sufficient, the 30-degree luffed jib position enables an impressive 65.5 metre hook height. The Liebherr crane has an 8,000 kg maximum load capacity and with a 55-metre radius at the jib head, it is able to lift 1,300 kg thanks to its Load-Plus function. Its immense flexibility is also demonstrated by its five radius options, ranging from 35 to 55 metres. 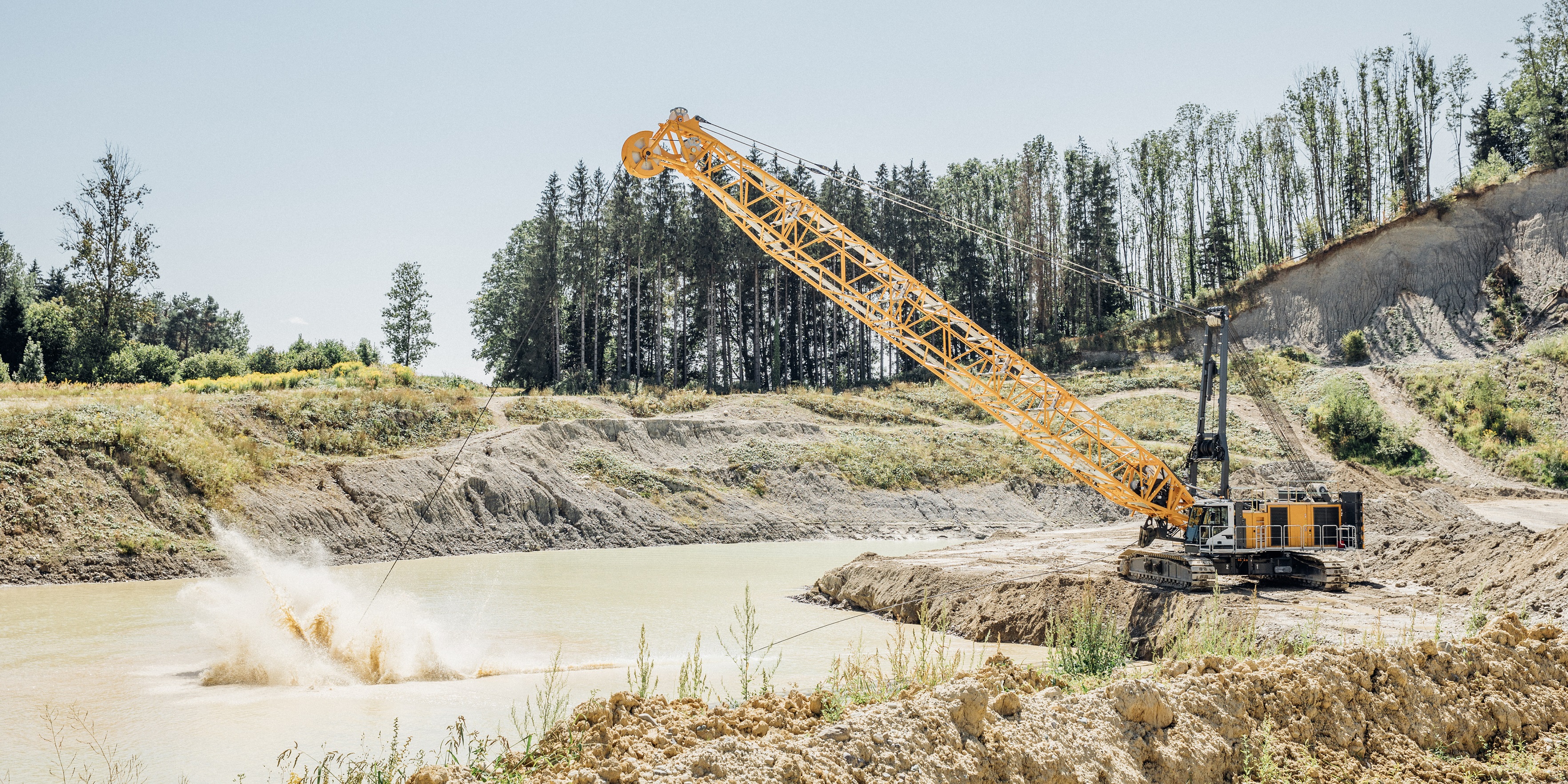 The HS 8200 is one of the innovations in the HS series. The design of the duty cycle crawler crane is based on its predecessor, the proven HS 895 HD, but boasts an even better performance capacity. The elegant design combines safety, performance and economy, as well as a high level of operator comfort.

The HS 8200 is the new Liebherr duty cycle crawler crane in the 200-tonne (440,925 lbs) category. Thanks to the newly designed drive system, the performance is increased by 15 per cent. Load capacities are also increased by up to 15 per cent.