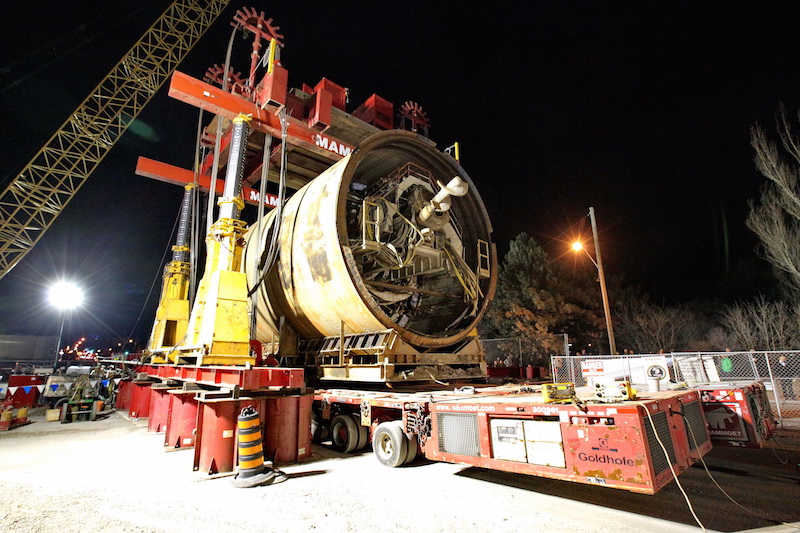 Toronto is Canada’s biggest city but has just one citywide east-west rapid transit line, the Bloor-Danforth subway, and that’s located on the north edge of the large downtown core.

An attempt to build a second east-west subway line along Sheppard Avenue was derailed 15 years ago with just a handful of stations east of Yonge Street. However, a new light-rail line currently being built along Eglinton Avenue, roughly halfway between Bloor-Danforth and Sheppard, stands to add a second east-west route for people wanting to avoid the city’s cumbersome network of buses.

The 19-kilometre, $5.3-billion Eglinton Crosstown light rapid transit line, scheduled to open in 2021, had crews using tunnel boring machines to dig two adjacent tunnels for trains running in opposite directions. One pair of machines worked from Black Creek Drive in the west end to Yonge in the city centre, while a second pair dug east-end tunnels from Laird Drive over to Yonge.

The machines, each seven metres in diameter and weighing 430 tonnes, were assembled on site where their drilling was to begin. However, project planners deemed it too risky to have the two west-end machines digging too close to the existing north-south Spadina subway line.

“They weren’t able to dig directly underneath the (Spadina) line because they were worried about the vibrations of the machines,” explained Kyle Hannah, an account manager with Mammoet. “Rather than dismantling them, which would be a very long and labour-intensive process, they decided to ‘jump’ the line and came to us for a solution to lift them out at one side of the existing tunnel and then put them back in on the other side.”

In the week leading up to the manoeuvre, crews opened two large square shafts on the north side of Eglinton Avenue, one on each side of the University-Spadina line, and placed a series of large beams to accommodate the gantries.

The manoeuvre itself began on the Friday night. After attaching 300-ton strand jacks to the gantries, crews rolled the first gantry into position over-top one of the tunnel boring machines and used rigging to attach it to the gantry and strand jacks.

“They hoisted it up about 60 feet to the surface level,” Hannah said, describing the gantry’s four-point lift. “Then they slid the gantry forward so that it was over-top the street where we could set the tunnel boring machine down on a hydraulic trailer.”

Crews then moved the second machine in a mirror image of the first lift. “It was basically the same operation twice in one weekend,” Hannah said.

The two machines then resumed their lengthy trek, reaching Yonge Street this past June.

While the job was relatively straight-forward, there were some challenges.

As with many urban jobs, space was tight. Crews closed Eglinton Avenue to traffic for the duration of the weekend hoisting but maintained one lane in each direction while building the shafts and setting up and dismantling the gantries.

“The limits for where we could work were fairly stringent,” Hannah said. “The delivery and assembly schedule had to be timed because we had 20 to 25 truckloads of material coming in for the job, and we couldn’t have 25 trucks lined up on Eglinton waiting to be offloaded. So we had to work with our client to have suitable staging areas and things like that.”

The lift also enjoyed a relatively high profile. “Everyone in the neighbourhood wanted to come out and see what was happening,” Hannah said. Metrolinx, the provincial government agency responsible for the project, cordoned off an area on each side of the street and even set up viewing stands so spectators could watch from a safe distance.

The high visibility and tight schedule made it imperative that the job go smoothly. “We only had one weekend to do it, so everything had to go according to plan, and it did,” Hannah said. “Everyone did a great job.”

As well, the construction consortium, Crosstown Transit Constructors, wanted to keep the western shaft as narrow as possible in order to maintain traffic flow, because the Allen Expressway’s southernmost offramp spills onto Eglinton Avenue at that same juncture. Mammoet used extra-large beams to bear the weight of the gantry and tunnel boring machine without requiring a wider shaft to allow space for vertical support pillars.

Then, when Crosstown expressed concern about the heavy trailer load crossing over-top of the subway line and requested extra reinforcement, Mammoet designed a ramp system. “We used some of the ramps we’d designed primarily for barge offloading and similar types of operations to ramp over that section of the (subway) tunnel,” Hannah said.

In the end, crews completed the two lifts by Sunday morning, roughly 12 hours ahead of schedule.

“It went very smoothly given the size of the machines and the complexity of the job,” said Jamie Robinson, who oversees community relations and communications for rapid transit projects for Metrolinx.

“We spent months planning this move. I’ve been down in the tunnels a number of times, but to see them actually hoist the machines out of the pit and see them standing there being held by a crane and then being manoeuvred onto the flatbed and lowered into the extraction shaft — it was truly remarkable.”