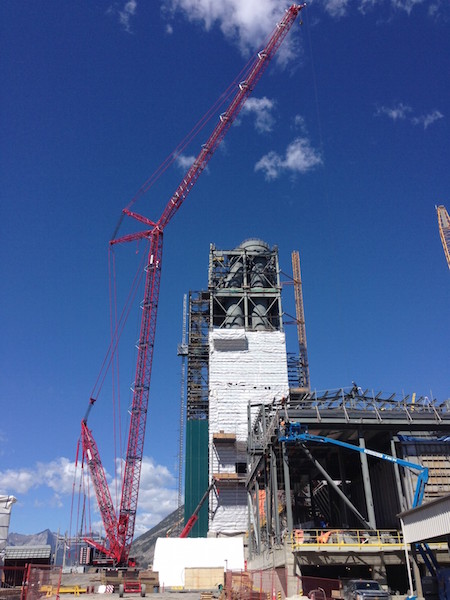 Jackknifing a crawler crane is standard procedure in high winds. Mammoet says its wind protocol for crawler cranes is for the crawler boom or boom/jib combination to be laid down

What’s a crane operator to do when winds exceed hurricane speeds at a mostly outdoor job site?

At an expansion of Lafarge Canada’s Exshaw cement production plant in the heart of the Rockies just east of Canmore, Alberta, the answer was clear — shut down and wait for conditions to improve.

The plant dates back to 1906, and project planners set out to modernize the facility and boost manufacturing capacity by 60 per cent.

Cranes were front-and-centre to the project, which was completed last year. While a cornerstone of the work involved replacing aging cement kiln technology with a more modern, efficient system, there were also numerous heavy lifts.

The main duties for the SL3800 included lifting heavy structural steel for construction of the expansion and also the installation of a new zero-discharge water-cooling system.

For most of the time, the SL3800 worked in fairly close proximity to a tower crane operated separately, so precautions were needed to avoid any mishaps.

“When we would swing in, we would let the tower crane operator know,” Adam says. “We were in constant communication so he wouldn’t swing into us, or vice-versa.”

“The plant is in a bowl in the surrounding mountains, which acts like a wind tunnel funnelling the wind,” Adam says. “We planned for the risk with a spare super-lift tray but we didn’t expect the winds to be so brutal. Gusts were in excess of hurricane forces, upwards of 110 kilometres per hour.”

A super-lift is a heavy lift attachment that can carry more counterweight, increasing the capacity of the crane.

Asked how such strong winds might affect crane operation, Adam was blunt. “Work is halted. We just don’t lift. Our crew gets the crane to the ground as safely and quickly as possible.”

“We knew what was coming at us at all times,” Adam says, adding that winds were tricky and would seemingly come out of nowhere, funnelling through the mountains and gaining speed.

While Mammoet bid the job with only one super-lift tray, the company ended up supplying a spare to ensure a quick, agile response when needed.

“This eliminated us having to load up our tray with 150 tonnes each time we had to bring the boom down,” Adam says. “We could cut loose, get into our spare tray, and get the crane down to the ground promptly.”

Mammoet is no stranger to wind. The company has experience working on wind farms, and some of the same factors applied to the Exshaw job.

When winds became an issue, crews would jackknife the crawler and bring the jib to the ground to wait things out.

Adam describes one particularly blustery day where wind speeds exceeded 150 kilometres an hour. “We didn’t have room to lay the crane down (completely) flat, so we laid it down as flat as we could get it.”

Crews only boomed down that way one time. Adam says he received clearance from a Terex representative to do so and also immediately reported the manoeuvre to managers on-site.

“We have wind protocol for our cranes and they all have wind speed indicators fixed to the boom, but for this project it was important for me to be in regular contact with the crane’s manufacturer.”

The key to safety was keeping everyone fully informed. “It was a team effort,” Adam says. “In spite of the wind, we had zero lost-time incidents.”

For all their ferocity, the gusts did have their silver lining.