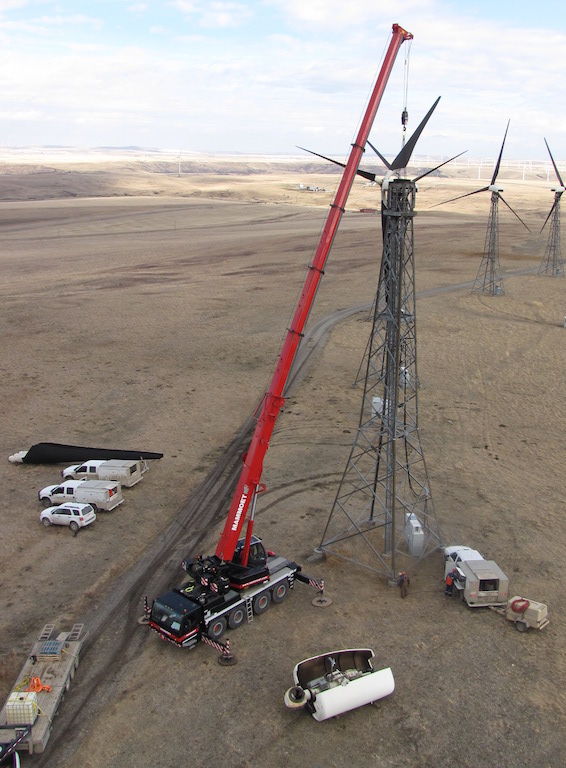 Whether they’re going up or coming down, wind turbines provide work for Canada’s crane industry.

“All of them are decommissioned,” Tyler Hannah, operations manager for Mammoet Canada Western, told Crane & Hoist Canada in September.

The company dispatched a 70-tonne capacity all-terrain Liebherr LTM 1070 to start the job and finished off with a 90-tonne Lieherr LTM 1090.

The Cowley Ridge wind farm began generating electricity in 1993, according to a news release from TransAlta Corporation, which owns and operates the

facility. At its peak, the renewable capacity for the site’s 57 turbines was rated at 16 megawatts.

“Planning for the end of life of a wind site is a fairly new process,” said Stephen Young, wind and solar operations manager for TransAlta.

“The Pincher Creek team has done an amazing job of getting the maximum life from the site and helping plan for transition. We have an incredible and talented group of technicians, administrators and leaders here who take great pride in what they do,” Young added.

A short video on TransAlta’s website shows a crane lowering a 2,000-pound blade roughly 75-feet to the ground. The operation takes less than a minute but the setup time was far longer.

The 375-kilowatt turbines built by Kenetech Corporation were mounted on 24.5-metre lattice towers and operated during wind speeds of up to 97 kilometres an hour, according to TransAlta.

“They’re a very small machine,” Mammoet’s Hannah said of the turbines. “So the process for us was we pulled each of the blades individually, and then we took down the nacelle as a complete assembly, and then we essentially brought down the steel lattice tower in one lift.”

The decommissioning of the turbines took longer than expected due to windy conditions.

“The wind has to be below 25 kilometres an hour for us to proceed with the disassembly,” said Wayne Oliver, TransAlta site supervisor. “Once dissembled, the bulk of the turbine can be recycled. We separate the metal from the non-recyclables and we anticipate we can recycle in excess of a million pounds of metal.”

Hannah agreed that the biggest challenge for Mammoet was dealing with the elements. That made sense considering that the site for the wind farm was chosen because of its strong winds. He credited TransAlta’s personnel, who provided rigging and technical expertise, with working with Mammoet’s crane operator to capitalize on the wind windows as they opened up.

“As with anything, your first few units are a bit of a process of discovery,” Hannah said. “And then you find your rhythm, you find your groove.”

It wasn’t simply a matter of reversing the installation process, either. These older turbines differ in many ways from new models. With newer turbines, the blades are usually pitched flat during installation or de-installation.

“So think of it like an aircraft wing — it doesn’t catch a whole of that wind,” Hannah said of a newer turbine blade.

The older Kenetech blades, however, were designed to catch the wind, which made removing them tricky.

“We and TransAlta had to for sure be on our toes so that we were able to fly these blades in an uncommon orientation compared to how we deal with the newer turbines,” Hannah said.

Plans for replacements up in the air

As for the Cowley Ridge wind farm itself, TransAlta’s Oliver said the company is “very interested in repowering the site.” However, he added that the economics of such a venture “depends on the province’s long-term plans for adding renewables to the electrical grid.”

Paul Gipe who writes about and advocates for the renewable energy sector from his home in Bakersfield, Calif., said that while metal parts from the Pincher Creek turbines are to be recycled, decommissioned wind turbines are more likely to be reused. He cited the example of an array of 200-kilowatt turbines that were taken down in Germany and then transported to Northern Ireland where they were refurbished and put back on line.

While there is scrap value in standing turbines, Gipe said it only makes sense to plan ahead for the eventuality of decommissioning. That provides assurance to landowners who don’t want to be saddled with the expense of removal.

“There should always be a provision for turbines to be removed,” Gipe said. “There should be a demolition or removal bond taken out. That’s something I’ve been saying for 30 years.”

Demolition bonds are a regulatory requirement in Europe but not in North America, Gipe said.

Gipe favours wind energy projects that are headed up by landowners and/or by the communities where they’re located. That way all profits are shared locally.

The types of turbines being installed today tend to be taller with more generation capacity and are far more efficient. Gipe says landowners dealing with wind energy companies should familiarize themselves with the industry before signing a contract in order to reap the greatest financial reward.

Opposition to wind turbines is strong in Ontario but that’s not that the case in Europe, Nova Scotia, and other jurisdictions, Gipe said.

“They’ve been very supportive. They’re sad to see the older turbines come down,” she said.

Gipe says wind, solar and other renewable technologies make the most sense in meeting tomorrow’s energy needs because they contribute far less to pollution and global warming. To those worried about higher electricity costs, Gipes says the costs are bound to increase whether or not the new sources are wind turbines or coal-fired plants. All electricity infrastructure is expensive.

The author of seven books about wind energy, Gipe has been active in promoting the industry globally. At one point he served as the acting director of the Ontario Sustainable Energy Association.

A global company headquartered in Calgary, TransAlta has been generating electricity since 1911. The company has invested heavily in renewables, wind, hydro and solar, but also has a large interest in coal and gas-fired plants.