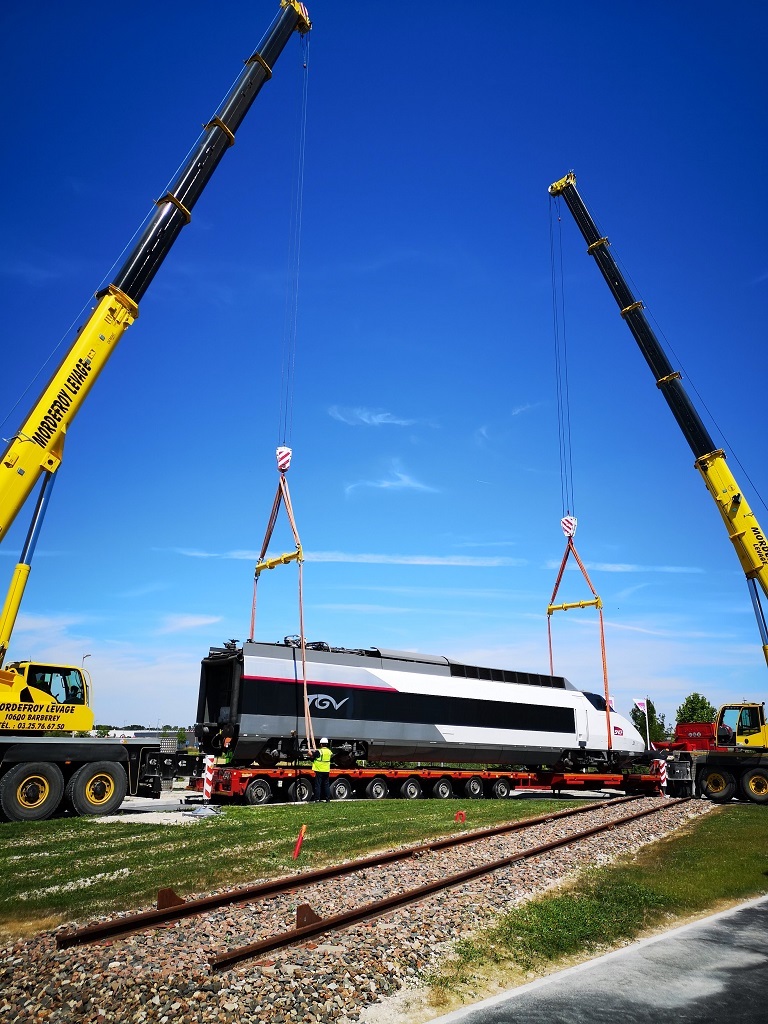 Nov. 28, 2019, Zweibrücken, Germany – Crane service provider Mordefroy Levage used its tried-and-true Demag AC 100-4L and AC 140 duo from its fleet to move a 34-tonne TGV locomotive onto a track at the Technicentre SNCF in Romilly-sur-Seine.

TGVs (Train à Grande Vitesse) are known for a number of things, but the most important of these is their speed. However, precision was far more important than speed for this specific job, as every centimetre counted.

“The two Demag cranes had more than the performance characteristics required for this job, not to mention that they work like a charm together, so it was only natural for us to use them,” General Manager Patrick Mordefroy explains after mentioning that his company performed the lifts on behalf of French railway company SNCF.

In addition, there was another advantage behind the two Demag cranes that became readily apparent during their trip to the work site: Everything that the two cranes needed for the tandem lift fit on one single transportation truck, meaning that on-site setup was completed very quickly – in fact, it only took the three-person Mordefroy team one hour to get it done.

Tight space conditions
When loading the locomotive onto a lowbed trailer, the Mordefroy team was lucky to be working with ideal conditions and ample space. That changed entirely when unloading the locomotive at the new Technicentre SNCF in Romilly-sur-Seine, however, as the space conditions there were much tighter. However, the team’s experience and the cranes’ compact design made it possible to easily overcome this challenge. In order to prepare for the lift, the 34-tonne, 22-metre-long locomotive was first positioned parallel to the track with the lowbed trailer and was then slung at the front and rear with spreader beams in order to provide the required controllability during the lift.

Precision work
The Demag AC 100-4L picked up the front of the locomotive with its hook at a radius of 13 metres so that it had to handle a total weight of 16 tonnes, while the Demag AC 140 worked at a radius of 14 metres and took care of the remaining 18 tonnes. With this configuration, the two cranes lifted the load to a height of 12 metres and moved it right over the track perfectly synchronized. After this, they set down the locomotive and placed it precisely on the track.

The Mordefroy team needed a total of eight hours to complete the job, and their speediness was all the more impressive given the required degree of precision. “We owed a lot of it to the reliability and unrivalled performance characteristics of our two Demag cranes, which is why we really consider them to be an invaluable part of our fleet,” Patrick Mordefroy points out before going on to praise the assistance provided by Demag Support and, in particular, by service technician Jacques Jespere, who for years has proven to be someone Mordefroy Levage can always count on.