From Hollywood to the History channel, cranes give T.V. and movies a lift.

Cranes have taken a starring role in some productions.

Cranes play a crucial role in many movie and television productions by assisting with camera shots and the construction of sets and other functions.

But cranes have taken a starring role in some productions as well, either as the driving force behind a frenetic chase scene or playing a functional role in a reality television series. Key players in the companies involved spoke with Crane & Hoist Canada about what was involved in those moments.

The champion of movie crane scenes

Over 40 years of operating in California, Champion Cranes president Mike Konle, has provided cranes for a bevy of movie, television and advertising scenes. Being located near Universal Studios, Warner Bros. and Sony put his business in an ideal location to provide cranes for everything from elaborate pranks on Johnny Carson’s Tonight Show to helping stars like Tom Cruise and Angelina Jolie make daring leaps from buildings.

One film stands out in particular, however, since the crane itself took centre stage. In Terminator 3: Rise of the Machines, the villainous T-X, portrayed by Kristanna Loken, hijacks a massive Terex-Demag AC 160-2 mobile crane emblazoned with the Champion Cranes name and cuts a swath of destruction through Los Angeles in pursuit of Nick Stahl’s John Connor. The chase sees the crane smash through cars and buildings, including a sequence with Arnold Schwarzenegger’s T-800 dangling from the loose boom, before being dramatically flipped over when the hook snags on a manhole cover.

Konle says that he was approached about the scene by the film’s special effects team, which was looking to do a chase scene with a vehicle larger than a fire truck. The crew fell in love with the size of the AC 160-2 and decided to use that as the basis for a model; which they would shoot to capture the chase scene. However, Konle offered them the opportunity to make the scene much more real.

“I said, ‘How would you like to have a real crane to bash and crash instead of a model?’ We sold it to the Terminator crew and we bashed it and crashed it for three months. We rolled it over, we ripped the outriggers out of it, drove it on five wheels, drove it through walls and hit police cars. It was a spectacular scene for sure.” 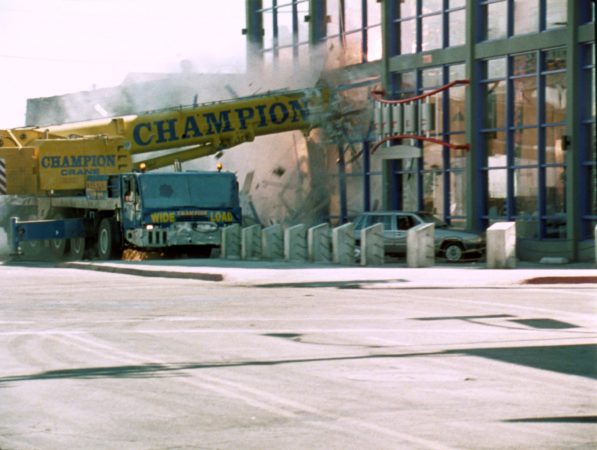 PHOTOGRAPHS TO BE USED SOLELY FOR ADVERTISING, PROMOTION, PUBLICITY OR REVIEWS OF THIS SPECIFIC MOTION PICTURE AND TO REMAIN THE PROPERTY OF THE STUDIO. NOT FOR SALE OR REDISTRIBUTION

While almost everything in many big-budget blockbusters is CGI these days, Konle says that only part of the scene is computer-generated – the hook dropping into the manhole cover and the crane flipping over afterwards. Other than that, everything was done with practical special effects and actually smashing the crane into cars and telephone poles and everything else. The building that the boom smashes through (see photo) was constructed specifically for the film.

“It wasn’t as tough as a real building or we would never have been able to do what we did to it,” says Konle. “But all the crashing into the cop cars, and that, was all real.”

Originally the crane was going to be altered by rebuilding all the controls on the passenger side for the stunt driver, so Loken could appear to be in the driver’s seat. After Konle informed the production team that this would cost in the range of $250,000, the only alterations to the crane ended up being a roll cage and five-point harness for the stunt driver and a fake steering wheel for Loken on the “wrong side.”

“She’s driving from the wrong side of the crane,” says Konle. “But to this day, I don’t know anybody that has noticed that I didn’t tell.”

After the shoot was completed, the crane was repaired and sold to a company in the Midwest. Konle says that it is still in use to this day.

Irving Equipment and The Curse of Oak Island

Oak Island in Nova Scotia has been a source of mystery for many years, with theories of what may be hidden on the island ranging from Shakespearean manuscripts to the Ark of the Covenant. In 2014, a History network reality TV program, The Curse of Oak Island, began exploring the island and Irving Equipment have been providing support ever since.

“We’re involved in a couple of different ways,” says general manager David Irving. “Right now we’re there to assist the crew on site in their exploration efforts. Very different from the traditional projects we do where there’s a schedule and it’s all about productivity. We’re trying to accommodate them where we can – if they want to stop and dig and explore an artifact, we’re here to support them and get them access to the areas of the ground that they’re looking for.”

For a couple of early seasons of the program, the work was focused around the area known as the “Money Pit.” There, they drilled large diameter caissons and excavated so the show’s stars could sift through the contents. There, Irving Equipment utilized a couple of hundred-ton crawler cranes, including a Link-Belt.

In seasons five and six, more work was focused around the Smith’s Cove area, where a 300-ton Manitowoc 2250 crawler crane was used to drive a coffer dam into the ground. Back at the Money Pit, since a larger diameter oscillator was being used, a Liebherr HS 895 was utilized.

Irving says that while the actual operations being performed are typical for Irving Equipment’s work, it does take some adjustment for the crew.

“It’s a little bit out of the norm for our guys, you have to develop a comfort level with it,” Irving says. “There’s cameras and mics on everybody, our guys aren’t used to being in the spotlight like that. I think that’s a bit of an adjustment.”

The one technical challenge Irving identifies is simply trying to determine the right places to drill for excavations. Working alongside a seismic company the production contracted, Irving offer opinions on soil conditions and what the most effective equipment would be.

“We’ve been fortunate to develop a good relationship with the production team and that they’ve called on us now a few times,” Irving says. “I don’t know if we’ll make a habit of this, but if they’re in the neighbourhood we’re happy to offer any support that we can.”

The action packed crane chase in Terminator 3 was one of the most spectacular crane scenes in movies, but there have been many others over the years. Some are iconic and visually stunning. Others raise reams of logistic questions and may seem completely ridiculous.

Terminator 2: Judgement Day – Likely the most famous crane related scene in a film, though certainly more understated than many others on this list. After defeating the T-1000 by dropping it into a vat of molten metal, Arnold Schwarzenegger’s T-800 insists that he must be lowered into the same vat to prevent his parts from being salvaged, thus averting the future robot apocalypse. After a tearful good bye, the T-800 is lowered into the molten metal by way of an overhead crane.

The Adventures of Tin Tin – The mystery at the heart of this animated feature by Stephen Spielberg centres around a 17th century high-seas skirmish between Sir Francis Haddock and the dreaded pirate Red Rackham. In the film’s climax, their descendants, Captain Haddock and Sakharine, relive that battle in bombastic fashion, by engaging in a sword fight using the jibs of two massive dockside tower cranes.

The Amazing Spider-Man – When it appears that Spider-Man may be too injured to race to the climax and the villainous Lizard, a crane operator whose son Spidey saved earlier in the film comes to the rescue. In a stroke of luck (or perhaps plot convenience) he and his co-workers know every crane operator in New York, and they all position their cranes in such a way that Spider-Man can use them to quickly swing to the final battle.

The A-Team – This adaptation of the classic television series features many complex (even convoluted) plans, but the film’s climax may top them all. In order to outwit a crooked federal agent, the team performs a version of the classic cup-and-ball con game. However, they do so with two massive dockside tower cranes and a bevy of shipping container trailers. The crane movements utilized seem beyond the realm of possibility, particularly since there had been little indication that Bradley Cooper’s Face had any experience as a crane operator.

Skyscraper – In this action film, Dwayne “The Rock” Johnson’s Will Sawyer uses a massive tower crane to gain access to the titular skyscraper. Of note, he rocks (no pun intended) the crane’s trolley back and forth to build up momentum so that the hook will fly out and smash an opening in the building. Like the A-Team, the crane manoeuvres seem suspect, particularly since again, there is no indication that Sawyer, a former marine and hostage negotiator, has any experience in crane operation.

Casino Royale – Daniel Craig’s first outing as James Bond features a trilling parkour styled chase scene around a construction site, which involves much climbing and jumping from a mobile crane and two tower cranes. Most of the action is fairly credible, likely helped by the fact that Bond’s target, bomb-maker Mollaka, is portrayed by parkour legend Sébastien Foucan. The one moment that raises questions from a crane perspective, however, is when Bond climbs onto the load of pipes being carried by a crane and hits a quick release lever that drops the load and causes the hook to retract. Such a mechanism seems like it would surely violate many workplace safety protocols.