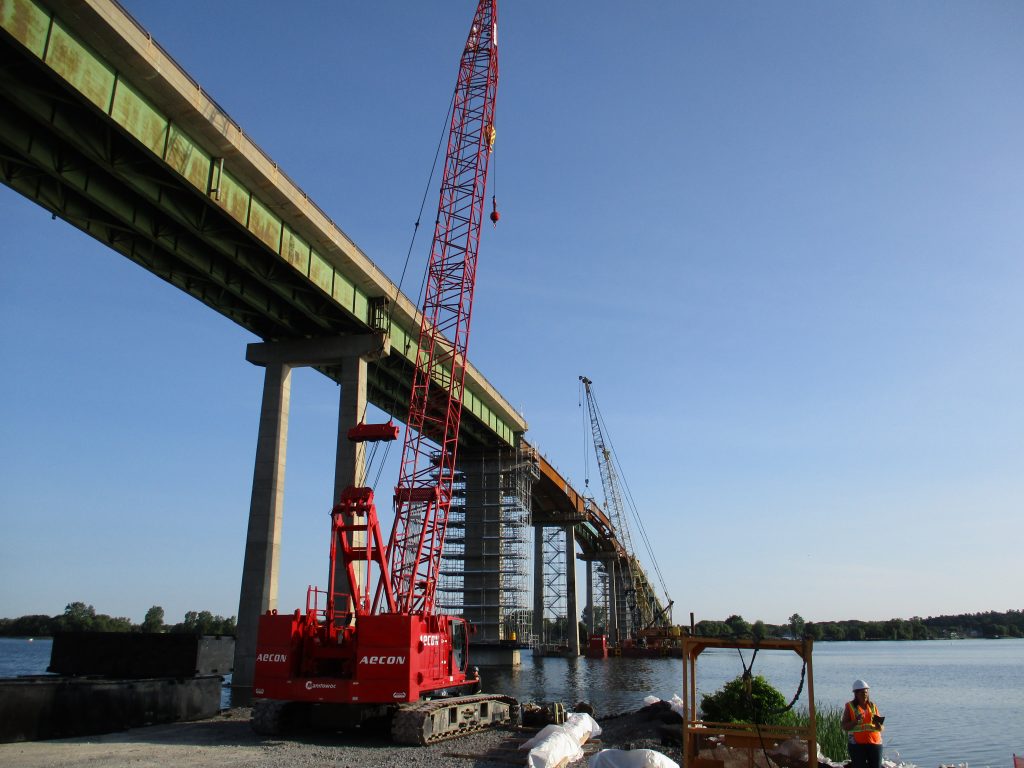 Tandem lifts and occasionally choppy waters go hand-in-hand for two crawler cranes working from barges on a five-year, $63 million rehabilitation of the Bay of Quinte Skyway Bridge in eastern Ontario.

The 850-metre-long two-lane bridge, on Highway 49 between Tyendinaga Mohawk Territory and Prince Edward County, dates to 1967, and the Ministry of Transportation of Ontario (MTO) decided major repairs were needed.

Plans include replacing the steel girders and deck, rehabilitating the piers, and reconstructing new abutments. The bridge deck will be widened slightly and will include 1.5-metre shoulders on each side. The project, slated for completion in 2024, will ultimately see the bridge length extended by 4.8 metres to accommodate the abutments.

Because the bridge spans the Bay of Quinte, Aecon Construction, the general contractor, has brought in barges to accommodate two large crawler cranes doing the heaviest lifting.

Can-Pick Crane Rental of St. Catharines, Ont., is supplying one of the crawlers, a 200-tonne American Hoist (Terex) A1500HC crawler, as well as an operator, while Sterling Crane is supplying the second crane, a 200-ton Kobelco CK-2000-II.

The two cranes have matching specifications and are being used to handle the heavy materials. 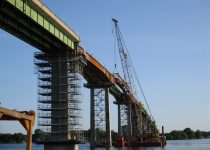 The two cranes have matching specifications and are being used to handle the heavy materials. Courtesy of E.S. Fox Constructors Ltd. 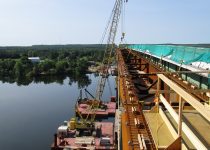 For the next five years, as each bridge section proceeds, crews will use the cranes to demolish and remove portions needing replacement. Courtesy of E.S. Fox Constructors Ltd. 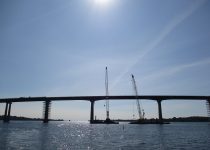 A factor that will affect a project like this is winter. The bay freezes over, so work generally shuts down by Christmas and resumes in late March or early April. Courtesy of E.S. Fox Constructors Ltd. 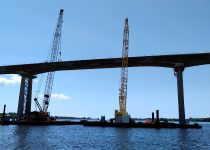 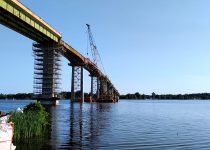 While motorists face some summertime delays waiting for the single lane to open in their direction, the project is also somewhat of a local attraction. Courtesy of E.S. Fox Constructors Ltd. 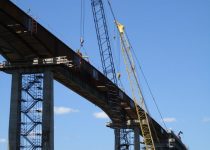 Two crawler cranes working from barges on a five-year, $63 million rehabilitation of the Bay of Quinte Skyway Bridge in Ontario. Courtesy of E.S. Fox Constructors Ltd.

Can-Pick co-owner Rob Mewhinney said the A1500HC has a 180-foot boom and a counterweight designed to minimize the machine’s overall footprint while extending its reach and increasing its lifting capacity.

While the lifts vary in size, the two cranes often work in tandem, each grabbing an end of whatever is being brought down or hoisted up.

Mewhinney singled out the tandem lifts as particularly challenging because they’re being done from separate floating vessels.

“With a two-crane lift, it’s very important that both cranes move together while performing the lift,” Mewhinney said. “And, when operating on a barge, the barges move so you are not on what you would call firm, solid ground.”

While the tandem lifts are particularly challenging, the initial issue was getting the two crawlers to site. The A1500HC was delivered in sections on seven flatbed trucks and assembled with help from a 110-ton Manitowoc 1100 crane Aecon retained to assist with the project. “It will self-erect, but that’s only if you need to,” Mewhinney explained, pointing to jacks located on the crawler’s underside.

Once assembled, crews walked the crawlers onto their respective barges, which were waiting at a pier on-site.

For the next five years, as each bridge section proceeds, crews will use the cranes to demolish and remove portions needing replacement. The two crawlers will then retrieve replacement components from shore and facilitate their erection.

The bridge’s girders were the heaviest loads handled, with the old ones weighing roughly 50 tonnes and the new ones registering 62.5957 tonnes.

All major lifts are pre-engineered, with the tandem loads requiring particular attention and co-operation, including planning meetings beforehand.

“Both operators and everybody who’s involved goes over what’s going to happen step-by-step,” Mewhinney explained. “One person is in charge of doing all the signalling and controlling the cranes. The most important thing when the cranes work together is that both operators can see each other and their load.”

The sectional steel barges have engine controls and skim the surface with relative ease, travelling from the piers to wherever they’re needed at the bridge. But working from water requires measures to curb movement. Crews drop spud legs to the bottom of the bay to serve as anchors.

“They don’t prevent the barge from going up or down, they just hold the barge – in a perfect world – in one spot,” Mewhinney said. “It still rocks and sways a bit, so there’s a little bit of motion.”

Still, there are moments that give pause. The work area is restricted territory and signed to deter boats from disturbing the barges with their wakes. Still, Mewhinney recalled one large pleasure craft missing or ignoring the signs and leaving a wake big enough to rock one of the barges and send the crane’s boom swinging. Thankfully, the cranes were inactive. Crews captured the boat’s registration plates and notified police patrols.

“It could have been bad if it was during a big lift or something and they caused [the crane] to lose it,” Mewhinney said.

High winds can also rock the barges, so crews shut down when winds exceed 30 kilometres an hour or the weather otherwise turns cranky. “When you work on a barge you need conditions where the barge is stable and not rocking,” Mewhinney said, noting that even minor movements can be awkward because the bridge 100 feet overhead is rigidly in place.

Crews use wind meters to monitor conditions, and when lifts are underway they communicate by radio to ensure safety and co-ordination all-round.

While precautions are taken for all lifts, the tandem ones are the most demanding even though they boost efficiency and even enhance control over lifts. “With a single crane, you’ve got to have tag lines and whatnot to hold the girder or whatever you’re lifting, to keep it stable so the wind doesn’t get ahold of it,” said Angelo Cornacchia, a senior superintendent with Aecon. “This never happens with two cranes holding it. The wind will get ahold of it [a load] but it would never swing and hit the boom.”

E.S. Fox Limited, a Niagara Falls-based constructor Aecon retained to install the new girders, is nominated for a 2019 Canadian Institute of Steel Construction Ontario Steel Design Award of Excellence in the bridges category, and the company’s entry form illustrated multiple challenges. Crews dealt with winds, waves and fluctuating water levels, and had to work carefully when using the Manitowoc 1100, which was positioned on dry land, to position the girders so the two cranes on barges could hoist in tandem.

“While the girders were all erected in pairs they still needed to be hoisted onto the barge one at a time and assembled with bracing and diaphragms,” the constructor’s submission explained. “Thus, consideration was needed for unevenly loading the barge when it only had one girder on it at time. While the waves and current weren’t as severe near the shore, as compared to being out in the middle of the waterway, there was still some heaving to contend with.”

Another factor affecting the project has been winter. The bay freezes over, so work generally shuts down by Christmas and resumes in late March or early April. The barges park at a nearby dock, and the Cranes stay-cation on-shore.

Quinn Mieske, a contract services administrator with MTO, said a single lane will remain open throughout construction, and the Ministry intends to maintain the full two lanes for traffic during the winter months in order to complete snow clearing. “That really dictates what Aecon can and can’t do during the winter months,” Mieske explained.

While motorists face some summertime delays waiting for the single lane to open in their direction, the project is also somewhat of a local attraction. “We have residential communities on each side of the bridge and a whole lot of people who like to come out and take photos and be as close to the action as possible,” Mieske said.

“It’s something you don’t see every day, that’s for sure. The complexity of this project, alone – it takes a whole lot of project management and everybody to be on the same page to keep things moving forward efficiently and safely.”