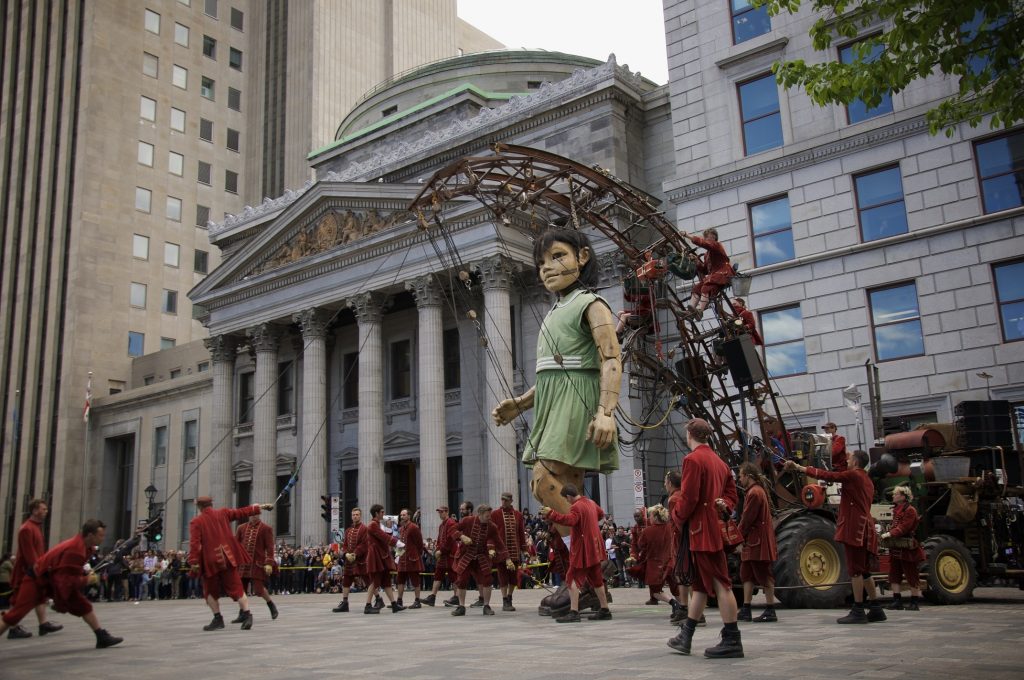 During Montréal’s 375th birthday celebrations last year, two visitors to the city stood out among all others – a pair of 10-metre-tall marionettes called the Deep Sea Diver and the Little Girl Giant. The puppets come from the Royal-De-Luxe street performance troupe from Nantes, France.

The giants’ gestures and movements are controlled by a bevy of puppeteers who maneuver them by swinging on control ropes like pirates in a swashbuckling movie. Heavily customized mobile cranes keep the marionettes upright and move them around through the city while the puppeteers provide the illusion that the puppets are moving by themselves.

Kevin Donnelly, chief of events for the City of Montréal, says his department was in charge of working out the logistics of all the performances and events that took place as part of the festival. The Royal-De-Luxe performance proved to be one of the most significant challenges he’s faced.

“The cranes themselves and the vehicles that were used to carry around the puppets, they were vehicles that they used for all of their events,” Donnelly says. “They’re from Europe – they’re obviously not made for the Canadian market – so they don’t have license plates, and they had a few questions related to emissions and stuff like that. So we had to deal with that to make sure that we would allow them to be rolling on the streets.”

The route the puppets took through the city had to be carefully planned as well – during the spring when the festival took place, certain roads in Montréal cannot be used by heavy equipment to prevent damage during the thawing process.

“The height of the puppets themselves meant that the routes had to be very well determined in advance, because in certain places, we had to remove wiring and move lamp posts,” Donnelly says. “We had to deal with certain bridges that they were going over and something they called ‘Mission Impossible.’”

The Mission Impossible lifts, presumably named for the famous scene in the 1996 movie where Tom Cruise infiltrates a vault while suspended on wires, involved separate cranes waiting at key areas, which would lift the puppets over the obstacles while Royal-De-Luxe’s cranes travelled underneath. Once both puppet and crane were on the other side, they would be reattached to Royal-De-Luxe’s crane. There were three Mission Impossible lifts throughout the path of the puppets, which were performed by a 110-ton Grove TMS9000E with a 75-foot radius supplied by Montréal’s Guay Cranes.

Donnelly says that one of the most interesting aspects of the performance was that there was limited promotion before the arrival of the puppets on the Friday. While media buzz obviously built over the course of the weekend, it could have made for some very interesting interactions early on.

“It’s quite fascinating and basically you could be on the fourth floor in an office building, look out and you had these big eyes looking in at you. It is a bit of a surprise,” he said.

Donnelly says that even after working on the logistics of the performance for quite some time beforehand, he was stunned when he first saw one of the puppets stand up in person. Even as a large crew worked different aspects of the puppet, it was easy to lose yourself in the performance.

“I was really amazed to see how something so huge could be so fun. One thing that I found personally surprising is even though the big diver is about four- to five-floors high, the kids weren’t scared,” he says. “The kids were always in the forefront of the crowd, always moving to try to see it. As opposed to other events – the kids get a bit nervous and they move back. In this case it was very different. I found it quite magical. That would be the best way to describe it.”

During the festival, the puppets told a story all weekend about the girl and her dog searching for the diver, her long lost uncle. They reunited on the Saturday evening and spent the Sunday wandering the city together. The giants have performed around the world, but this was their first performance on North American soil.

After searching for each other across Montréal all weekend, the little girl finally locates the diver, her long lost uncle.