Features
Are helicopters leaving cranes up in the air? 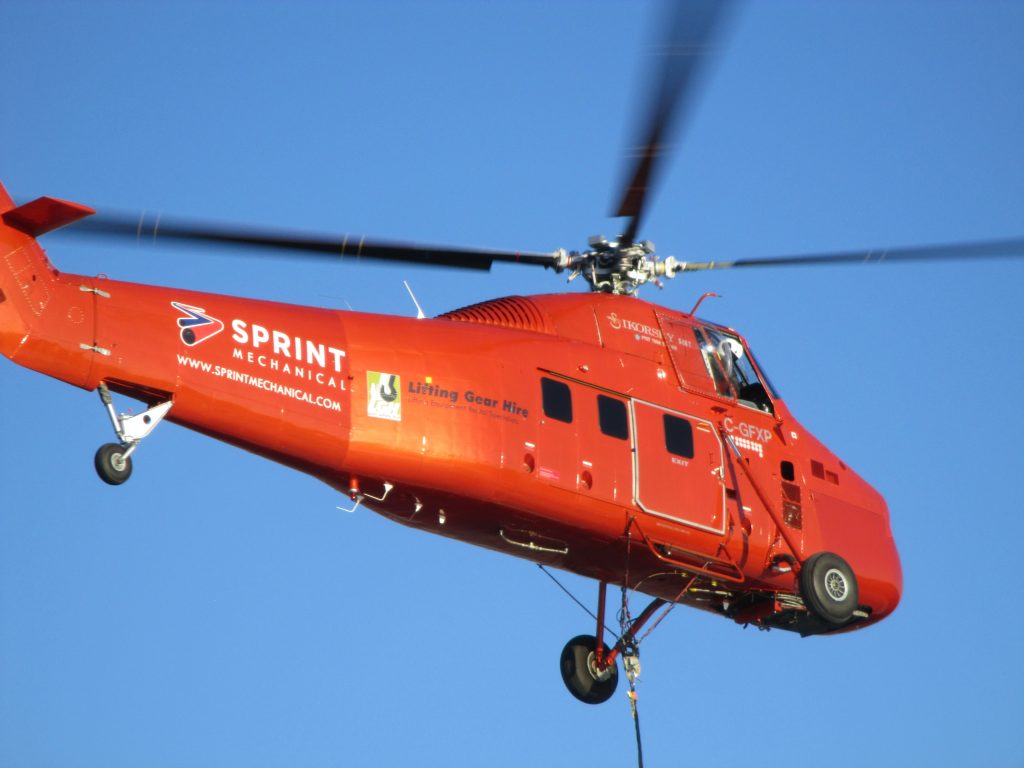 A helicopter can offer flexibility at a job site. Loading and unloading can take place pretty well anywhere with limited disruption.

It was thumbs-up as the Sikorsky S58T lifted off from the Brampton, Ont. hangar Sprint Mechanical shares through a partnership with Four Seasons Aviation.

Were it not for their radio communication headsets, the eight crew members would have relied fully on hand signals and yelling as the twin-engine helicopter whirred deafeningly towards Cambridge Centre shopping mall in Cambridge, Ont.

“We’re flying at about 115 miles per hour and we’re at about 500 feet above ground level, so we’ll have to watch out for cell towers,” explained Ian Bergeron, Sprint’s vice-president of safety and legal affairs.

A half-hour later, about the time it took the sun to rise into full view, we had passed over small woodlots, ponds and farm fields and landed onto a parking lot that was empty; save for a fuel truck, 19 large HVAC units and two dozen crew members.

Bergeron took attendance and ran through safety considerations. The chopper’s carrying capacity is 4,500 pounds and the HVAC units range from 760 to 2,700 pounds, so no looking away from the load or standing directly underneath. And watch out — the rooftop’s slippery.

A 50-foot kevlar longline offered sufficient distance to protect the ground crew from gale-force winds the blades exuded, and each load rose and returned down at a precise angle to ensure safety. In eye-pleasing synchronicity, crews released their straps and the first load rose to the heavens.

The sheer effortlessness made a compelling case for using a helicopter rather than a crane when circumstances warrant. Nineteen HVAC units went up and eight old ones were hauled off in little more than half an hour on this suburban mall.

“There wasn’t much to set up,” Bergeron said. “We didn’t have to bring in any load-bearing beams for shoring, or any cribbing. We didn’t need a trailer or counterweights, or another crane to set up the (main) crane. We took 15 minutes to set up and 10 minutes to clean up. We were in and out in less than an hour.”

“We could reach areas of the roof you couldn’t reach with a crane without moving the crane,” Bergeron said. “It’s a big deal to move a 350- or 400-tonne crane, whereas we could locate our helicopter anywhere we wanted. And there wasn’t space to locate a crane on the far side of the mall without tearing up a garden.”

A helicopter also offers considerable flexibility at a jobsite. Materials can be loaded and unloaded pretty well anywhere, and scrap can be taken directly to designed piles.

“We can take things anywhere you want and not just put it next to the crane, so you don’t have to handle the material again,” Bergeron said.

The ability to compress a schedule from days to hours helps minimize and even avoid traffic congestion. Fire routes remain open. And work can be done in the scant time between dawn and mall opening hours.

“Time is money,” Bergeron said. “If your crane takes up 100 parking spaces during a revenue day that’s a lot of lost revenue for the mall.”

Bergeron also stands by his Sikorsky in terms of project costs.

Still, Bergeron recognizes there are jobs meant for cranes. In fact, the company maintains a 5-ton boom truck and an 8-ton carry deck crane for work it does as a mechanical services provider. “We use them mainly for installing piping underground in downtown Toronto,” he said.

Helicopters could literally dance circles around a crane, yet Dwight Crane president Brian Dwight doesn’t see them as competing. In fact, the Ajax, Ont. crane service provider subcontracts to Sprint-Four Seasons when helicopter services are optimal for a particular task.

“I see them as very complementary,” said Dwight, who wasn’t involved in the Cambridge project. “Any time we have something that’s within the range or practicality of a crane, or where it’s going to take two or three days to set up and take it down just to put up one unit, it makes sense. Any smart crane operator should have a helicopter company in their back pocket.”

Dwight’s confidence in helicopters might enjoy a boost because he flies one recreationally. Nevertheless, he said he farms out the work because he considers flying professionally as outside his company’s core expertise.

“Being a helicopter pilot myself I’ll know if a job is really doable in this way. This puts us in the right position to suggest the right choice to the customer,” he says.

In the case of Cambridge Centre, Sprint-Four Seasons was commissioned by PCL Constructors Canada (Toronto), which is overseeing renovations at the mall. Project manager Jason Toste said PCL has used helicopters for previous, similar hoists.

“We only had a short window of opportunity,” Toste says. “So at the end of the day, from a schedule point of view and to lessen the impact on our client, Morguard (the mall’s owner), and mall operations, it was best to go with the helicopter.”

Still, Toste and PCL acknowledge appropriate occasions for each machine. PCL retained Sprint-Four Seasons for an initial lift of 23 units in March, with 12 old ones coming down, and a second visit in April job saw 19 units go up and eight come down. However, in early May PCL used a mobile crane to hoist eight remaining units and retrieve 14 units where the rooftop HVAC set-up was relatively concentrated and the units were easily accessed.

“We were able to get a [Liebherr] LTM 1130-5.1 165-ton mobile in there and place the eight units in a little over an hour and a bit, and then do the same taking the old units down,” Toste said.

“They were small units, probably 60 feet from the edge of the roof, so it wouldn’t make sense to use a helicopter when you can reach easily and efficiently [with a mobile crane],” he said.

For Sprint, much of the preparation for helicopter lifting is comparable to using a crane. Bergeron supplies engineering designs and plans, including the rigging, shackling, lifting points and centres of gravity. Four Seasons Aviation operates the aircraft under Transport Canada licence and handles piloting and maintenance.

Dave Tommasini, president and chief pilot with Four Seasons, said it makes sense for crane companies to team up with a helicopter provider because of the complexities required to meet Transport Canada protocol.

“It’s quite involved and expensive and it takes time to get everything accomplished,” he says.

While Four Seasons works with contractors such as Sprint, the company also maintains working relationships with Dwight Crane and has made inroads with other crane companies, Tommasini said.

“Originally we were concerned we might be taking business away from them,” he says. “But I think they realize we can be a nice complement to what they do. There’s certain occasions when a crane can’t do a job, or where we can be an option. So it’s become more of a cooperative effort. We respect each other’s capabilities and it seems to work pretty well.”

A helicopter can offer flexibility at a job site. Loading and unloading can take place pretty well anywhere with limited disruption.