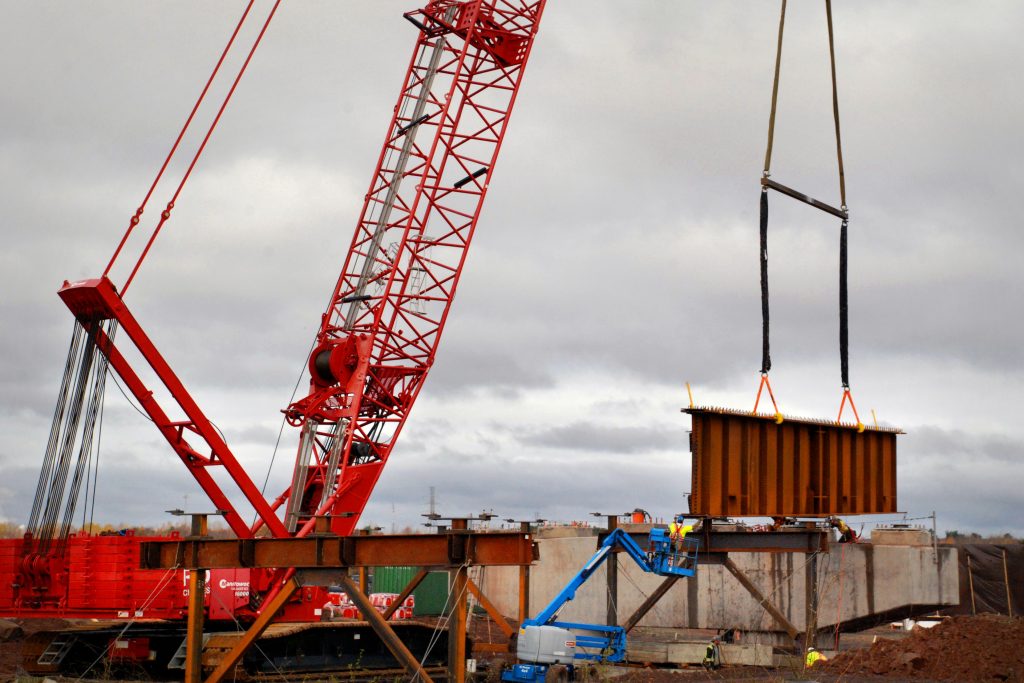 As the girder is held in place

Construction is underway for a new 240-metre bridge over the Petitcodiac River between Moncton and Riverview in New Brunswick.
As part of that construction, commuters passing over the existing Gunningsville Bridge have become accustomed to seeing a large mobile crane towering over the site in recent months. The work on the bridge has been divided into a number of contracts, as companies with varied specialties have taken over different aspects of the job. The major crane operations have been under the purview of Canam-Bridges, which is tasked with erecting the structure and the bearings on the bridge.

“In the original bid drawings and contract drawings, the access around the piers were already included or shown on the drawings, they were part of the previous contract that another contractor had,” says Raphael Gagné, project engineer with Canam-Bridges. “Our scope is to pour the last part of the bearing blocks, install the structure – the girders, the bearings – and then grout the bearings and finish the field structure.”

While Canam-Bridges has used a few smaller pickers to move material around, major operations have been performed by a Manitowoc 16000 crawler crane with a 440-ton capacity supplied by R&D Crane. A 300-ton crawler was also considered, but the extra reach of the 440-ton crawler made it the ideal choice.

“For this type of terrain, and also the fact that we had a lot of girders to erect over a bridge that has a certain length, that’s why we went with a crawler,” Gagné says. “Also, we had to add a little bit of access – we built some extra paths that we planned for in the bid. For the size of the crane, it mostly came down to availability and how close or how far we wanted to be from the girders because that would have impacted our civil work – bringing in dirt and machinery to have extra pads to get closer. It mostly came down to access.”

An access road along the piers was supposed to be the initial access for cranes to the site, however Gagné says that would require a truly massive crane to work. So, as part of their bid, they had some ground work done to bring the pads closer to the girders and the pier.

“That meant ground testing capacity. We had to bring in some ground and some machinery in order to extend the pad and we also brought in some wood crane mats in order to spread the load a bit more, but nothing out of the ordinary.”

The logistics of the job proved to be an interesting challenge for Canam-Bridges. Gagné says they normally would work on behalf of a general contractor; however, in this case the contract was offered by New Brunswick’s Department of Transportation and Infrastructure, so Canam had to manage the crane pads, machinery and other related tasks.

“It’s roughly simple, but we are a steel fabricator and erector,” says Gagné. “Gravel and loaders and compactors aren’t our usual work; so it was a challenge coordinating with subcontractors who we’re not used to working with. But besides that, it was fairly straight forward.”

As the girder is held in place

Related
Upper Cambie Bridge replacement complete
Cranes do heavy lifting at Crowchild Bridge in Calgary
It takes a Beast to build a bridge in Victoria
Cranes and cannabis: Truth vs myths
Tags