Features Cranes
A life-long fan at the age of 94 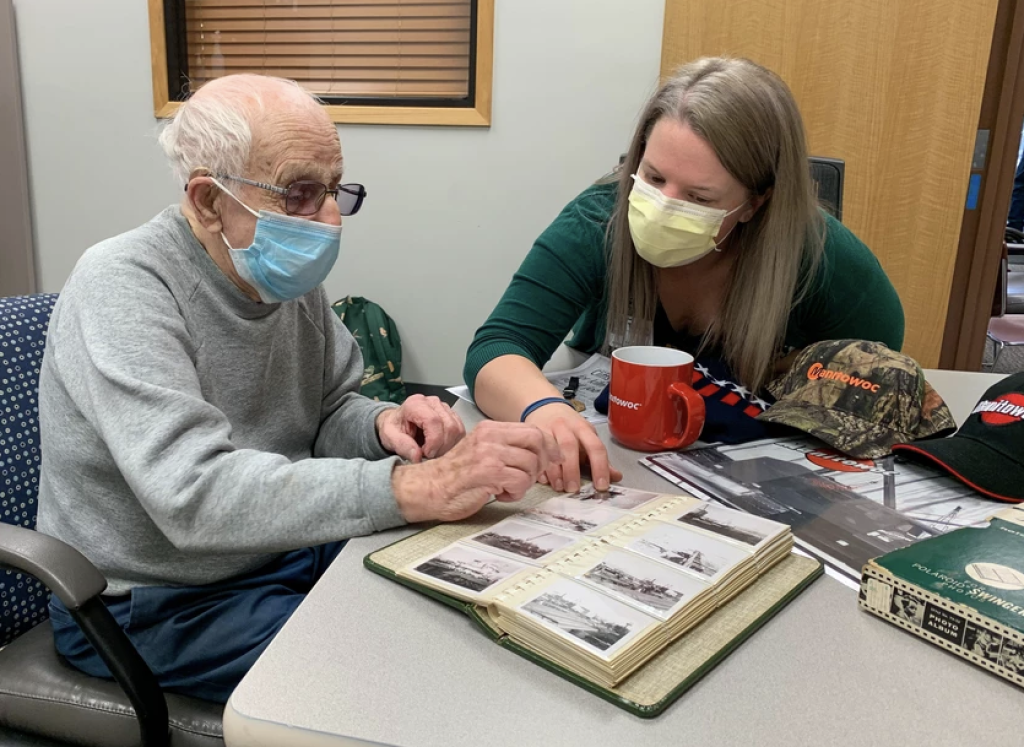 Norbert Beauchamp (left), looks at photos from his time as a Manitowoc crawler crane operator, along with Katie Miedona, physical therapist assistant at UP Health System Rehab Services in Marquette, Michigan. Manitowoc memorabilia is seen on the table.

Norbert Beauchamp, now 94 years old, sits down with Looking Up and shares memories from a bygone era — explaining what it was like to operate crawler cranes from the 1950s up until the 1980s.

Manitowoc has more than its fair share of lifelong fans, but not many of them were around when the company was just getting started in the crane business.

Way back in 1928, Manitowoc had just assumed sole control of the manufacture and sale of the Moore Brothers’ Speedcrane design — and around that same time, in February 1928, Norbert Beauchamp was born. Manitowoc’s Looking Up caught up with Norbert (also known as Mike) to ask about some of his memories from operating various Manitowoc cranes for more than a quarter-century during the post-war boom period and beyond.

LU: When did you first get into a crane, and how did that come about?

Beauchamp: Well, I grew up in Marquette, Michigan, almost the youngest of five boys and three girls. I only stayed in school for eight years because times were tough in those days — and you didn’t need much training to operate machines!

I was soon running shovels and draglines and moved on to the Manitowoc 1600 crawler crane when I was in my 20s. I wouldn’t say it was by accident, but I was greasing for a guy who got sick, so the boss said, “Mike, you take that machine, you know it up and down and everything!” So, I joined the International Union of Operating Engineers (IUOE), Local 324, in 1952 and retired in 1985. But I’ve still got lifetime membership status.

Beauchamp’s IUOE card, issued in 1952 (left); Beauchamp shows off a Manitowoc medal from the 1960s.

LU: Wow times, have changed! Our cranes today are still very instinctive, but you’d definitely need a bit of classroom time before getting behind the controls on a jobsite today! Did you notice the cranes evolving over all those decades working with them? Did they become easier to use?

Beauchamp: Well, back in those days we preferred the manual operation. Sure, the levers are slower and a little more work, but you got the fractions [small increments that are manually controlled] you wanted. A lot of guys liked to use the master clutch — you could really bring her in and just use the master to move a hair.

I never ran a hydraulic crane, though. One day, me and my buddy were watching some guys putting a storm sewer in, and he asked, “Mike could you handle that (hydraulic crawler)?” I said “No, I wouldn’t even know how to get the bucket off the ground!”

LU: So that first crane you operated, the Manitowoc 1600, was launched back in 1939 and could handle 20 tons — can you tell us about that?

Beauchamp: That was a good machine. I remember Manitowoc demonstrating how it could pick up another 1600 or 4600 crawler “sister ship”. You could take the 1600 into places no other crane would go, squeezing it in-between columns, but I liked my next crane, the 3900, better. Once I even talked with the man who designed it.

I did my biggest ever pick with it, some huge girders at White Pine copper mine when I was working for Thornton. A train came off the track nearby, and there were three girders in each car, so we had to lift it back up and put it back on the track before we could offload them. It was over 50 tons, but the 3900 did the lift easily, it trucked right along!

LU: Yes, the Manitowoc 3900 was built to precisely handle 60 t submarine sections during World War II, so that would’ve been nothing! But tell us more about the project at White Pine — was that the biggest job you worked on?

Beauchamp: White Pine’s a huge copper mine on the Upper Peninsula of Michigan that I was working on ‘round about 1960. Boy, that was a big job; we did everything — that’s what was so good about the Manitowocs. We poured the concrete, 4,200 cubic yards a day, with me in the 3000W. Then we started placing the steel, to build the furnace. I spent Thanksgiving up there two years in a row because there were no paid holidays — if the snow stopped you getting back for the Friday, you lost money!

LU: You did a lot of work from barges too, didn’t you?

Beauchamp: Yeah, in 1960 we finished the Portage Lake Lift Bridge in Houghton, Michigan — it’s the nicest bridge you’ll ever see. I dug the ditch for the sewer pipe and put in some break walls. Mind, you had to have sea legs when working from a barge – when the boom was down, there would be water coming over the tracks, but it didn’t bother me. I did a lot of work in Minnesota too. One time in Duluth we were working on a pier on Lake Superior for the Woodrush icebreaker. We were getting ready to extend it by 50 feet, but after cutting through the concrete, it went down in the lake! No crane on earth could have lifted it back up, so we just lowered some dynamite down there and blew it up. Once all the smoke and the spray had settled, the first thing I see is the cook from the Coast Guard station running up with the biggest frying pan I’d ever seen in my life, hoping the dynamite had brought up some fish!

Some of Beauchamp’s photos of Manitowoc cranes.

LU: It sounds like every day was a new adventure. You must have loved it. So what finally caused you to call it a day?

Beauchamp: Well, I was 57 when I retired because I was working too far away from home, and I had to take care of my mom. I really enjoyed my work, but I hung it up, after 30-odd years working for Thornton, Lynberg and McKee. I would definitely encourage any young kid out there to follow in my footsteps — it was a great experience.

LU: And finally, Norbert, what do you think of today’s Manitowoc crawlers?

Beauchamp: Why, they’re really nice. Yeah, I still stand by Manitowoc. When you’re in a Manitowoc, you’ve got nothing to worry about.

Beauchamp at the rehab clinic he attends twice a week to stay in shape. Clinic therapists reached out to Looking Up about Beauchamp after hearing stories about his passion for Manitowoc crawler cranes.
(Manitowoc / Looking Up)
Print this page