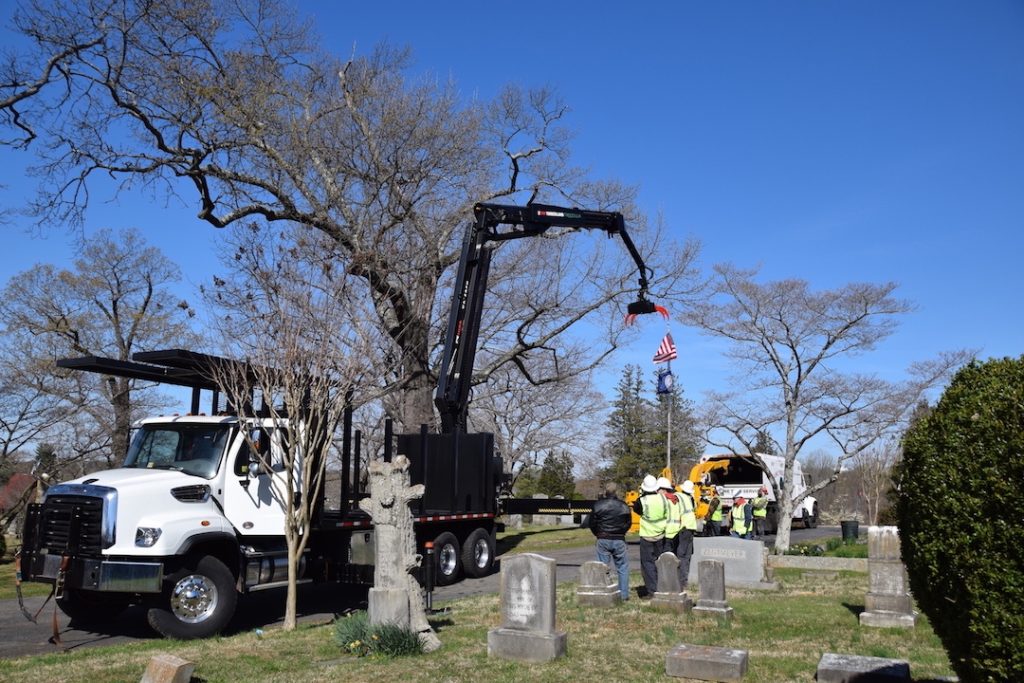 Still, it can be challenging to judge the weight of a load to ensure the crane stays within capacity. But that could improve thanks to a new computerized system that tracks lift weights in real time using a load pin designed for tree felling.

Treezilla is the brainchild of Timberland Trucks, a company in Bassett, Virginia that outfits custom-built trucks with knuckle-boom cranes and other tools of the trade for arborists.

While cranes usually come equipped with load sensors, these often indicate only what percentage of the lifting capacity has been reached, Timberland owner Jack Lippett told Crane and Hoist Canada.

Lippett’s interest in tree felling might stem from the fact he’s Canadian, born and raised in Ottawa. He met his future wife, an American, and they eventually moved to New Jersey, then to Virginia’s Blue Ridge Mountains.

Working initially in steel fabrication, Lippett veered into work-truck assembly and latched onto the arborist market when a customer asked him to outfit a truck with a knuckle-boom crane, grapple, and other tools for tree cutting.

Lippett established relationships with various crane manufacturers, including Hiab, and it soon occurred to him arborists might benefit from being able to measure the precise weight on the end of their boom.

In scrapyards, for instance, he recalled loading steel and other materials onto trucks, and using load pin-based systems to retrieve data stating the current load. He could even keep a running tally.

While most cranes are equipped with load sensors, these tend to simply indicate when a particular load is either safe or possibly exceeding its limits. This is fine when picking up a known weight — say a package of materials on the ground. But in tree cutting the weight of limbs is generally unknown because wood weights vary by species and a tree’s condition isn’t always obvious.

“Cutting down trees is completely different from probably any other crane operation you can imagine,” Lippett said.

A load pin lets arborists measure precisely what they’re cutting, letting them judge whether they might safely increase the sizes of limbs they’re removing in order to increase productivity, or whether it might be wiser to back off a bit for safety’s sake.

While load cells are widely available commercially, Lippett wanted ones specifically designed to fit onto the rotators of the felling grapples that attach to the Hiab knucklebooms he mounts onto trucks.

Lippett worked out parameters for his ideal load pin, researched potential manufacturers, and settled on Straightpoint, a company based in Hampshire in southern England.

“We actually contacted several companies,” Lippett said. “Some didn’t take it seriously or weren’t interested in doing something unusual, but Straightpoint was interested right from the beginning.”

Lippett supplied his preferred dimensions and Straightpoint developed a prototype that fits into rotators without any modification required.

Straightpoint president David Ayling said other manufacturers produce load pins, but it’s the blue box and its accoutrements that are attached that makes the product truly unique.

The load pin uses a tiny wireless transmitter to send data to a remote control that’s either attached to the operator’s belt or is worn around the neck, and the blue box protects the technology from the elements.

Load pins are usually used for crane sheaves or for more traditional lifting projects, so Timberland’s order was clearly a departure from the norm. “It’s a great match of raw power and cutting edge technology,” Ayling said. “We love to see these different and varied applications.”

While Straightpoint supplies Timberland with load pins on a regular basis, the company markets them internationally through its network of about 80 distributors. “We manufacture dozens of custom load pins alongside our more standard products across the world,” Ayling added.

“In tree removals, one cannot ignore the need to carefully estimate pick weights beforehand and to make conservative picks,” Gerstenberger said. “Once the cut is made, you own the load and it’s too late to put it back.”

Based in the U.S., the TCIA sells a green wood weight chart for estimation purposes, and free mobile apps are available for the same purpose, Gerstenberger said. “Members have been using load cells with Bluetooth connectivity in rigging situation for a few years now.”