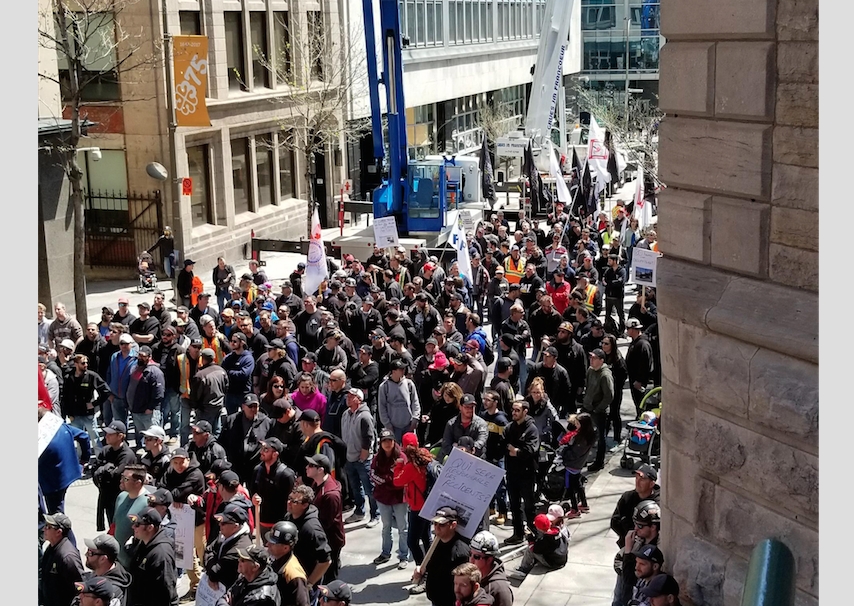 Flanked by a few of their cranes

In early May, members of Quebec’s crane operators union drove their rigs through the streets of Montreal en route to a protest on the steps of the Premier’s office voicing their opposition to recent changes to training regulations. The new regulations make it easier for journeypersons from other trades to enter the crane field, and allow in-house training to be utilized. The changes have been enacted in anticipation of an upcoming labour shortage.

Spokesperson for the Local 905, Gilles Larivière, says that the union are concerned that these changes will cause safety issues.

“It’s going to come down to that – more accidents,” Larivière says. “People doing stuff that they’re not equipped for, that they don’t have the training for yet. It takes a while to get comfortable. Right now in Quebec, if you want to become a crane operator, you have to go to school. And in this law they brought out a piece of it that a company can hire somebody and do in-house training and he can become certified. We haven’t had that in Quebec for a long time now.”

Melanie Malenfant, spokesperson for the Commission de la construction du Québec (Construction Commission of Quebec) argues, however, that the changes are necessary in anticipation of a labour shortage and that the regulations haven’t actually been reduced.

“The trade of crane operator was the only one in the industry for which access was impossible for non-graduates in cases of labour shortage or for journeymen in other trades,” says Malenfant. “The requirements for training crane operators have not been reduced; rather, they have been enhanced. For instance, the 45-hour course ‘Utilisation sécuritaire de grues’ (safe crane operation) has been replaced by 150 hours of training, with practical and theoretical sections.”

A key source of contention for the union is an 80-hour training course available to journeymen in other trades to operate boom trucks, 30 tonnes and less, with fixed controls.

This training is available solely for handling materials related to their trades. However, the union remains concerned regardless of the relatively smaller size of the cranes.

“From our experience, these boom trucks up to 30 tonnes have very long booms,” says Larivière. “They’re very easy to top over. It’s like playing with a fishing rod. The experience needed is a bit more than 80 hours.”

Malenfant responds that the training is combined with a qualification exam with a pass threshold of 80 per cent, and that in order to maintain their qualification, journeymen will have to prove that they have worked 50 hours per year in the activity.

“We had to proceed with these changes because it was difficult for employers to find crane operators available to operate this type of machinery, which is used sporadically and occasionally on construction sites,” says Malenfant. “In the absence a crane operator, other, untrained workers were called upon to perform this task without holding any particular qualification. It is this dangerous situation that we have corrected.”

One solution that the union proposed was the option of changing some of the regulations regarding apprentices who are training in the field.

“In Quebec, the apprentice is not allowed to operate by himself – he always has to be under supervision,” says Larivière. “But we were willing to say, ‘well, open up the law enough to let our apprentices operate the boom trucks by themselves.’ They’ve already been to school for at least 800 hours. They have a lot more training.”

Malenfant responded to a question of whether a change to the apprenticeship rules was considered by stating that, “The rules for apprentices are clear: they must be supervised by a journeyman during their apprenticeship.”

Malenfant also stated that the regulatory changes that have come into effect were adopted following approval by official bodies in the industry, which include employer and union associations. The rule change was also approved by Quebec’s health and safety board, Commission des normes, de l’équité, de la santé et de la sécurité du travail (CNESST).

Larivière is unmoved by the assertion, stating that the CNESST is more concerned that someone is trained, rather than how they are trained. He says the union is looking at other avenues to pursue the issue but they remain uncomfortable with the regulation change.

“Locals are always trying to make sure that safety comes first for all our members and the public also,” says Larivière. “This will affect the public more than my members, actually. Our certified operators are not going to be in the seats, but it’s the public that will end up with the risk of accidents. We’ve already had quite a few of them lately, and with this change going in there are going to be more.”