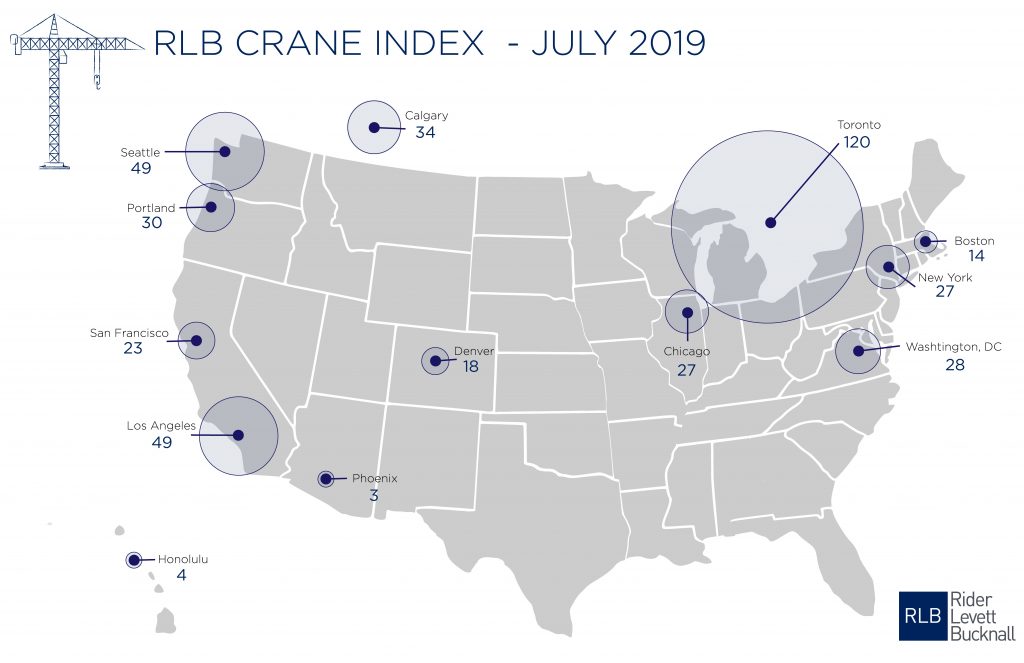 Toronto has topped the Rider Levett Bucknall (RLB) Crane Index for the North America – January 2019 report surveying the number of active tower cranes in various cities. The study was released in August and surveys 13 major cities across the continent.

“We have 120 cranes in the downtown core, but we have 246 cranes in the GTA (Greater Toronto Area),” says Joe Pendlebury, senior vice-president for Rider Levett Bucknall who oversees the company’s Canadian offices.

Pendlebury says that 68 per cent of the cranes operating in the downtown core are being used for residential construction; while mixed-use construction (residential with office space) makes up an additional 14 per cent.

“The low availability rates are causing an increase to the enthusiasm for these guys to build office and residential space,” he says.

The report states that increased infrastructure spending is expected to trigger additional activity, with more than 400 high-rise buildings on the docket for development; and that the number of tower cranes operating in the downtown core, percentage-wise, is losing ground when compared to those being erected outside the downtown core across the GTA.

The report states that newly implemented standards governing urban density are responsible for increased tower crane operation in the city; and that high-rise, multi-family projects are “making an impact on the skyline.”

Other areas where tower cranes are currently active throughout Calgary include the downtown, the University District, East Village, and the Beltline area; where office, commercial, mixed-use, healthcare, and infrastructure construction are underway.

“There is some need to try and get more density within the downtown core,” Pendlebury explains. “So that’s encouraged higher towers to be built.”

Toronto and Calgary are currently the only two Canadian cities surveyed in the report.

“I think the majority of the markets are up, so we’re in a good economy. In Toronto we’ve got another 400 projects on the books, and some in progress, so the future looks good,”

Pendlebury says. “Cranes tend to show a boom – no pun intended – that things are growing and things aren’t shutting down… it’s kind of an easy indicator that the economy is good and the forecast is good.”