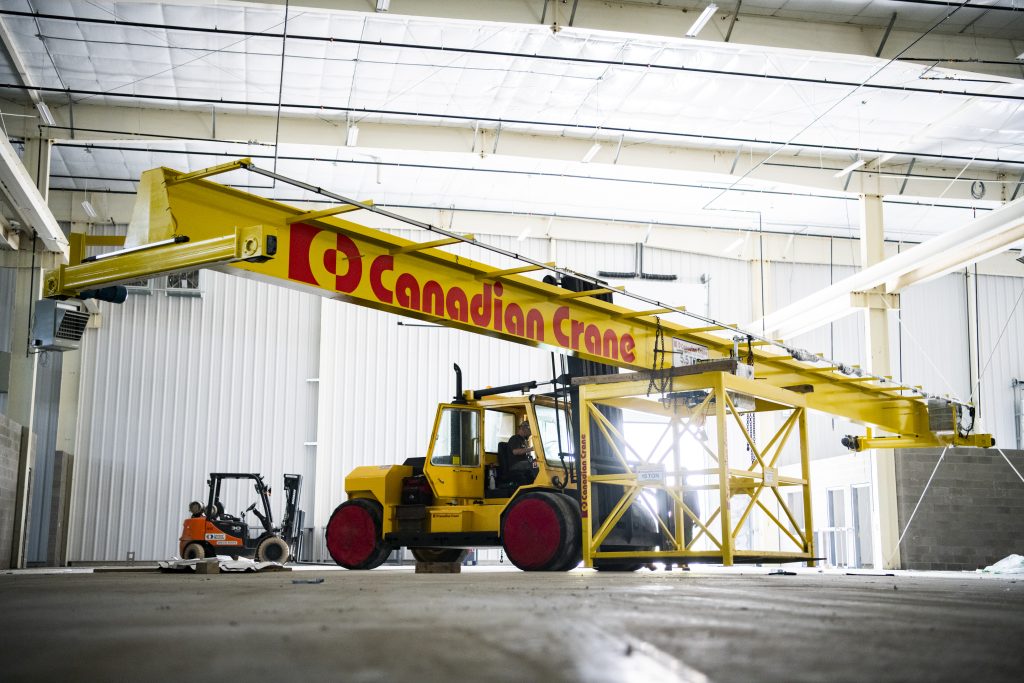 Overhead crane modernization is increasing in popularity, as equipment owners look for the latest features, without the cost of a complete replacement.

Foad Sabet, president of Canadian Crane in Barrie, Ont., explained the company tackles two types of modernization: simple modernization and complete crane overhauls. Simple modernization, which may include upgrading to radio remote control or frequency drives, has increased in popularity in the last three or four years.

In the last decade, the price of radio remote controls has dropped. Combined with improved safety, it’s a feature that’s in demand for overhead crane owners.

“The wireless system just gives you a lot more safety. The operator can be stationed anywhere,” Sabet said. “The operator doesn’t have to be tethered to the crane or near the load.”

Convenience is another feature offered by radio remote controls, as the system improves ease of use.

“It’s like having keyless access to your car. We used to unlock our doors manually, but once you’ve had a keyless system, it’s just a lot easier,” Sabet said.

Commodity pricing is another reason why modernization is gaining traction, according to Andrew Phelan, vice president of sales at Hoisting Ltd. in Nisku, Alberta.

“Our steel prices nearly doubled throughout the course of 2021. And they are maintaining that price point into 2022,” he said.

“To start fresh, you are looking at a substantial lead time, and perhaps a much bigger price point than has been historically acceptable to the market,” he said.

Modernization may also be the answer for a growing business that needs more capacity on its crane.

“Perhaps the nature of their business has changed, and the 5-ton crane now needs to be 7.5 ton or 10 ton to facilitate a new process,” Phelan explained.

Modernization also contributes to productivity and can avoid possible costly downtime if a repair in required. While a crane built in the last decade will likely have parts and service expertise readily available, that’s not the case for older machines.

“If you’re looking at something built in the 1990s, you could be waiting 12 weeks for a part to come in,” Phelan said.

While modernization may help improve safety and boost production, some overhead cranes are just not suitable candidates for an overhaul. If the modernization cost exceeds 65 to 70 per cent of the cost of a new crane, Phelan explained the process is no longer an option.

“If everything requires substantial rework or rebuild to the point that it’s not economic feasibility, it doesn’t make sense,” Phelan said. “If it’s going to cost you more to modernize, we’re not going to do it.”

Whether or not modernization is feasible is also dependent on the application and requirements of the client.

“If they have something that just wouldn’t perform even with an upgraded hoist, you’re throwing good money after bad,” Sabet said.  But if you have something with good bones and needs a new hoist or new controls, then we would offer that option.”

Some overhead crane modernizations may also equal a shorter lead time, according to Phelan.

“There’s less engineering associated and we’re not fabricating a new steel structure,” he said. “We’re just swapping like-for-like or like for an upgrade within the engineer’s tolerance.”

A complete crane rebuild, however, may require more downtime than installing a new crane, depending on the machinery and the facility.

“You need to do all the work onsite. A new crane may equal one or two days on site. A big modernization overhaul could be a week or two weeks on site,” Sabet said.

A large-scale rebuild is a technical and timely process and may cause too much disruption to productivity.

“It depends upon the application, the client’s budget, the ability to have downtime and access into their bay,” Sabet said.

Sabet explained one of Canadian Crane’s clients required wheel upgrades on an overhead crane but could not afford the time needed to disconnect the production line’s multiple cranes.

“So, we took it down and brought it to our facility to do the modernization. Then we took it back and reinstalled it,” Sabet said. “That was easier for them, instead of tying up the cranes for a week to get all the work done. It’s safer for us as well.”

To determine feasibility, the process usually begins with a client meeting to determine need. An engineer will also examine the crane to ensure the crane’s structure is suitable for modernization.

“When we know how far the client wants to go, we can do a feasibility study to see if modernization is more cost effective than purchasing a new crane,” Sabet said.

The goal is always the same: increase safety, increase productivity and improve the bottom line of the facility.

“We can move the piece of equipment into the 21st century, so you’re operating something that’s safe, modern and you have a maintenance company that’s familiar with it,” Phelan said.