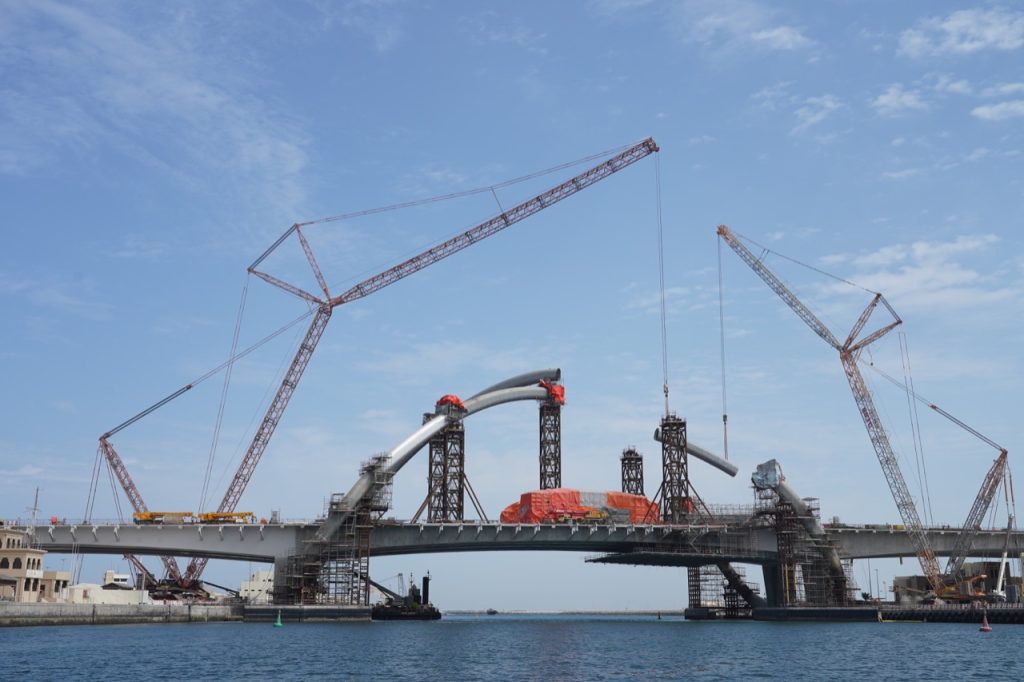 Mammoet assists in the construction of Dubai's Infinity Bridge in this file photo (Image: Mammoet)

SHV, the parent company of Mammoet, is pausing investments, new projects and exports to Russia.

Following Russia’s invasion of Ukraine, SHV said its priority is the well-being of its more than 1,100 employees and their families in the region. As well, SHV teams are working to help secure their safety, using all the resources that are available.

“During the past days, SHV, Mammoet’s parent company, has followed the tragic events in Ukraine with sadness and disbelief,” the company said in a news release. “Our deepest sympathy goes out to all the people and families seeking safety, shelter and peace following the violation of the territorial integrity of Ukraine by Russia.”

As well, SHV is assessing its current and future obligations on a continuous basis as the situation evolves.

“We fully adhere to the sanctions, both in spirit and in law and make sure we stay compliant in what we do,” the company said.

The Liebherr Group has also voiced its support for the sanctions imposed on Russia and is currently implementing the extensive sanction measures.

“All of us at Liebherr share the concern for the safety of the people in the affected regions as well as the worry about the humanitarian repercussions of the war. We hope for an immediate de-escalation and end to the war,” Liebherr said in a statement.

While Liebherr notes adhering to sanctions will have an impact on business, it is too early to provide a final assessment of the affect.

“Since the situation is highly dynamic, it is too early to make concrete statements as to the extent of this impact,” the company said.

Both Liebherr and Mammoet have announced plans to support the need for humanitarian aid to Ukraine.

The Liebherr Group’s parent company is making donations to the Swiss Red Cross (SCR) and the UN Refugee Agency (UNHCR) to support both organizations’ effort to support the people in the war zone as well as refugees.

For SVH, its energy subsidiary Gaspol is providing gas bottles for heating to the shelters of refugees.