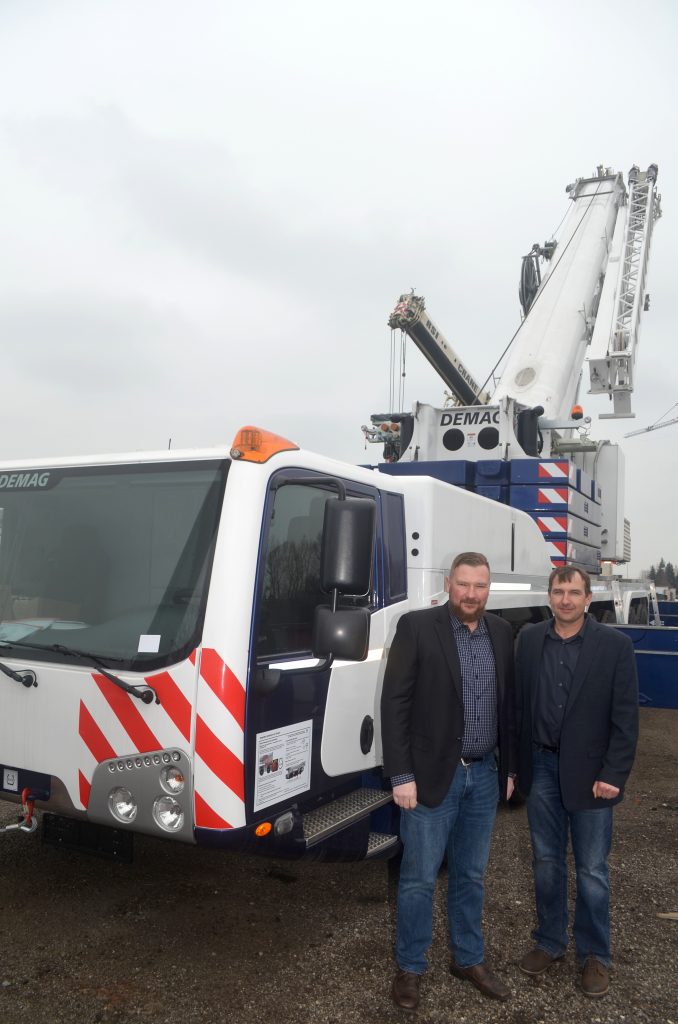 Modern Crane took ownership of the first-ever Demag AC 300-6 to arrive in Canada from Cropac this past January.

Terex Cranes’ Demag AC 300-6 all-terrain crane has arrived in Canada. Cropac, one of Terex Cranes’ biggest and most active dealers, officially sold the first-ever Demag AC 300-6 to come to Canada to Milton, Ont.-based Modern Crane, which took ownership of the crane this past January. Cropac president Bill Finkle says that the main application for this type of crane is the erection of tower cranes.

“This class of crane has been very popular in Eastern Canada,” Finkle says. “It’s going to change the way we put up tower cranes.”

Modern Crane, a division of Pumpcrete Corporation, has additional offices in Niagara Falls, Kitchener, London, Oshawa and Concord, is highly active in the heavy lifting and concrete pumping sectors across Ontario, and employs approximately 300 people.

Finkle says the Demag AC 300-6 has a wide variety of impressive features, including increased capacity at the tip, and that these cranes are ideal for the Ontario market.

“Ontario has more tower cranes than anywhere else in North America,” Finkle says. “This has a big jump in capacity compared to what’s out in the field. We expect to sell more in the future.”

The six-axle all-terrain crane has a 300t (350 US ton) classification, features an 80-metre (262.5 ft.) main boom and is the first crane of its size in the Demag range equipped with a luffing jib. The 80-metre main boom is designed to perform jobs at heights up to 78 metres (255 ft.) or 74 metres (242 ft.) radius without rigging a jib. It is ideal for tower crane erection, with a class leading lifting capacity of 15 t (16.5 US ton) on fully telescoped 80-metre main boom, according to Terex Cranes.

Aaron Hanna, vice-president of sales at Modern Crane, says that the crane’s long main boom makes it a perfect fit for erecting tower cranes; adding that another one of the features that makes this crane a must-have is its ease of set up on jobsites where there are potentially impeding obstacles. The Demag AC 300-6 all terrain crane features a carrier length of 15.3 metres (50.1 ft.) and a width of 3 metres (9.8 ft), and is easy to position thanks to its active  all-wheel steering designed to provide excellent maneuverability in tight spaces.

Modern Crane owner, Mark Williams says that being the first to take ownership of a Demag AC 300-6 will give his company significant advantages in the heavy lifting marketplace.

“It gives us a leading edge being the first in the market with it. We’re always embracing the latest technologies,” he says. “This is the first variable plus outrigger. It allows us to set up in very tight spaces.”

Other features that drew Modern Crane to the AC 300-6 were Demag’s single engine concept with an intelligent motor management system, which should reduce the company’s maintenance times and costs; the long-range fuel tank; its arsenal of safety cameras; and its tire pressure monitoring system. Williams says that the tire pressure monitoring system could pay big dividends.

“It allows the operator to deal with it before it becomes an issue,” he says.

The Demag AC 300-6 also helps significant Demag fleets maintain a lower stock of spare parts because it uses many interchangeable parts with the Demag 5-axle family of all terrain cranes. For more info on the Demag AC 300-6, visit www.cropac.com.