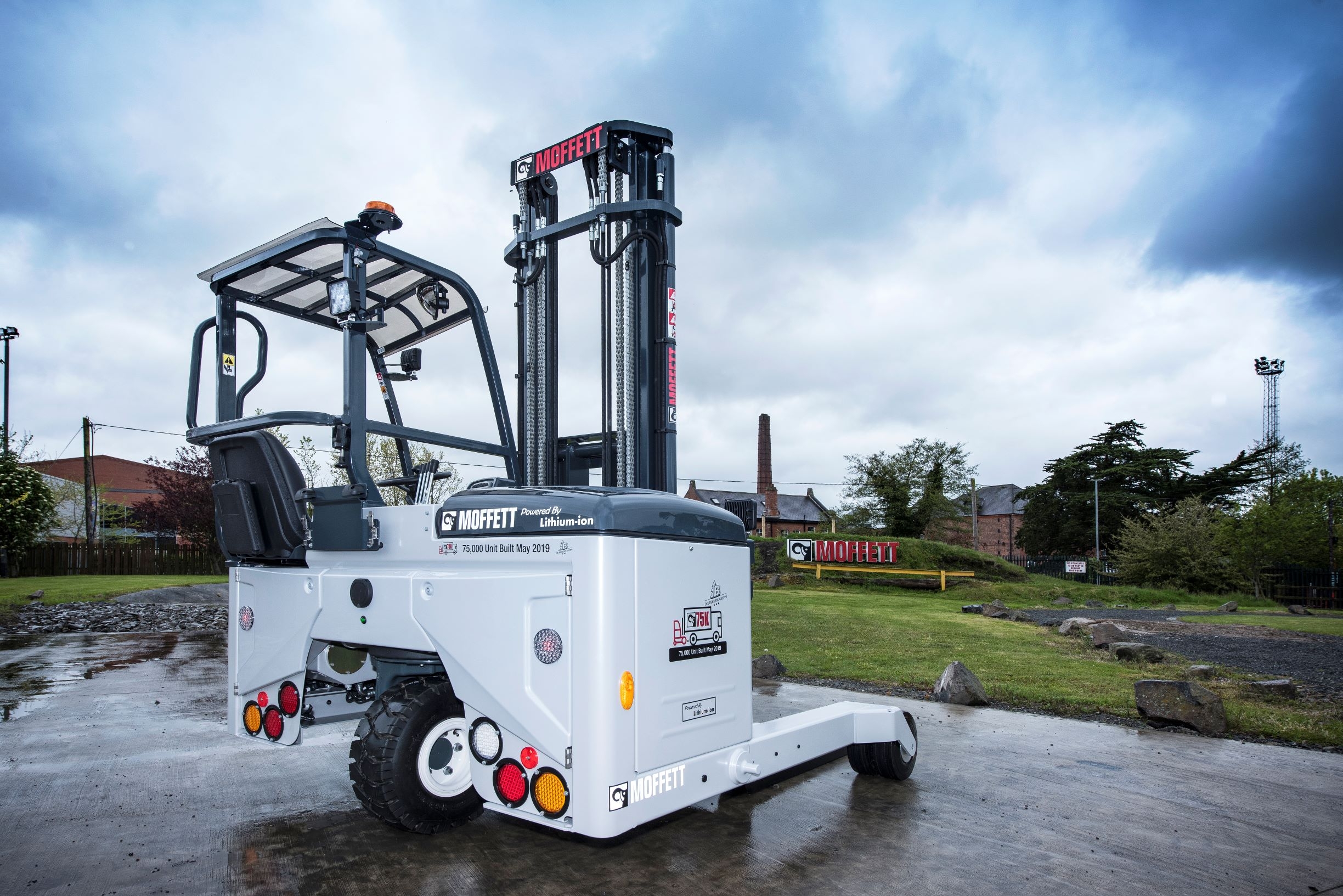 Hiab, part of Cargotec, delivered its 75,000th truck mounted forklift to Die Behrens-Gruppe of Germany. It travelled to the MOFFETT production centre in Dundalk, Ireland, where it was received on May 8. The milestone unit is an emission-free electric MOFFETT E-series that is specially painted and decorated to mark the occasion.

“We specialize in delivering wood products and like the MOFFETT E-Series, which is silent, emission free and environmentally friendly, we produce products from trees that are grown in an environmentally sustainable way, so it’s a perfect delivery solution and product for us,” says Joachim Behrens, owner, Die Behrens-Gruppe.

“It is with a great sense of pride that the Truck Mounted Forklift team in Dundalk marked the occasion of 75,000th unit produced,” Conor Magee, senior vice-president, truck mounted forklifts, Hiab, said. “We are delighted to handover another E4 20.1 Electric Moffett to one of our long standing loyal customers, Die Behrens-Gruppe in Germany. With a fleet of more than 120 MOFFETTs of which over 20 are electric, Die Behrens-Gruppe are a fantastic ambassador for our sustainable truck mounted forklift logistic solutions.”

MOFFETT revolutionised the transportation industry with the launch of the MOFFETT Mounty, a compact three-wheeled forklift truck that could be transported on the back of almost any delivery truck or trailer, and took up virtually no loading space. It was still powerful enough to perform the same functions of lifting, carrying, loading and unloading like a regular forklift but with the ability to negotiate any area from paved surfaces to the most difficult off road conditions.

Today, MOFFETT truck mounted forklifts are sold all over the world and offer an extensive selection of machines for a diverse range of industries and segments, including building material logistics, gas bottle distribution, agriculture, farming and landscaping, urban deliveries, fire & rescue services and utilities. Part of MOFFETT’s success is that the team constantly work with Hiab’s customers to provide new solutions for their load handling and logistics challenges.

“Our products are designed to withstand the environments they work in on a daily basis,” O’Reilly said. “They are built to ensure safe and efficient operation for the users whilst providing the best customer service by delivering the goods exactly where the customers require them.”

In 2013, the company launched the emission free, electrical MOFFET E-series. It is almost silent, making it perfect for urban night time deliveries, which has increased the business hours of operations for customers like the U.K.’s Pets at Home. This approach to reduce the noise associated with out-of-hour deliveries has resulted in two awards. Hiab won the coveted “Archie” trophy at the Fork Lift Truck Association (FLTA) Annual Awards for Excellence in 2018, just after the project received Quiet Logistics accolade at the Noise Abatement Society’s John Connell Awards.

MOFFETT was founded by Cecil Moffett in 1945 in Clontibret, Ireland, as a small engineering workshop producing agricultural machinery for the family farm and other local businesses. In 1996, production of the truck mounted forklifts moved to Dundalk and in 2000, Moffett Engineering Limited became part of Hiab and Cargotec Corporation, rapidly expanding the global sales and distribution network.

At present, close to 400 people work on making and developing the iconic forklift that is used in more than 50 countries across the world, shaping the future of load handling.

“This is a true milestone,” Alexander Gelis, director, sales and product business, truck mounted forklifts, Hiab, said. “It has been achieved by great teamwork between the Dundalk team and our global team of sales and services colleagues around the globe. Thank you for great collaboration.”