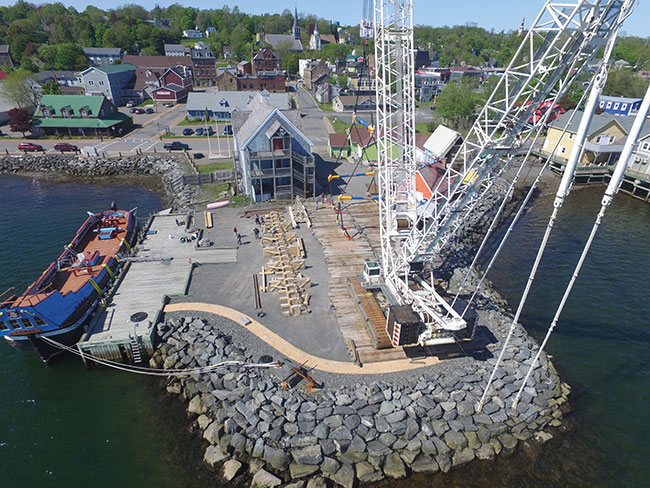 On September 15, 1773, a ship called Hector arrived in Nova Scotia in the Pictou harbour. While there were already Scottish settlers in the area, most had arrived via the United States, making the 189 Scottish Highlanders who travelled on the cargo vessel the first Scottish immigrants to travel directly to Nova Scotia. The original Hector returned to Scotland shortly afterwards, but a replica of the ship was finished in 2000.

Twenty years later, the replica is in need of restoration and the Ship Hector Society will take the opportunity to make enhancements as well, including adding motors to allow the Hector to be more than an attraction on the dock. 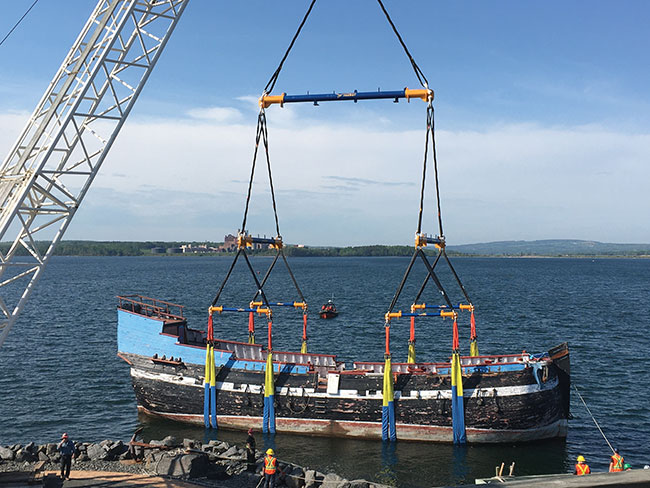 The rigging for the lift was custom made by Versalift out of Texas. Photo courtesy of the Ship Hector Society

“[The replica Hector] was never a sailing vessel,” says Darlene MacDonald, a member of the Ship Hector Society board of directors. “There used to be a Hector festival and a couple of times we towed it into the harbour and did a re-enactment of the landing. But it never sailed. With our restoration, we want to do harbour tours with it.”

In order to perform the restorations, the ship needed to be raised out of the water and placed on solid ground in what the Ship Hector Society dubbed “The Great Big Lift.” A.W. Leil Cranes and Equipment were tasked with the job. Operations manager Robert Fraser says that the company primarily utilized a Terex/ Demag CC 2400 with superlift for the operation because of the limited space on the land by the quay. 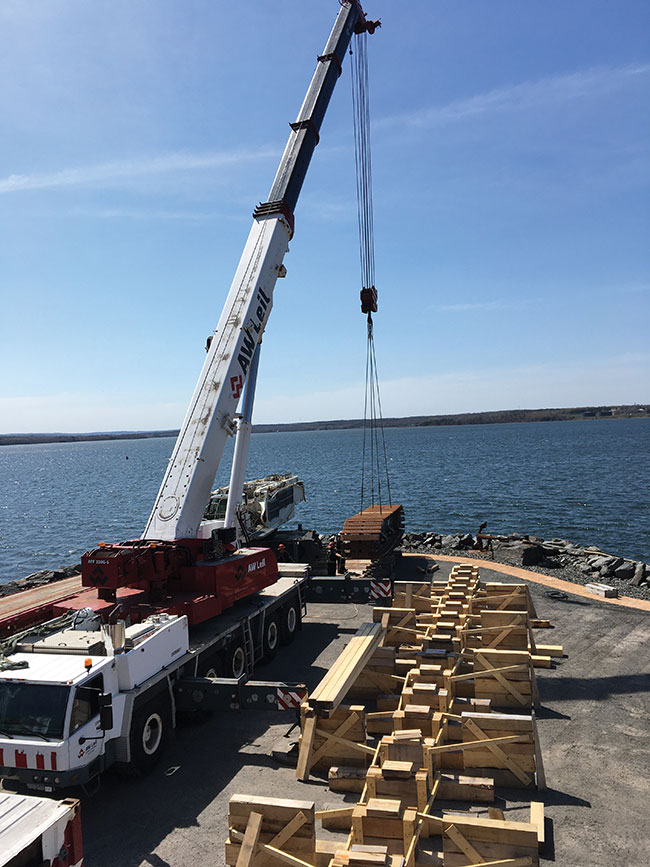 A.W. Leil utilized a T-250 Tadano to assemble the large Terex/Demag CC 2400 crane that performed the major operations for the Great Big Lift. Photo courtesy of the Ship Hector Society

A T-250 Tadano was also utilized to put the large Terex together and another small crane that helped with loading and unloading the weight tray during the lift. Fraser says that the actual weight of the ship was something of an unknown, and they estimated it at 220 metric tons. Once they actually lifted the ship up they were able to take 40 tons off the tray.

“When you’re lifting with superlift, you’re forced to lift at 80 to 90 per cent capacity of your lift because if your tray is too heavy, you’re not going to pick it up off the ground,” says Fraser. “If you can’t pick it up off the ground, you can’t swing or crawl. Once we got it up closer to us, the tray was too heavy to pick up and crawl backwards. With any crane, you have to get that balance figured out.”

The initial plan had been to maneuver the ship to one side of the dock, to moor it off with anchors and boats and rig it in that position. That seemed extremely time-consuming however, so instead, they slinged it ahead of time at the dock where it was normally located.

“When we hooked on to it, we were only good for 15-20 tons out there because we had the boom down flat and no superlift tray,” says Fraser. “But that allowed us to rig the boat while it was still stable and tied off to the wharf, giving us an area to work off. Then we crawled back just enough to keep the slings tight and got into a lifting position where they loaded the tray up.”

The rigging for the lift was custom-made by Versalift out of Texas to the exact specifications needed.

“The ship was coming out to be repaired and was deteriorated somewhat,” says Fraser. “So instead of putting a single strap at four locations, we put two straps in each of the four locations to give us eight straps to add a little bit of extra safety and make sure the boat was going to stay together and not move or flex. We’ve used Versalift different times in the past and they stepped up to the plate and got us the gear for that.”

While the Great Big Lift took several months of planning beforehand, the job itself went off extremely smoothly – they got started around eight in the morning and were finished before noon. But that doesn’t mean it wasn’t challenging. The clearances for the operation were extremely tight, and that’s where the long preparation paid off.

“When we finally got the ship where it’s now sitting, the superlift tray was like six inches from one of the outbuildings and sheds behind the crane,” says Fraser.“When you set the ship down, the tray has to set down at the same time. They could have torn the building down or done some other things, but with the drawing and math and all the measurements we did, it fit in there just like a shoehorn. Between the engineering and all the people involved it was bang-on. You don’t tap yourself on the back too often, but that job really went off flawlessly.” 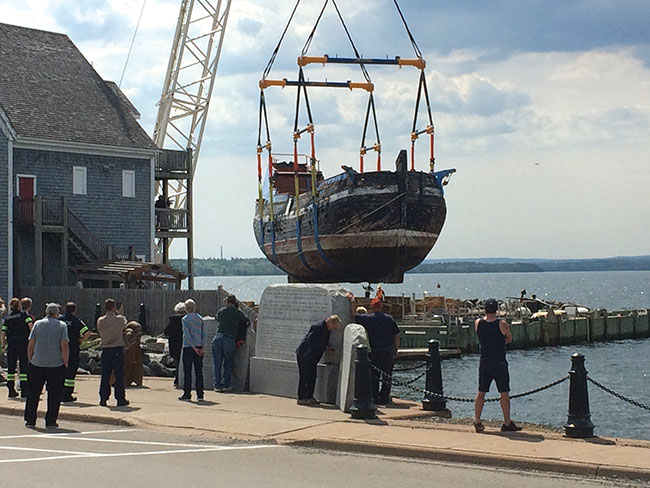 The lift called for extreme precision, with only inches of clearance.
A.W. Leil Operations Manager Robert Fraser credits months of
careful planning for the smooth execution. Photo courtesy of the Ship Hector Society.

Fraser says that while A.W. Leil have lifted bigger, taller, and heavier lifts, the Hector stands out.

“You’re making these big lifts and nobody can see them, you’re at refineries or pulp mills or wind turbine sites and the public can’t get much of an eye on it,” says Fraser. “This was just public, public, public right from day one. Everybody’s talking about it. It was one of those projects that was really drawn into the public eye.”

The original plan for the Great Big Lift operation was to have it as an event that the local community could come out and enjoy. However, the COVID-19 pandemic had other plans, making large public gatherings undesirable to say the least. So, the Ship Hector Society instead decided to stream the lift over the internet. Ironically, this may have resulted in the lift being seen by far more people.

“According to the last update that I looked at just a few days ago, over 51,000 people have now watched the full length,” says MacDonald. “I think the day of, we topped out at like 39,000. And these were people from all over the world, we had over 1200 comments from people as far away as Tasmania, in Australia, all across Canada, all over Europe and through the U.S. watching it live.”