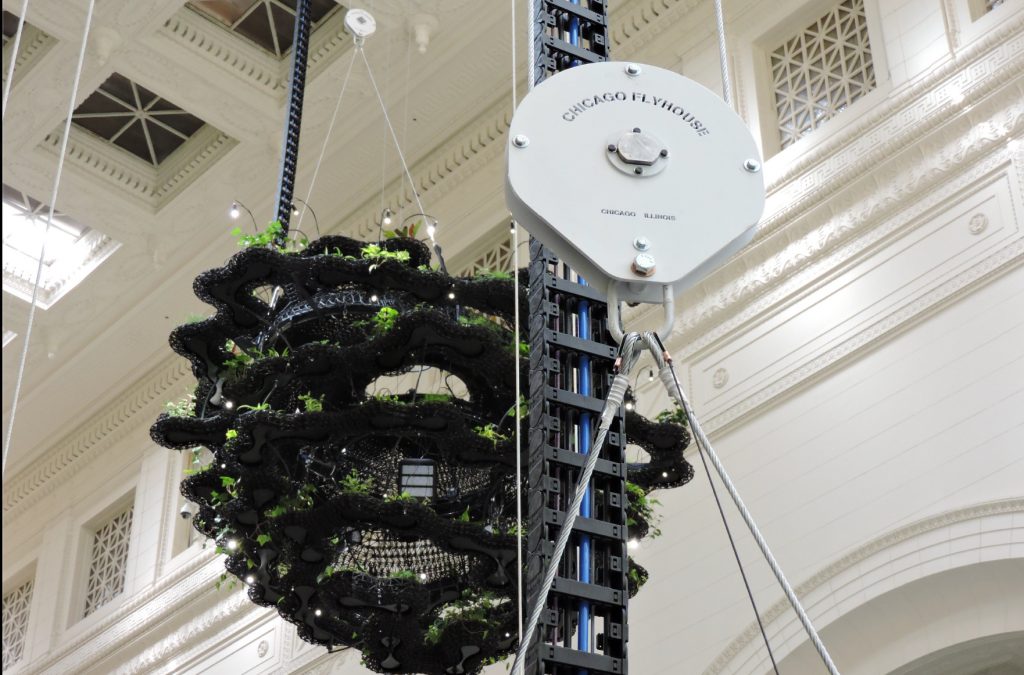 A 75-foot energy chain from igus was used to help hoist four “clouds,” ranging up to 19,000 pounds, in an exhibit currently on display at Chicago’s Field Museum of Natural History. Photo by igus

The team at Chicago Flyhouse is accustomed to handling unusual and difficult projects. The 2019 NCAA Final Four basketball tournament in Minnesota required the fabrication of a flame-retardant synthetic velour to stretch across the perimeter of the 1.75 million square foot venue at U.S. Bank Stadium.

“We specialize in the unique and difficult,” project manager David Millard said. “We often say, ‘When everyone else says no, or that it can’t be done, give us a call.’”

Unlike the Minnesota project, most of Flyhouse’s projects are invisible. The company specializes in behind-the-scenes rigging, design, safety and maintenance. That was the case for a unique assignment at the Field Museum of Natural History in Chicago, Ill.

The task was to design an innovative and safe solution for lifting 28 tons of weight for an exhibit called “Nature Clouds.”

Flyhouse specialists also faced an exceptionally tight workspace in the rafters of the 127-year-old museum to implement its rigging solution.

“This fit the criteria of a unique and difficult project that required immense attention to detail and aesthetics,” Millard said. “That is what we do best.”

The exhibit included four “clouds,” ranging in weight from 5,000 to 19,000 pounds. The exhibit is a hanging garden that showcases plants from a prehistoric era. It is part of the Griffin Dinosaur display at the museum, which attracts more than 1.65 million visitors each year. The exhibit includes the largest and most complete skeleton of a dinosaur ever found. It stretches 122 feet from head to toe and stands almost two stories tall.

The clouds, designed by Branch Technology include 279 printed parts, including 12,000 pounds of vegetation and support weight, 9,600 pounds of steel and nearly 4,000 pounds of printed component weight.

The hoists for the clouds were custom designed and manufactured by Flyhouse. They are wire rope hoists with custom double helix groove zero fleet drums. There are three hoists, two large capacity and one medium capacity, each with a redundant braking and cable management system. They have a lifting capacity ranging between 5,000 and 19,000 pounds.

Over the course of six weeks, Flyhouse worked in the ceiling of the museum to create the infrastructure to support the weight of the clouds and other hanging items. Workers hauled supplemental steel and automation equipment to the ceiling as it designed and engineered a massive working platform and transported all the equipment from the ground to the ceiling. 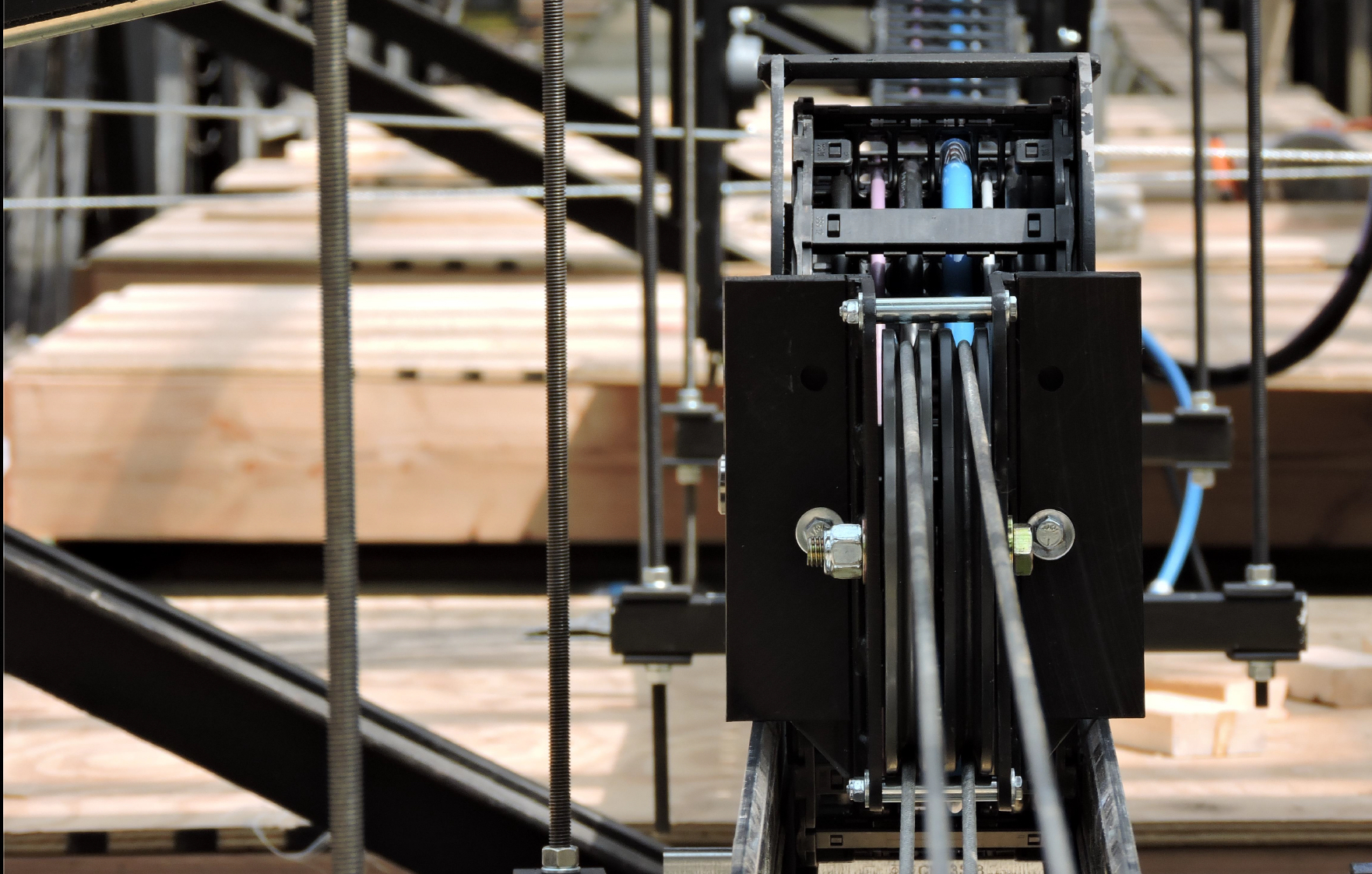 The energy chain includes chainflex cables from igus that provide water, power and fiber optic to the clouds. Photo by igus

“We did all the rigging during regular hours while no part of the museum was closed to visitors,” Millard said. “This required us to develop a custom suspended floor structure that was capable of supporting 28 tons over a 1,250 square foot surface that acted as a hoist and as a protective layer between our work and the general public 75 feet below us.”

One of the biggest challenges that faced the Flyhouse team was working in an attic with limited maneuverability and space to install the hoists. “The largest challenge was creating hoists with enough capacity to quickly move the clouds, but also small enough to fit them within the very limited existing space and doing so onto the existing steel structure with multiple mechanical obstructions,” Millard said.

Besides the hoists, Flyhouse workers also needed to devise a cable management solution with an energy chain from igus, the Germany-based manufacturer of motion plastics.

The solution they implemented included a 75-foot energy chain. They created a pulley that pulled the chain at the bend, instead of the pushing or pulling from the end. The chain also carries data cables from igus to help sustain the plants.

“Since we are moving the middle of the chain, it moves at twice the speed of the pulley at the bend in the chain, making in sync exactly with the moving cloud,” Millard said.

While the energy chain is standard for igus, what is unique is the way in which it was used. “Supporting it at the centre with our custom pulley and controlling its movement from there instead of one of the ends is what makes this unique,” Millard said.

Brad Stanley, the igus representative who supported Flyhouse with the design, said he considered other options, but travel length, cost and lead time required to manufacture a different solution made them consider the energy chain.

“Flyhouse came up with the use of our standard e-chain in an unorthodox, long travel application,” Stanley said. “It would lower and retract the e-chain from the ceiling and require about 40 feet of space in a linear manner to accommodate the e-chain when it was fully retracted into the ceiling.”

An important feature of the energy chains from igus is its capacity to include chainflex cables. The cables provide water, power and fiber optics to the plants. Four of the chainflex cables, such as those for fibre optics and air line for water, are 100-feet long. There is also a 300-foot cable, which is typically used in heavy duty indoor applications and in high bay warehouses, packaging machines and indoor cranes. The cables have a long service life and require little maintenance. 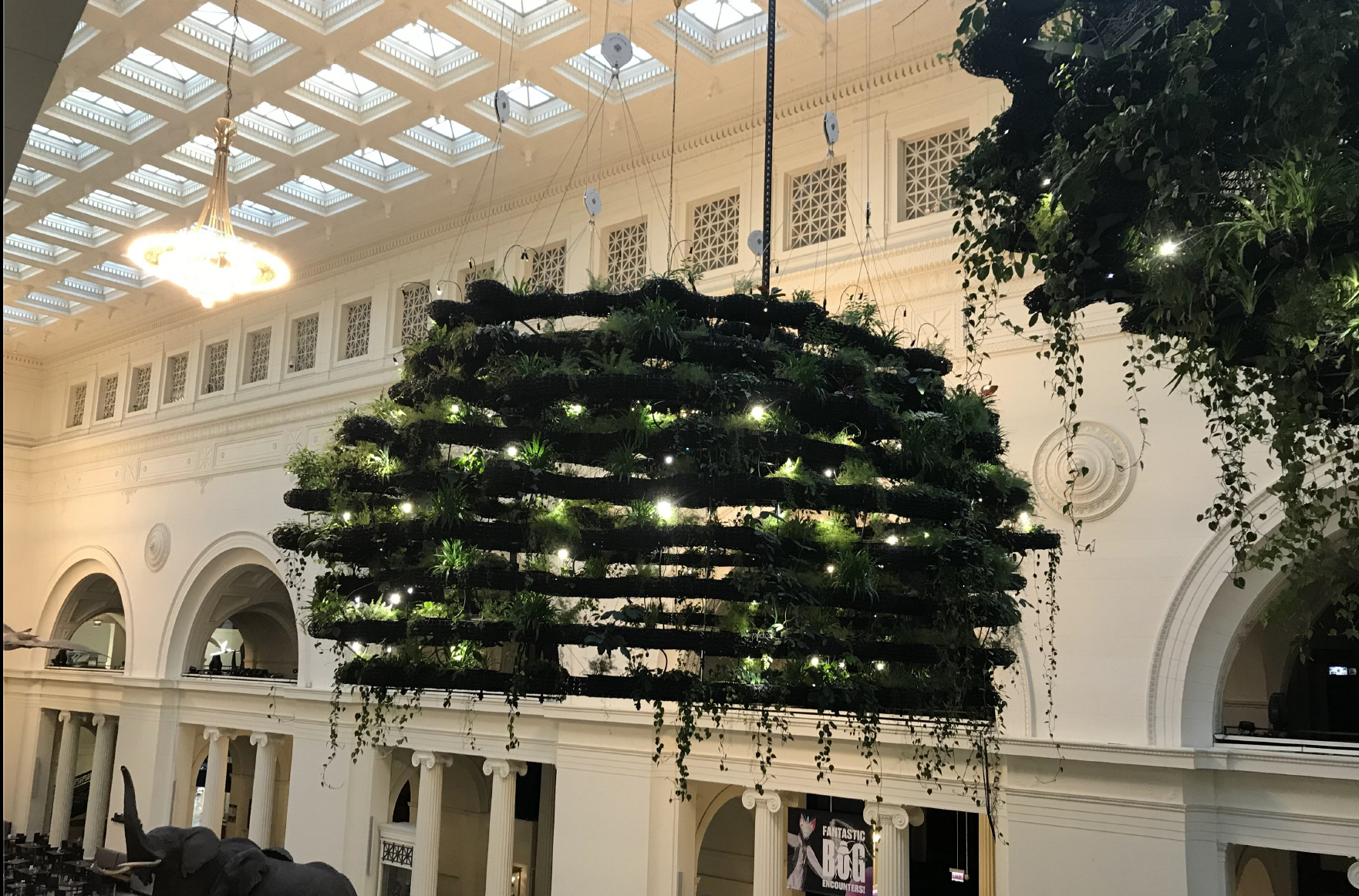 The team from Chicago Flyhouse designed a rigging system with the igus energy chain that supports 28 tons over a 1,250 square foot surface that is 75 feet above walking areas accessed by the general public. Photo by igus

“It has been our experience that cable reels are unreliable in the long term and we needed a solution that was going to mechanically move the cable and hoses in sync with the hoists,” Millard said. “The key was to prevent the system from adding complexity, such as synchronized motors.”

The energy chain needed to be wide enough to accommodate all of the various cables. “This particular chain was sized around the fill package which was provided to us by Chicago Flyhouse,” said Stanley. “If there would be additional needs to pull new cables, there is room to do so provided our rules of separation with any energy chain are met. We’d simply consult with each other on what was needed additionally and come up with the best way to achieve it.”

Even for the experienced team at Flyhouse, the project required an unusually long time to devise the eventual solution. Its team spent more than a year developing the feasibility of the overall design before determining how they would lift and move the clouds.

“We spent time setting up factory mockups of the clouds and worked actively with the engineering firm that designed the 3D printed structure and skeletal frame of the cloud,” Millard said. “We provided active feedback from the lessons learned in the mockup and helped them modify the design to work well as a suspended object to make sure it fits all of our criteria for the safety of lifting overhead, including the ability to handle an abrupt stop and the resulting shock load in the event of an emergency stop or secondary brake lock.”

Stanley Hall at the Field Museum is 21,000 square feet—more than four times the square footage of the basketball court, such as the one for the project at Minnesota—and is one of Chicago’s premier event spaces for weddings, galas and more.

Hilary Hansen, senior exhibition project manager for the museum said the gardens and other features add a sense of incredulity. “The plants make the hall come alive—they look beautiful and underscore our mission to study and preserve the natural world,” she said. “They’ll break up the imposing scale of Stanley Field Hall and soften its hard materials, making it a welcoming place to sit and enjoy nature.”