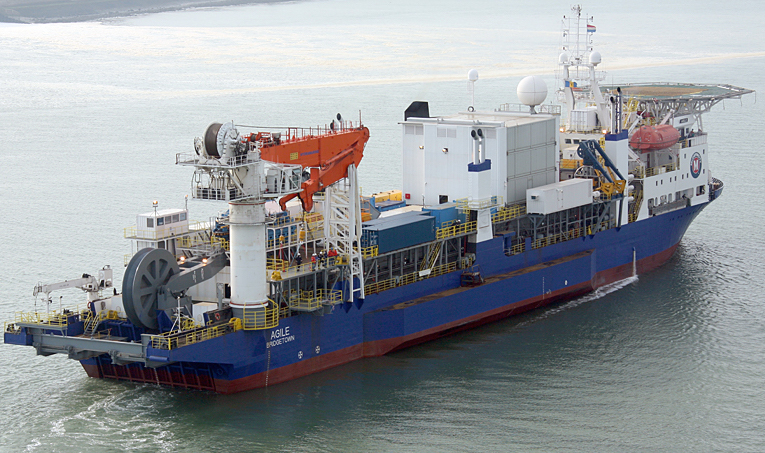 Lengkeek Vessel Engineering Inc. installed a crane on the Agile Ship to install turbines for the Cape Sharp tidal energy test project on the Bay of Fundy

OpenHydro, an Ireland-based tidal energy company, recently contracted Nova Scotia’s Lengkeek Vessel Engineering Inc. to design a barge with a lift capacity of 1,150 tonnes to install turbines for the Cape Sharp tidal energy test project on the Bay of Fundy.

“A heavy lift barge is a little bit out of the norm for us, but something like what we’ve dealt with before,” said Rory MacDonald, vice-president and co-owner of Lengkeek, which is based in Dartmouth. “The unusual part would be the heavy lift component of it, but we’ve been involved in heavy lift components in other jobs. We’re not crane experts, but we’ve certainly gotten involved in a lot of projects that do involve cranes.”

One of those projects was the conversion of the Agile — a cable-laying vessel — into a pipe-laying vessel. This involved a major reconfiguration of the vessel both on and below deck.

“Our challenge is integrating the crane into the ship’s structure to ensure it’s seated properly and can handle the load,” said MacDonald, whose company specializes in naval architecture and marine engineering. “A lot of our work is refits and conversion work, especially on larger vessels. It’s often easier to do a refit or a conversion on a larger vessel than it is to build one from scratch. We get involved in that quite a bit.”

One of the more complicated areas of Lengkeek’s work involves the preparation and planning leading up to the installation of a crane on a vessel. Often, the location a crane is to be installed is dictated by arrangement and MacDonald’s team may not have any choice. If the team has a choice, a vessel motion study helps determine where the ship’s motions will be most compatible with the crane’s function. But ensuring the crane can truly become a part of the ship is the tough part.

“The biggest challenge is making sure that, structurally, the ship can be converted or modified to accept the crane,” MacDonald said. “The large one on the Agile, there’s a lot of structure that had to be tied into the ship. Then you have to look at how far that structure has to be extended — you can’t just plunk it on the deck and expect it to be good.”

A pedestal is essential to support the crane and to ensure safe operation. This might mean bracing the pedestal deep into the bowels of the vessel. Once Lengkeek engineers devise a structural arrangement that seems sensible, they run it through an in-depth analysis to identify areas that might need to be reinforced or rearranged.

“You have to check if the accelerations are too high for it or if the angles on the arm don’t suit it,” MacDonald said. “There’s no point in setting a crane on it if it won’t work operationally.”