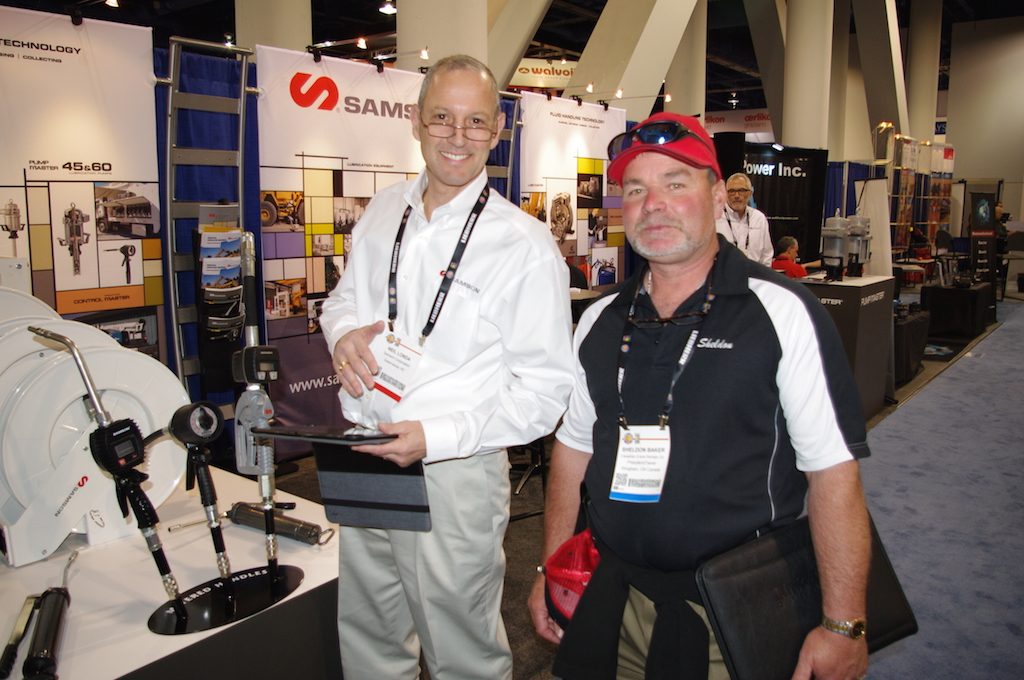 A search of the ConExpo website lists 142 exhibitors from seven provinces — B.C., Alberta, Saskatchewan, Manitoba, Ontario, Quebec, and New Brunswick. Among them are several firms in crane-related businesses, such as Cranesmart Systems (booth G72016) and Weldco-Beales Manufacturing (G73507), both of Edmonton. Alberta’s 14 exhibitors also include Ultra Seat Corporation (N10371) of Acheson, Alta. That company makes seats for heavy equipment, including cranes.

However, the ConExpo website search widget has its limitations. For example, a search of B.C. exhibitors did not find Penticton-based Brutus Truck Bodies, which is sharing space with Italian truck-crane manufacturer Next Hydraulics S.R.L. at booth G3125 in the Gold Lot.

However, a search did reveal 23 other B.C. exhibitors, including Crane & Hoist Canada magazine.

“We’re really looking forward to returning to ConExpo for the third time, and the second time as

Joining Thain at the Crane & Hoist Canada booth will be art director James Lewis, and editor Keith Norbury. They will each take shifts at the booth, where they expect to meet scores of Canadians as they did at the 2014 show when their booth was in the Gold Lot amid the towering booms of the crane displays. The Crane & Hoist Canada contingent will also visit as many other exhibitors as they can to shoot photos and take notes.

At the 2014 event, attendance at ConExpo and IFPE totalled 129,364, reported the Association of Equipment Manufacturers, which produces the show. That was the second highest total ever, surpassed only by the 144,600 attendees in 2008, just before the financial crisis.

Of the 2014 attendees, 24 per cent came from outside the U.S., the AEM reported at the time. The association didn’t have an estimate for the number of Canadians attending, but judging by all the Canucks that the Crane & Hoist Canada trio encountered at the show, it fair to say that about 10 per cent of ConExpo 2014 visitors were from this side of the border.

Among them was Sheldon Baker, president and owner of Canadian Crane Rentals Ltd., which is based in Wingham, Ont. He said back then that he was impressed by the increased traffic flow compared to the 2011 show.

“I was here three years ago and optimism wasn’t as strong,” Baker said. “People weren’t quite as content.”

In 2014, the Alberta economy was booming. However, since then oil prices have collapsed, taking the Alberta economy down with them. Many of the Canadian visitors to the ConExpo 2014 were from Wild Rose Country. It’ll be interesting to see how big the Alberta turnout is this time around — if only for a respite from the cold weather than can still chill the province in early March.

Quebec is next with 28 exhibitors. Among them is Montreal-based CM Labs Simulations Inc., the maker of Vortex crane simulators, which again shares a booth with the OETIO.

“ConExpo is a fantastic show,” Clark said in via email. “The scope of it alone makes it worth attending, and CM Labs will be there in full force. We can’t wait to exhibit with OETIO and showcase our newest training solutions for test drives.”

Saskatchewan, with 11, Manitoba, with eight, and New Brunswick, with one, are the other provinces with exhibiting companies at ConExpo 2017. That single New Brunswick exhibitor is Craig Manufacturing Ltd., a Hartland, N.B., company that recently installed new overhead cranes as part of a 25,000 square foot addition — a project featured elsewhere in this issue.

ConExpo has various product categories for cranes. They include all-terrain (54 exhibitors); gantry (24 exhibitors); lattice-boom crawler (39); wheel-mounted crawler (2500; rough-terrain (41); and tower cranes (25). There are also 28 exhibitors categorized under hoist, 23 under wire rope, and eight for crane attachments.

Other exhibitors related to cranes include Van Beest USA LLC, Miller Lifting Products, Harrington Hoists, WireCo WorldGroup, and Industrial Training International, which is headquartered in Woodland, Wash., and has a training centre in Nisku, Alta.