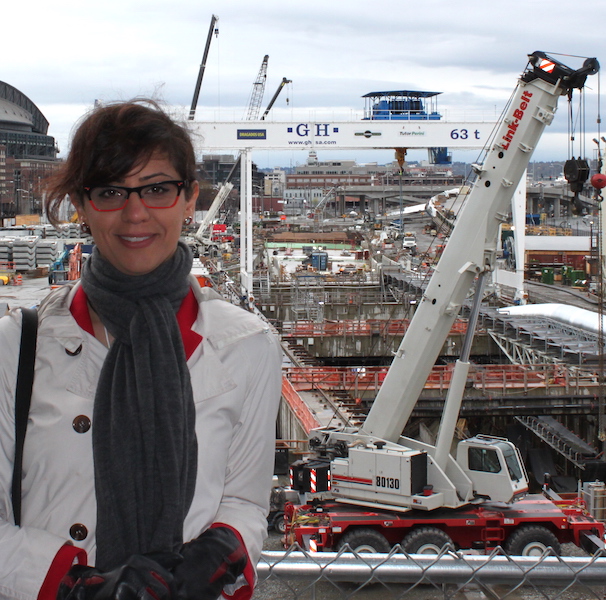 Want to reduce equipment collisions at your construction site?

Efforts to reduce on-site collisions have been an ongoing challenge. In recent years, work crews have turned to automated and “smart” systems, including proximity warning and distance detection systems, to determine potential contact collisions

Generally, an alarm is triggered when a threshold is violated. However, analog and even digitally transmitted alarms often fail to correctly and predictively reveal dangerous situations.

The problem, according to Jun Wang and Saiedeh Razavi of McMaster University, is these

warning systems tend to generate a significant number of false positives and negatives, which translate as false alarms.

“False positives bring disruptions to work and eventually cause alarms to be disabled or ignored by participants,” the authors explained. “False negatives fail to signal actual risks when entities are involved in hazardous situations.”

Wang, a PhD candidate in civil engineering, and Razavi, an associate professor who is the chair in heavy construction at the university’s Department of Civil Engineering, present a potential resolution in their joint paper, 4D Models Effective in Reducing False Alarms for Struck-by-Equipment Hazard Prevention.

for real-world implementation, the paper presents two four-dimensional models. One model is time-sphere, the other time-cuboid, and the intent is to reduce the rate of false alarms.

In each 4D model, Wang and Razavi collected “entity state” data such as 3D position, orientation (roll, pitch, and yaw), and velocity, analyzing it over time.

Noting potentially hazardous spaces surrounding workers and their equipment, using spheres and cuboids with a designated warning zone, Wang and Razavi adjusted and updated according to available information. Then, using conventional 3D factors such as relative position, moving direction and speed, they developed and employed a series of unsafe-proximity query rules to identify and predict contact collisions.

“The effectiveness of the developed 4D models was evaluated through simulation and field experiments,” the authors wrote, explaining that the two 4D models have a strong capability for reducing false alarms — or, technically speaking, false positives and negatives.

Through simulation and actual field experiments, Wang and Razavi explored a variety of potential collision scenarios.

Along with accounting for motion and speed, the authors considered the time it takes personnel to react to warnings and then execute actual preventative collision-avoidance measures.

To underscore the importance of preventing collisions, the authors cited existing workplace safety data that 16 per cent of fatal occupational injuries in the U.S. in 2013 resulted from hazardous contact with equipment and objects, and that construction equipment operator fatalities accounted for between four and six per cent of total construction fatalities in the U.S. in 2008 and 2009.

“Contact collision between workers on foot and equipment or between equipment and equipment is a great threat to the safety and health of construction personnel,” the authors explained, adding that reducing the frequency of false alarms stands to improve productivity and site mobility as well as safety.

While 4D systems can improve collision predictability and avoidance, challenges lie ahead in terms of developing robust and near-real-time data communication between the warning devices and the Internet.

Wang and Razavi added that the dynamic generation of alert zones is needed based on the entity involved — say an excavator or particular kind of crane — and whatever activity is underway.

“In this paper, the adopted countermeasure on receiving an alarm is braking for equipment and stopping movement for workers on foot,” the authors wrote. “Other responses based on path planning and optimization will be considered and integrated into the 4D models to form a more comprehensive approach for contact hazard prevention.”

While a sensor would be affixed to a piece of equipment, workers on foot would need them, too, the authors noted.

In an interview, Razavi and Wang said their study was largely motivated by the need to improve safety at construction sites.

With current systems sending alarms when actual situations might not warrant alarms, there’s the risk of workers incorrectly presuming all alarms as false alarms and therefore failing to heed those warranting attention, they told Crane & Hoist Canada.

The ultimate goal, Razavi and Wang said, is a zero-injury culture, and both acknowledge their research models don’t apply to mishaps such as workplace falls.

And while their research does apply to worksite collisions, there are multiple factors at play, including crane work. While Razavi and Wang did not look specifically at cranes, they said their models most certainly do apply to hoisting equipment.

“Crane load and swing have a high possibility of collision with existing infrastructure, equipment and people, for which the developed models in this study can be applied to prevent hazards,” Razavi said.

The two researchers said any success in enhancing safety also stands to improve the mobility and productivity of equipment and workers on-site.

However, at the end of the day, the challenge is ultimately making sure workers and equipment are all connected and communicating digitally and reliably.

“My slogan is stay connected, stay safe,” Razavi says. “All of these technologies are relying on people to somehow be connected to each other or to the other infrastructure elements. So, by letting the information flow in real-time, we can help protect them.”