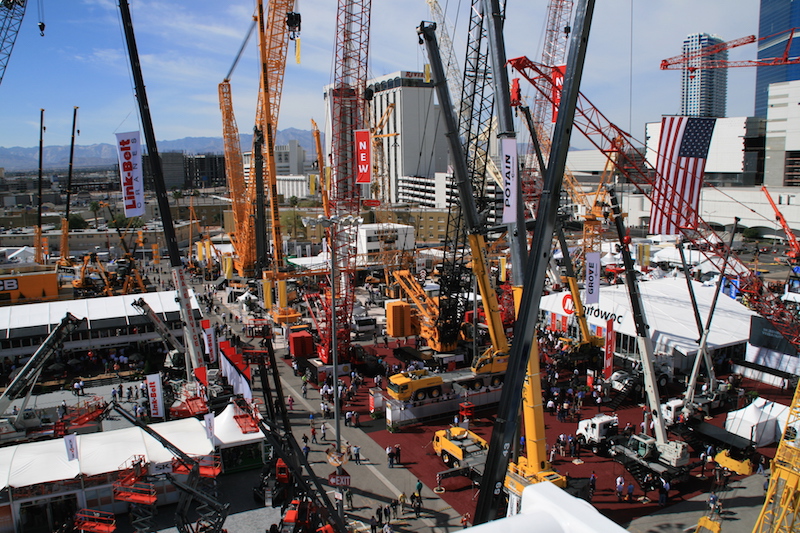 Readers of this magazine attending the ConExpo-Con/Agg heavy equipment trade show in Las Vegas this March are invited to drop by Crane & Hoist Canada’s booth at the triennial exhibition.

This will mark the magazine’s third appearance at the show, and the second time it has its own booth at the event, which takes place March 7-11 at the Las Vegas Convention Center. This time around, Crane & Hoist Canada will occupy booth G73321 in the convention center’s Gold Hall, with editor Keith Norbury, sales manager Jeremy Thain, and art director James Lewis alternating shifts.

Just look for the Canadian flags. We’ll be looking closely at show badges as well. So don’t be

surprised if one of us yells, “Canada!” when we spot a visitor from Alberta, Ontario, the Yukon, or any of the other provinces and territories.

At the 2014 show, we convinced dozens of Canucks to have their photos taken at the booth. So be prepared to smile.

We’ll be watching for you

The combined attendance in 2014 of ConExpo and the co-located International Exposition for Power Transmission totalled 129,364. Twenty-four per cent of show visitors were from outside the U.S., according to the Association of Equipment Manufacturers, which organizes the event. The AEM didn’t have a figure for the Canadian attendance, but 10 per cent would be a conservative estimate based on badge sightings.

“Naturally, our booth attracted a lot of Canadian visitors attending the show in addition to fellow exhibitors looking for ways to increase their product exposure in Canada,” Thain observed following the 2014 ConExpo. “As a first-time exhibitor at the show, we were very pleased overall and specifically found the event an excellent opportunity to connect face-to-face with the many supporters of the publication.”

Three years ago, the magazine exhibited in the Gold Lot, amid the shadows of the towering crane booms of the massive stands of Terex, Liebherr, Manitowoc, Link-Belt and the like. This year, the Crane & Hoist Canada booth is indoors, in the Gold Hall, next to ForgeFX Training Simulations (G73420) and Sterling Lumber, a maker of crane mats (G73323), and across the aisle from Liftmoore Inc., a maker of truck cranes (G73313), and F & M Mafco Inc., a manufacturer of after-market cranes parts (G73320).

“Visitors will be able to test drive any of our three new Vortex Advantage Simulators (including motion platform), along with two desktop simulators,” said a recent email from David Clark, product marketing manager with CM Labs Simulations, who will be attending his first ConExpo in March. “These simulators will be running CM Labs’ Construction Suite training modules, including mobile and tower cranes, as well as wheel loader, excavator, and backhoe training modules.”

A search in late January of the ConExpo website revealed 150 exhibitors from eight provinces. That was eight more Canadian exhibitors than listed in earlier searches, as we reported in the last edition. In one notable change, the more recent ConExpo website search correctly identified Penticton-based Brutus Truck Bodies as a B.C. company. Brutus is sharing booth G3125 in the Gold Lot with Italian truck-crane manufacturer Next Hydraulics S.R.L.

The website now identifies 26 B.C. companies, compared to 23 previously. Meanwhile, Ontario now has 61 exhibitors, up from 57. Quebec has 29, up from 28. Alberta has gone to 15 from 14. Saskatchewan has 12, up from 11. Manitoba has nine, up from eight. And New Brunswick has doubled its contingent to two.

Overall, the number of exhibitors is too large to list. Aside from the dozens of crane exhibitors — 54 listed under rough-terrain cranes alone — the exhibition features scores of listings under accessories such as hooks (21), and wire rope (33).

“The show is really busy,” said Darren Darnley, a sales representative with Nanaimo-based VMAC vehicle mounted air compressors, during the 2014 show, his first visit to ConExpo. “It’s important to get your name out here. There are a lot of big players here. It’s good to be ahead of the game with the latest and greatest and kind of stay on top of things. As a me-to company, you want to make sure that your new products are out there and being displayed.”

Also new to ConExpo is the Tech Experience pavilion, which encompasses over 75,000 square feet. Described on the ConExpo website as an “immersive, future-forward showcase that allows you to see what’s possible tomorrow, today,” the Tech Experience features a 3D printed excavator, simulator training, and solar roadways demonstrations.

This year’s ConExpo features more than 130 education sessions, not including repeat sessions, in 15 different tracks. Those tracks include cranes, rigging and aerial lifts. (See related story). Attendees can purchase tickets for single sessions, day passes, or passes for the entire conference.

Among the other ConExpo highlights are the NASCAR Experience at the Las Vegas Motor Speedway on March 10, and a concert by classic rock bank Foreigner on March 8 to benefit the Call of Duty Endowment. The concert at the Brooklyn Bowl “was made possible through a generous donation from Terex Corporation,” notes a posting on the ConExpo website. Attendance for that is limited to the first 2,350 people to register and make a suggested donation of $29 to the Call of Duty Endowment.

At the 2014 ConExpo Terex hosted a show by ZZ Top at The Joint, a 4,00-seat showroom in the Hard Rock Hotel and Casino. And later that week, REO Speedwagon performed a free concert downtown on Fremont Street.