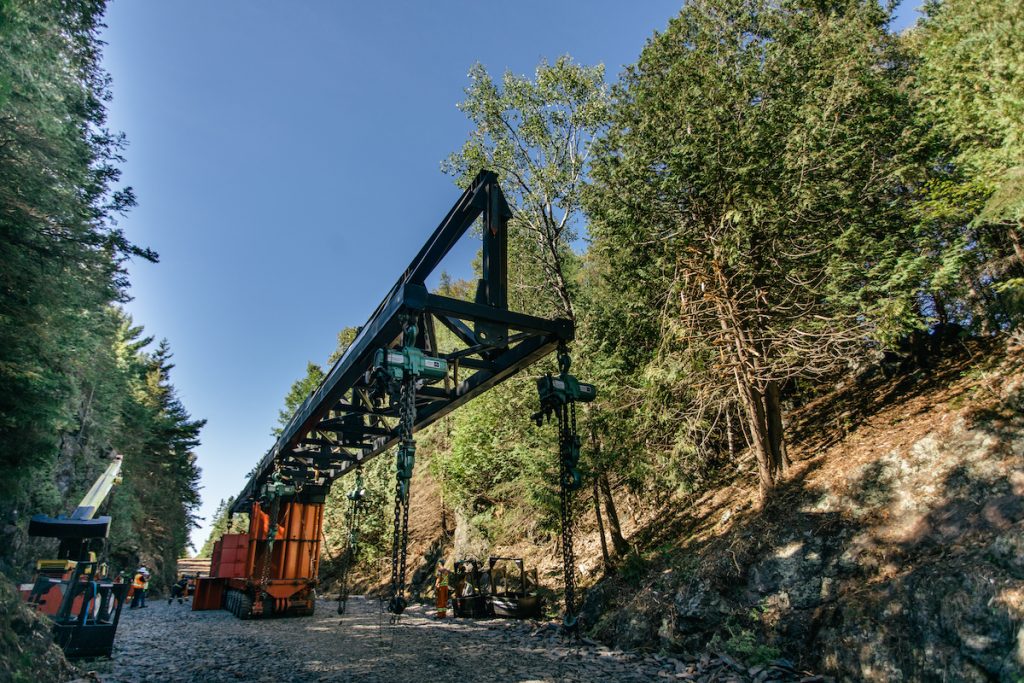 Irving Equipment was challenged with removing a 60-foot-long, 58-ton rail bridge earlier this summer in New Brunswick. The site was restrictive, the accessway was narrow, and the likely option of using a crane would have required Irving Equipment to bring in too much fill. So, the company met the challenge with what it called a self-propelled cantilevered truss hoist.

“A crane pad would have required us to bring in so much fill, it would have basically filled in a beach on some neighbouring property and we did not want to do that,” said Ryan Long, director of business development at Irving Equipment, which is based in Saint John, N.B. 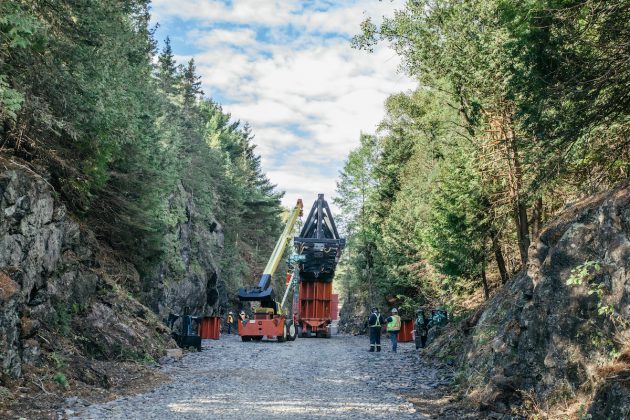 The re-engineered SPMT could fit through the narrow accessway easier than some other pieces of equipment may. Photo courtesy of Irving Equipment

Julien Raby, engineering manager at Irving Equipment said they took some of their self-propelled modular trailers (SPMT) and engineered them into a machine that could get the job done. A SPMT is a trailer with hydraulic suspension that is computer controlled and modular where you can attach or combine them in any nature; side to side, end to end. SPMTs can be remotely paired so there is no physical connection between them.

“Once given the challenge of not using a crane, we sketched a concept out on paper of what we could use with the tools we already had in our toolbox,” said Raby. “We ended up with 12 lines of SPMT, two modular six lines connected.” 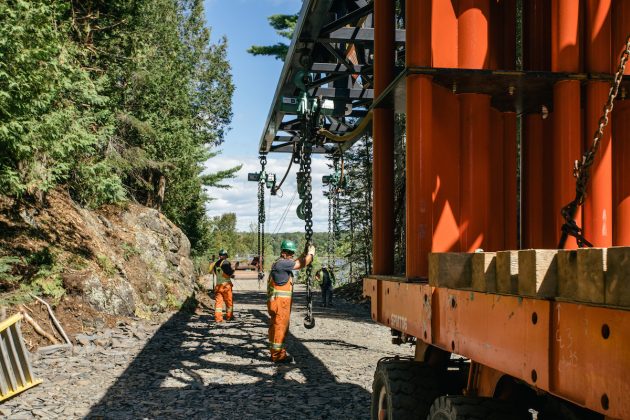 The team repurposed a 100-foot-long truss that Irving Equipment had from a previous project meant to lift modules, which isn’t what the truss was designed to do. The team had the machined analyzed and found it needed structural upgrades that they completed in the yard.

“We cantilevered the arm out close to 55 feet, which allowed us to pick up the 60-foot bridge using air hoists,” said Raby. “We ended up with 264 thousand pounds of counterweight shifted at the back end of the trailer to lift the bridge. Essentially acting like a seesaw, same way a crane does.”

Irving Equipment said its customer owned a series of decommissioned rail bridges that were a liability to them and wanted them removed because ATV operators and other people were using the old rail beds as a throughway and jumping cliff.

“The customer wanted that liability removed,” said Long. “There were five bridges total. We secured a fixed-price contract to remove all five.”

That’s when Long said the SPMT cantilevered beam came to light and that it would have a nice narrow footprint. The goal was to minimize any impact on the environment. 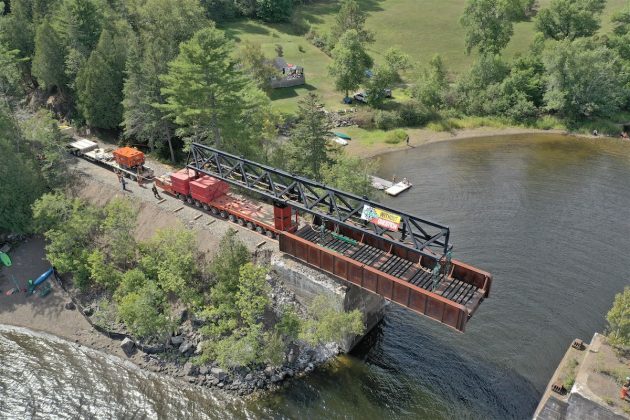 Pictures and a video of the removal were filmed from GoPro cameras attached to a DJI Mavic 2 Pro drone. Photo courtesy of Irving Equipment

“From an environmental point of view, we wanted no debris in the water from a piece-by-piece dismantling of the bridge and certainly wanted no impact to the neighbouring beach. We had to take it away in one whole shot. There was almost no additional fill material used than what was required for the SPMT. And the bridge was removed in a single piece. We basically cut a few bolts with a torch and that was it. No excessive dust and debris, or pieces of rail ties left behind. It came out very clean,” said Long.

The site also had significant rock cut and a slope. Irving Equipment brought in Gulf Operators, a civil construction and excavation company, to complete all the pre-emptive work needed to gain access to the bridge through a farmer’s field.

“There was significant rock cut and a 14 per cent grade descent,” said Long. “Gulf Operators prepared the sites for us to remove the bridge.”

Another challenge facing the crew was the whole project was built around an estimated weight.

“Due to the age of the bridge, there were no drawings available. So, the weights we had been working off were done by a take-off estimate done by our engineering department. Throughout the project the team basically nailed it on their estimates,” said Long. “You can imagine if the team had been off by 10 or 20 per cent, we could hit the up button on the hoists and the thing wouldn’t budge. And that’s a potential risk.” 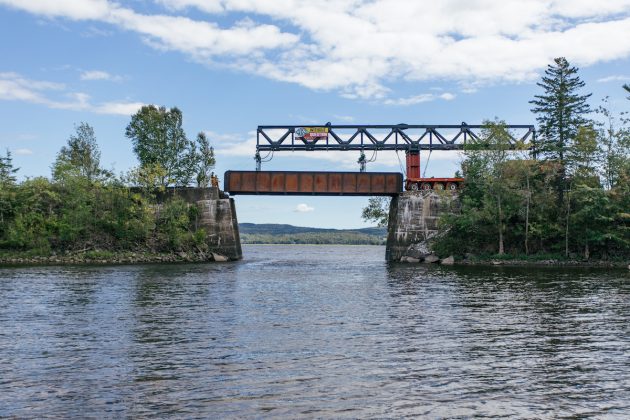 The actual bridge removal took two days to complete. The equipment was disassembled from the yard on Aug. 31 and brought to the site. The next morning the equipment was re-assembled and the bridge was removed that afternoon.

“We took out five bridges and the one we used this machine on was the fourth,” said Long. “It took from June through October to remove all five. We started to make plans for this particular bridge in early August. So, it was a really big effort with a dedicated team to develop and prove this concept so quickly. We relied on a couple of subcontractors to do some of our fabrication for us, sister companies of ours, and it was a very quick turnaround.”

The four other bridges were able to be removed through typical crane operations. Raby said a project highlight for him was trying something new and seeing it completed successfully.

“It’s the classic story of being told your idea is odd and not going to work,” Raby said.

“Then working through the numbers and sketches and showing that it would work. And proving in our yard that it would work before we moved forward, then executing the job and making it work. Also, having the freedom to test these new concepts is great.”

Long said he appreciated having a customer who was willing to try and entertain something different.

“The project was a chance for us to think outside the box and use existing tools in a new way. At the end we were all really happy and satisfied that we managed to pull it off as a team. Safely,” said Long. “It was all the things you would want. Before schedule. Under budget. And safe.”

The success of this project encourages the team at Irving Equipment to think of more creative ideas for future, similar projects.

“Using SPMTs in an unconventional way makes you think of how to look at other jobs differently and approach them from a different angle. Sometimes a crane isn’t always the tool for the job,” said Raby. “You can do other things that may end up being safer or more cost effective.”